Mary Dimercurio Prasad: Review of Animals on Board

Each player has his own ark and wants to take as many animals on board as he can. Unfortunately, some guy called Noah claims all animal pairs for himself and has obtained an anti-pairing law. Therefore, any animal that a player has exactly twice on board at the end of the game must be discarded. However, you can circumvent the law if you manage to gather three, four, or even five animals of a species. These are considered a herd and are not only permitted, but are even more valuable. It could be so easy if it wasn’t for one small issue: to form a herd, there usually is no way around getting a pair first… When the arks depart, will you win the game by having the most valuable single animals and herds on board? (From the rulebook.)

The goal of Animals on Board is to have the most valuable animal collection at the end of the game. Each player receives an “ark” – a rack that holds 10 animal tiles. The game ends after the round in which at least one player has 10 or more tiles.

Before the game starts, each player receives one food crate (food is public knowledge) and three animal tiles, from which each player chooses one – the other two go to the middle of the table. At the beginning of each round, the animals in the middle of the table are replenished, according to number of players, and made into one group. There will always be one face down/hidden tile in the group at the start of the round.

On a player’s turn they may either split one animal group (i.e. adjacent animal tiles) and take a food crate tile OR take one animal group, paying one food crate for each animal in the group, and drop out of the round. Animal tiles are placed in the player’s ark (rack). If the player is the first to drop out, that player receives the first player flag for next round. As soon as there is only one player left in the round, that player gets one final turn and then the round ends. 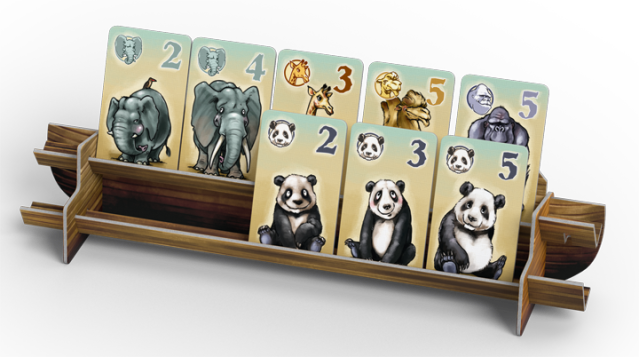 A player may only have 5 food crates max. If a player would receive a 6th food crate, as a penalty that player must instead reduce their food to 4 (ouch!).

Each species of animals has five tiles, numbered from 1 to 5. The number of species in the game is driven by the number of players. At the end of the game, each player removes any animal species on their ark of which there is only one pair. If the player has over 10 tiles, the extras are discarded (player’s choice but may not keep an exact pair of any species). Players score the point values printed on single animals. All other animals (groups 3 or more) are worth 5 points each. Food crates are worth one point each. The winner is the player with the most points (tiebreaker is the player with more different species types).

For full rules see the files section of the listing on BGG.

Animals on Board is a wonderful family game or a light filler. The gameplay is simple – only two possible actions on a turn – but there is enough there to make it interesting. How you divide the animals and when to take animals are the big decisions. If you can remember the animal types others are picking up, you could try to take them yourself or put them in with low-numbered animals they aren’t collecting, but in my opinion, it makes the game more tedious (plus my memory sucks). Mostly I try to separate animals of the same type, even if I’m collecting them (e.g. they are too attractive to other players, even if they aren’t collecting them). I also try to break up the higher numbered animals, placing them with the lower numbered ones. If I’m collecting several types of animals, then I may put low valued ones of those in with one higher animal that I don’t have, hoping to keep it as a single for scoring (as long as no one else picks them up first!). 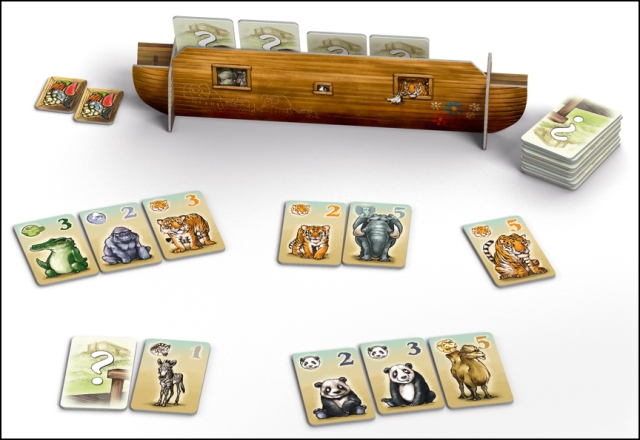 Players should keep an eye out for the end of the round and end of the game. If the round ends, the last player will only get one more turn and if that player doesn’t have enough food, they might get nothing for that round. This could be a good thing since that player will most likely have more food for the next round thus giving them more flexibility (as long as they don’t go over 5 food). Note: players may want to fill the bottom row of their racks first so other players may see how many tiles have been collected rather than having to ask.

The game scales pretty well, but I think I prefer it with 3 players. The 2 player has a different feel since it’s more a head-to-head game. It’s a bit more like “Chicken” – who’s going to end the round (since it will end after the next turn once a player takes tiles).

My biggest complaint about the game is the number of tiles/species for the number of players. Depending on the player count there will be 15-20 tiles per player in the game. Note that 10 is the max number of tiles a player can keep for scoring, although there is a chance a player may gain a couple more tiles than that. This means that there will be a lot of tiles out of the game at the end, i.e. there may be species players are collecting from which only one or two tiles show up during the game (or a species that doesn’t even come out). This randomness is what I don’t like.

To mitigate this, I think a more gamer-y version would be to play with 5/7/9 species (i.e. 25/35/45 tiles) for 2/3/4 players respectively. If by chance some players collected enough tiles to short the stock in the middle of the table on the last round, then so be it, the rest can take one food to finish the round. I plan to try this next time I play.

The artwork is really nice. The animals are just so cute as they “grow” on the tiles from 1 (baby) to 5 (full adult). The components are high quality, thick cardboard. Initially you will need to assemble the “arks” (racks). Use care when punching out the components as to not rip the paper surface. The racks work really well.

The rules are well written, attractive, and contain photos/examples to help visualize what’s being explained. (I only wish there was a variant like mine above!)

The game is easy to learn/teach, fairly short, and fun to play. It definitely deserves to be a Spiel des Jahres nominee. http://www.spiel-des-jahres.de/spieldesjahres

Greg S:  I was hearing positive buzz about this game prior to my arrival at Alan Moon’s Gathering of Friends, so was anxious to try it. I found the game decent, but nothing special. As Mary indicates, I, too, was bothered by the large number of tiles that will not appear during the game, which could totally dash one’s plans and strategy.

The game is certainly one that should appeal to the family market, but I feel there isn’t much here for gamers.

Dan Blum (5? plays): This is definitely very light, but it’s fast, cute, and has some interesting decisions. I have not been bothered by the tile randomness, but I agree that Mary’s proposed variant sounds reasonable for those who are. My main complaint is that the giant arks, while serving well enough as tile racks, do not fit comfortably in the box with the rest of the components – you can get everything in there but it’s more work than it should be.

[Mary Prasad: Dan’s right about the box. We put the arks on one side and the tiles in standing stacks on what’s left over (the food crates and flags are in a baggy next to the tiles), although first tilt of the box and they go all over. The alternative of a larger box doesn’t appeal to me though – we have too many games and not enough space.]

Dale Y: If I were a jury member, this would be my personal pick for the game to win the 2016 Spiel des Jahres. For me, it has the right balance of accessibility, ease of teaching/play, short playing time and attractive graphics that have been hallmarks of recent winners. This game employs the “I split/you choose” mechanic to perfection.

The face-down animal in each batch gives a modicum of unpredictability to the game, and that little bit of uncertainty makes the game much more interesting because you’re never quite sure what your opponents are collecting (and conversely, if you have a face-down tile, no one else knows what exactly you are looking for!)

The game ends really quickly – and I’m not talking about just on the clock – as the game ends when at least one player has 10 tiles, the game might only last 5 or 6 rounds, and if you’re not careful, you could be quite surprised if someone unexpectedly takes a big group to trigger the game end.

After about eleven plays, I’m a big fan of this one, and my enthusiasm for it has not slowed after repeated plays.

Here’s Chris Wray’s review of Animals on Board.

More about me at: http://awashwithcolor.com
View all posts by Mary Prasad →
This entry was posted in Reviews, Uncategorized and tagged board games, Eggertspiele, reviews, Stronghold Games. Bookmark the permalink.

2 Responses to Mary Dimercurio Prasad: Review of Animals on Board