I was lucky enough to have the possibility to play Kepler-3042 before the end of the kickstarter campagin and I want to share with you my first impression.

In the game you have to try to get points sending your ships exploring the galaxy and colonizing new planets. It is a 16 turns game and you can colonize at most 5 planets and you can have, at most, 3 ships in play. So, first impression, it is a really tight game where all the decision are important. You will get points also for terraforming your planets and from the colony and technology tracks. Finally every player has a secret objective card.

During your turn you can take one actions (from the 9 possible); if you want you can burn resources to have 1 or 2 more special actions and, finally, you will move your ships.

In the beginning of the game the galaxy is almost unknown. During the game you will reveal face-down hex that can be planets ot mine. Planets can be colonized (every planet will offer a different amount of points/resources/colony bonuses) and mine can be mined.

Almost all planets (apart for the 4 aliens ones) can be colonized but you need the right knowledge in terraforming to terraform most of them.

The right choice between technologies developing and other actions is another interesting mechanic of the game. You can’t execute the same action two turn in a row. Most of the action, including developing, can be performed multiple time in the same turn so it is better to plan well your actions.

A good idea in the game is the mechanic of the resources. You have a fixed number of resources you can produce. Using the special actions will burn you resources that will be not available any-more for productions (you have 1-2 possibility to get back this burned resources but is not easy). On the other side special actions are good and can quick your developing a lot. How much often to burn is another difficult choice.

I really liked my Kepler-3042 session. The game has a solid mechanic and you have a lot of choice. Probably it lacks player’s interaction (apart for the race in the technology and colony tracks and for few planets colonization) but it is not a major problem.

The different position of the planets and the events (you have to draw an event card in the beginning of each turn) probably will offer enough variety and replaybility. Despite to the sci-fiction theme it is much more on the German side than on the American. Mechanics win against theme in Kepler-3042, but the mechanic fits really well with the theme.

I’m going to play this game again for sure. 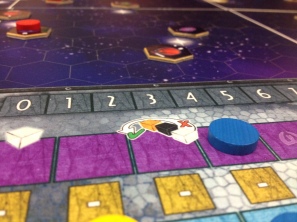 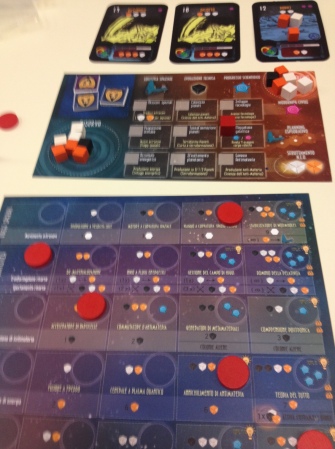 Andrea "Liga" Ligabue is a game expert contributing to many games related international projects including Gamers Alliance Report, WIN, ILSA Magazine and Boardgamenews. Member of the International Gamers Awards Committee is coordinator of Play - The Games Festival and founder of the project Ludoteca Ideale.
View all posts by Andrea "Liga" Ligabue →
This entry was posted in Kickstarter, Preview, Uncategorized. Bookmark the permalink.