Many years ago, I once poked fun at Herr Doctor Knizia for continually re-releasing the same games over and over.  It seemed like every year, you could buy some slightly tweaked version of an older game that was really familiar to you.  About fifteen years later, I’m still making the same sorts of comments of Dr. Knizia’s games, but now very much with a feeling of respect.  Say what you will about his games, but Knizia has made a career out of this sort of thing, and more power to him.  Let’s face it, if his games sucked (which they generally don’t), he wouldn’t be able to sell them to you and then sell them to you again a few years later!

Zero is another game which I’ve seen in the past.  The version which I first became acquainted with was the 1998 Berliner Spielkarten version in the bright green box – though BGG has an earlier 1991 version listed by AG Mueller!

In the game, you have a deck of 56 cards; 7 colors numbered 1 to 8.  Each player is dealt a hand of nine cards, and the next five cards from the deck are dealt face up to the center of the table to form the “pool”.  All other cards which were not dealt are out of the game this hand. 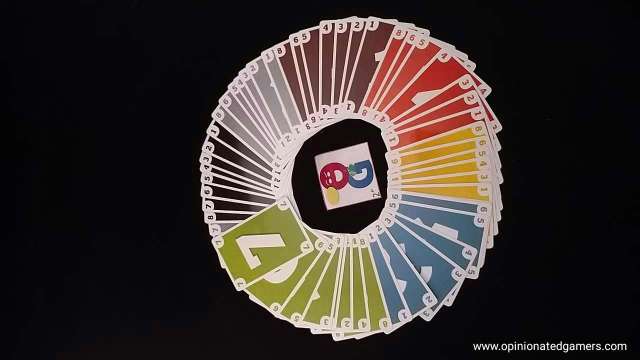 Players then take turns in clockwise fashion around the table.  You really only have two options on your turn – Swap Cards or Knock.

If you choose to Swap cards, you take one of the five face up cards from the Pool and replace it with one of the cards which was in your hand.  If you are able to form a ZERO hand after swapping  – you announce this immediately and the hand immediately ends. (more on scoring in a bit)

Now, it’s time to evaluate the hands.  The goal is to have the lowest score possible, ideally ZERO.  There are three basic scoring rules.

Record the scores with pen and paper and then shuffle all the cards together. Play a number of hands equal to the number of players in the game and then total up the points.  The player with the fewest points is the winner.

When I first played the game (around 2000), it was felt to be a decent filler.  Back then, I was still being introduced to games that were more complex than Uno! and Monopoly, and Zero was a nice change.  I had yet to have a drawerful of over 200 different card games, and as I didn’t have a lot of other options, this one made it to the table a fair amount.

Over the years, I’ll admit that we haven’t played it a lot.  In fact, I was surprised to find that I still had my green Berliner Spielkarten version when I went digging for it in the basement archives.  The game hasn’t changed any – it’s still a nice quick filler, but it’ll never be more than that.  The game works, it’s generally fun, but it’s nothing that I’m clamoring to play more than once or twice in a session (or month).

Each hand goes by relatively fast, so it doesn’t outstay its welcome.  In my old group, there was definitely a group strategy of early knocking if you were dealt a great hand.  If I would ever get a hand that scored 25 or less in the first two turns, I’d generally knock and try to force an early end to the round. Sure, I knew that I’d be scoring a fair number of points, but I’d be hoping to catch other players off guard and not give them enough time to get to any five card sets.  Usually, that would put me in an advantageous position.

The one problem that we started to see was that in a 5p game, this often meant that 2 rounds each game met an early demise as the chances of someone being dealt an early low scoring hand were pretty high.  My current group hasn’t been as lucky, and we haven’t seen this little bit of groupthink come to the surface yet… but we’ll see if it does after our next game session!

On a side note, as a game tinkerer/developer – this one does provide you with a nice set of cards for counters or other proxy bits in other games.  Not quite as good as a Rage deck, but it’ll do in a pinch for all sorts of things.

The new version comes in a nice small box, and the cards do have a nice background effect that will help colorblind players.  It’s still a decent filler, and it’s also a nice game to have around for casual gaming with younger players or non-gaming friends.

The idea of the game is simple – have the highest score at the end of the game – which itself is triggered when a player has 50 or more points.  There are 6 dice in the bag – a larger die which has 3 grey sides, 2 orange sides and 1 green side.  The 5 small dice are identical: three grey “1”s, two orange “2”s, and a single green “3”.

If there was a match, then the player gets to decide if he wants to stop and bank his points (i.e. score them permanently by writing them down on paper) or if he wants to push his luck and re-roll the dice.  If he re-rolls and fails to match colors, he loses all points from this current turn.  If he matches, he adds the newly scored points to his previous total and then decides again to push his luck or not. 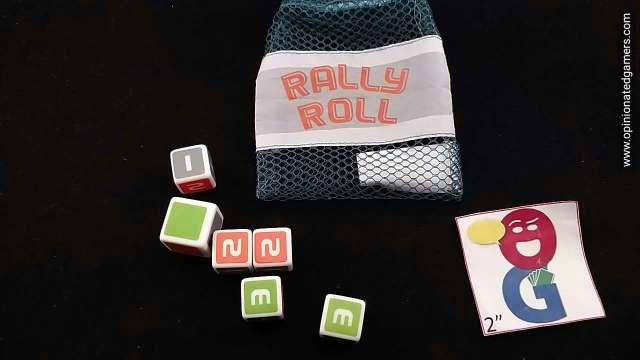 The game continues until a player has banked 50 points or more (unless the sudden death end game condition was met).  At this point, all players have a single additional turn to try to score points with the player who triggered the final round getting the last turn of the game.  The player with the most points after this final round is the winner.

This is a deceivingly simple game that I’m surprised hasn’t been devised and published by someone else earlier.  The decisions are pretty simple, and it’s easy enough to tabulate your running score during your turn.

The rules are quite simple, and they fit on a single leaf of paper which is itself folded up into a tiny little rectangle.  Possibly in an effort to save space, they have left out a fairly critical clause in the rules about the scoring – from watching a demo of the game, it does appear that you only score points for number on small dice “which match the color of the large die”.  However, the part which I placed in quotes in the last sentence was left out of the rules, and it could easily be construed that you score for all the numbers on the small dice.  These few words make a huge difference in how the game is scored and played.  I assume that we played the game as the designer intended (based on the demo that I saw), but we had to make that interpretation on our own.

Each turn lasts only a minute or two, and getting a running total of 20 or 30 in a turn is quite possible.  The biggest challenge is figuring out when to stop.  Thus far, in my two games, I’m trying to get myself into the 40s and then bank to stop my turn there (usually takes either two or three scoring turns).  At this point, I’m now in good position to push far past 50 if I’m going to trigger the endgame myself OR close enough to get a good run to overtake the leader if I’m chasing.

There’s not a lot to the game, but its immense portability likely gives it reason to stick around.  It’ll likely be thrown in a glove compartment, soccer bag or carry-on to serve as an emergency time killer for an unexpected layover, soccer rain delay, etc. 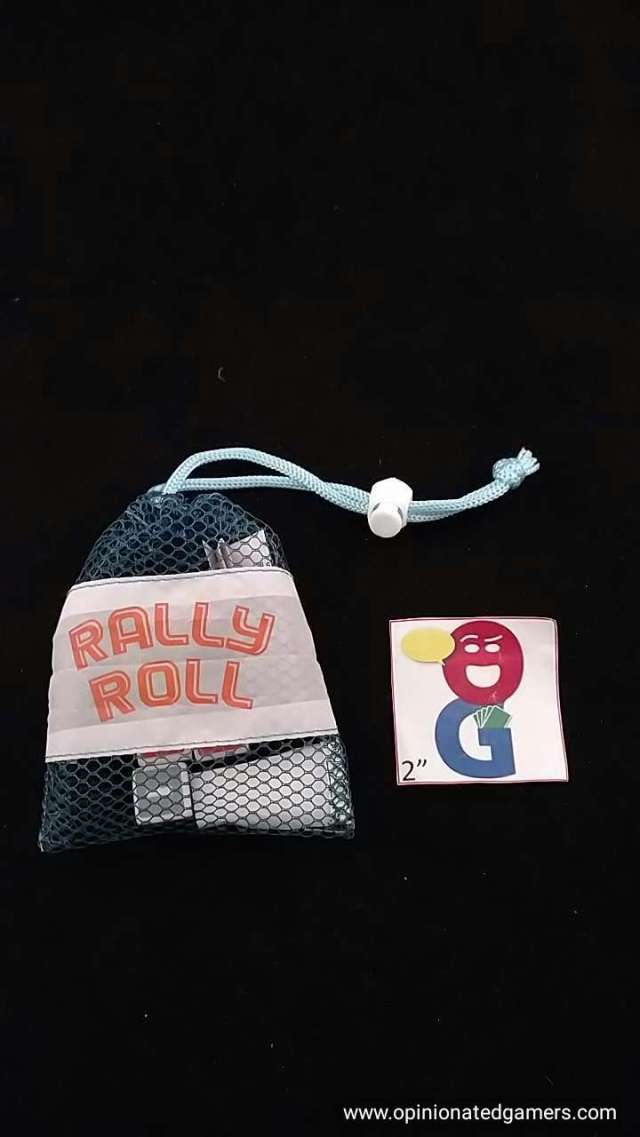