Geekway to the West 2017 (Convention Report by Chris Wray)

I look forward to Geekway to the West every year.  Held in the St. Louis metropolitan area, Geekway is a staple of the gaming scene in the Midwest, especially among us Missourians.  This year’s convention sold out in record time, and it attracted more than 2,000 attendees from across the country.

I’ve been going for several years now, and this year Geekway felt bigger and better than ever before: it is truly starting to feel like a national convention, complete with an exhibitor hall and all of the events you’d expect from a major game event.

As 2017’s convention season gets underway, I wanted to write my thoughts from this year’s Geekway.  I spent most of the convention playing my favorite games from Gen Con and Essen 2016, but below I did do four mini reviews of new or new-to-me games: Frogriders, Gloomhaven, Not Alone, and Wordsy.

The Best Parts of the Convention

There are a few aspects of the experience that make Geekway special.  The best part is the Geekway team, which is the most welcoming I’ve seen.  It takes an army of volunteers to put on the event, and nobody does it with the smile, enthusiasm, or talent that the Geekway team does.

The attendees are also great.  I go to a lot of conventions — 6 or 7 a year — and other than the tightly-knit invitationals, Geekway always has the friendliest crowd.  This has grown from an event of a few hundred attendees to a few thousand in a short period of time, but Geekway is still a word-of-mouth event, and it shows with how many groups of friends attend.

When you walk in the door, you get a free game or two, drawn at random.  They’ve got an impressive array to hand out.  I got Island Fortress this year, which is a game I really enjoy, so I was happy with the draw!

After registration, most people take advantage of either the library or the play-and-win room.  The library is enormous, one of the most well-stocked game libraries I’ve seen.  It isn’t quite as big as the BGG library, but it is close, and the coordinators do a good job of anticipating what the hot games will be.

That said, the play-and-win room seems more popular than the library.  They have several copies of the hot games from Gen Con or Essen, and attendees can check them out.  When they return them, they put an entry in the drawing, and at the end of the convention, names are drawn and attendees take the games home.  Hundreds of games get given away on Sunday, and I knew several people that took home games they loved.  (Geekway buys many of the play-and-win games, but for the publishers that donate, the play-and-win has to be one of the best marketing investments out there.  Each copy will get from dozens to hundreds of people playing it, and many of those folks enjoy it and subsequently buy a copy if they don’t win it.)

There are also all of the events you’d expect from a major convention, everything from a trade table, to a flea market, to tournaments, to nightly Werewolf.  On Saturday night, there was fancy gaming, in which people dressed up in suits and tuxedos to play games.

The event moved to a new spaces this year — the St. Charles Convention Center — to accommodate the increased crowd, and the venue was top notch.  Parking was reasonably easy to find compared to other conventions, the events were easy to get to, and most people seemed to enjoy the hotel.

Geekway has always had a number of exhibitors, but this year was the first year where I felt the exhibitor hall had reached a decent scale.  Everybody from Stronghold Games to  R&R Games to Indie Cards & Boards was there, and it was nice seeing some of the publishers/designers that start doing the rounds this time of year.

Overall, this was a great event, and the Geekway team deserves an enormous round of applause!

Each year, the Frogriders hold a tournament, and whoever manages to make the use of the frog’s special abilities will emerge victorious!  The game starts with a large number of frog miniatures on the board in four different color.  Each different color of frog has a special power, and when you make the jump over a frog, you keep it and then can either (a) save it for scoring, or (b) return it to the village to use its special ability.  Depending on the color, some frogs give you extra points, others give you new ways to move, et cetera.  Each game has a slightly different scoring system (some are set collection, some are majorities), so there’s a high degree of variability between plays and a high degree of replayability.

Frogriders was easy-to-learn fun, and with a 20-30 minute playtime, I could see this working in a variety of gaming situations.  Jumping the frogs around the board felt like an abstract game — kind of like Checkers or TZAAR — but by mixing it with set collection and special powers for each color, the designers made a mashup that worked very well.  The theme was unique and playful, and the molded frog pieces were a nice touch.  We enjoyed our play, and I look forward to riding some frogs in the future. 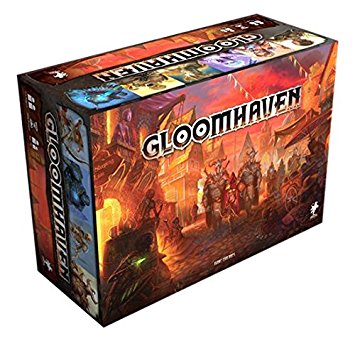 Gloomhaven is certainly one of the hottest games of recent months, and it currently sits at #6 in the BGG rankings.  At its current average rating, it’ll likely become BGG’s #1 game in the coming months.  Clearly a lot of people love this game.

I’m not one of them.  I was eager to try it — I’ll try any game once, particularly if it is getting good buzz — but doubt I’ll play this again.  I don’t mean to be a curmudgeon, but I simply don’t get the appeal, and I don’t think a lot of people I play with will enjoy this either.

Gloomhaven is a cooperative dungeon crawler, one that is reportedly Euro-inspired.  Each player takes a character, and they have to engage in tactical combat to clear various rooms in a dungeon.  Along the way, they’ll help their character level up, so there’s a big of a “legacy” aspect.

The combat is card driven, and each card can be used multiple ways, but you have to manage your hand carefully to not exhaust it before you’re out of the dungeon.

I found the game clunky.  There’s a lot of bookkeeping involved.  And I also found it internally repetitive.  Play a card, attack a bad guy, maybe beat him, maybe don’t, hope you don’t get damaged too much, and then rinse and repeat.

This seemed similar to Imperial Assault, another game I wasn’t a fan of, although I liked this better than Imperial Assault.  Basically, Gloomhaven is what you get if you mix Imperial Assault with an RPG (and I also don’t play RPGs).  As I said above, this was reportedly Euro-inspired, but this seems like the heart of Ameritrash.

In the end, this seems like an objectively fine game, maybe even an objectively great game (if you ignore the clunkiness and repetitiveness), but I’m just not the target audience.  I don’t really get dungeon crawlers.  Nor do I get the appeal of this theme.  I’m more into mechanics than story in games, and this feels more thematic (and less mechanically interesting) than what I’d hope for.

I think Gloomhaven will appeal to a very narrow band of the hobby.  And that narrow band will likely adore this game and catapult it high into the rankings.  But I’m not in that narrow band, so I have to say this isn’t for me.

My Initial OG Rating: Not for me…

Not Alone has gotten a decent amount of buzz in recent months, and Stronghold is on a hot streak, so I was eager to try it.  Not Alone is an asymmetrical one-versus-many card game, in which one player (the Creature) plays against stranded explorers (the Hunted).

At the start of each round, each Hunted will play a card representing a different location around the crash site.  They’re trying to wait until help arrives, and the locations help them do that in various ways, everything from discovering new locations, confusing the Creature, and getting back the ability to explore locations they’ve already used.

Unfortunately for them, the Creature chooses what locations he will stalk.  If he ends up at the same location as the Hunted, the location is ineffective, and the Creature makes progress towards assimilating them into his world.

I suspect I’m “not alone” in how much I enjoyed the game.  (Go ahead and moan!)  The game is really about bluffing and hand management, and the one-versus-many mechanic works very well here.  The artwork was attractive, and the theme was engaging.  We played with three players, and I think this would work better with four or five, but it was a fun experience.  Like most great asymmetric games, Not Alone invoked that “now I want to try the other side!” feeling at the end of the game.  A member of my game group bought it, so I’m sure it’ll get play time in the future.

Wordsy was one of the highlights of the convention for me, and it was the only game I bought.  This word game from Gil Hova is easy-to-learn, clever, fast-paced, tense, and laugh-out-loud fun, and I’m hoping I’ll get my Scrabble-loving mother to fall in love with this instead.

Each round, 8 letters (always consonants) get flipped up in sets of two.  The first two are worth 5 points, the next two worth 4, the two after that worth 3, and the final two worth 2.  Each player studies them, trying to discover a word that uses as many of them as possible (or at least earns as many points as possible).

The first player to write down a word flips a 30-second timer. That player is now the fastest player, and every other player now has 30 seconds to write down their word.  At that point, players score their word, taking points for the letters they used from the display.  Some rarer letters (like Q or V) are worth extra points as shown on the card.

After 7 rounds, players add the scores their best 5 words, plus their bonuses. The player with the most points wins!

If you like Word games, I bet you’ll like Wordsy.  This is a fun challenge, and I ended up playing it three times at the convention, and everybody I played with seemed to enjoy it.  The game plays quick and is easy to teach, and it takes the most fun parts of games like Scrabble and condenses them to their core.  I’ll be doing a full review in the next few weeks. 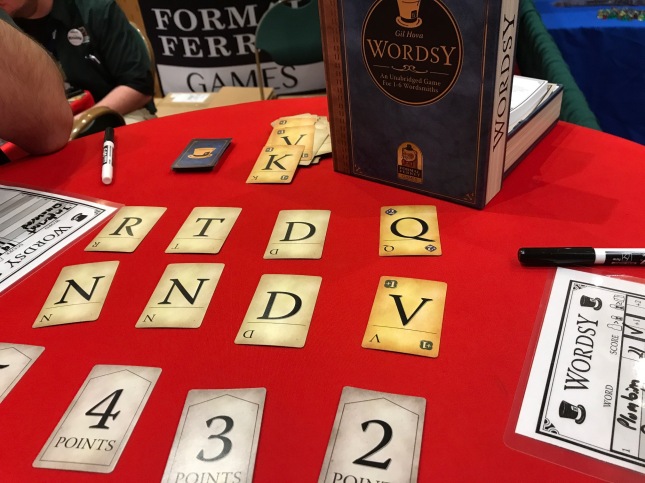