Kerala is the name of one of the provinces of India which is well known for its elephant sanctuaries.  In the game Kerala, players try to collect and arrange colored elephant tiles to make the most magnificent fairground (i.e. personal tableau of tiles).

At the start of the game, each player gets the start tile in their color and places their two elephant tokens on that tile.  The game has 100 tiles in it – 5 colors, each with 20 tiles.  If you are not playing with 5 players, you must randomly remove some tiles from the game, making sure to not remove any tiles of the active player colors.  The tiles in the game are placed in a cloth bag, shuffled and then given to the start player.

The game will be played over a number of rounds – until the bag is empty of tiles.  The start player for each round is the player who has the bag.  That player draws out a number of tiles equal to the number of players in the game.  Then, starting with the start player and going clockwise, each player chooses an unchosen tile and adds it to their tableau.  In general, you want to place tiles adjacent to tiles of the same color – more on why when we explain scoring later.

When you draw your tile, you also have the option to pass on placement – if you choose to do this, you discard the tile into the box and then place one of your elephant markers on its side.  It will remain on its side for the rest of the game but it still moves around as normal.  As you only have two elephant tokens, you can only pass twice in the entire game. 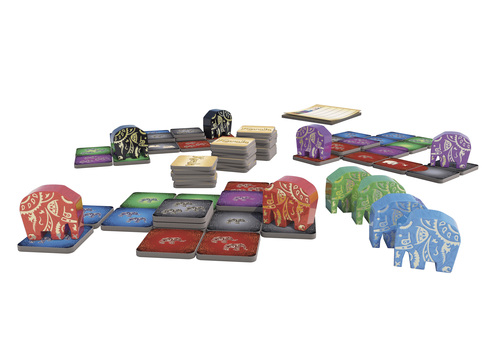 There are four basic types of tiles

Elephant tiles – these tiles have 1, 2 or 3 elephants on them.  These are used to score points at the end

Move Elephant tile – when you move your elephant figure onto this newly placed tile, you can immediately move either of your elephants to any tile in your tableau.  (The action does not trigger again if you move an elephant onto this tile later in the game)

When all the tiles in the bag have been placed, you now score your tile tableaus.  The first thing that you do is look at your elephants.  For each elephant that you still have upright (i.e. you did not use it to pass on a tile placement), you score 1 VP.

Then, look at your tiles and choose one contiguous area of each color to remain on the table.  (If you have a stack of tiles, the entire stack counts as the color of the tile on top…) If you have multiple areas in the same color, you can choose which one you want to keep – it does not necessarily have to be the largest one.  All tiles not chosen to remain are removed from the play area and placed in the box.  Count how many tiles you remove as you take a -2 VP penalty for each tile removed.

Now, look to see if you have any of the multi-colored half-moon tiles left.  For each half-moon portion that matches up to a tile of matching color, score +5 VP per match.

Check to see if you have all 5 colors left on the table.  If not, you take a -5VP penalty.

Finally, count up the elephant symbols on the visible tiles (i.e. only the top most tile in a stack).  You score 1 VP per elephant icon.

The player with the most points wins the game.  There is no tiebreaker.

Regular readers of this blog will know that I do love me tile laying games and dice games – and so, naturally, I was intrigued to give this one a try. Unlike many of my favorite games, the tile laying restrictions here are not based on what is found on the tile but rather based position wise on where your elephant tokens are located.

The draft mechanism adds another small layer of complexity to the process.  It gives you a chance to make some defensive plays as you can deny tiles to later players based on your choice (or perhaps force them to take a tile that they don’t want at that time).  It all evens out in the end as each player will have an equal number of turns in each drafting position over the course of the game.  The drafting does add a little bit more direct interaction with your opponents which is often missing in sandbox tile-laying games.

Flexibility is definitely granted through the special action tiles – the move elephant tile and the move tile tile – but these do come at some cost… you get a fairly powerful action from the tile, but those tiles will likely not score you any points at the end of the game.

In my first few games, I either forgot or ignored the option to stack tiles – and having more experience with the game, I have learned that stacking tiles can be a powerful move.  This can help you join colored areas together or prevent you from creating a second area of a particular color.  It can also be a strategic move to help you move your elephants around the board.  Be careful if you overlay a tile in the center area of your tableau – as the only way that you’ll be able to move that elephant out is to then overlay another tile!

While the ability to overlay a tile is nice, it also limits your overall scoring potential as you lose one possible face-up tile in your scoring area each time you overlay a tile.  And, once you make a stack, it becomes vitally important to have that stack be in an area that you keep at the end because otherwise you take a -2VP penalty for every tile in that stack.

Elephant management is a subtle thing but very important to your overall success.  Keeping your elephants in areas where you can make use of the highest proportion of tiles is vital – especially when you are drafting last in a round.  Keeping track of which tiles are left in the bag may also help you figure out where to best place your elephants.

The game definitely plays quickly with most of my games coming in around the advertised time of 30 minutes.  Oftentimes, my tile choice is obvious from the remaining choices, and as a result, many of the turns take almost no time.  We have had to make a little house rule that once you pick up a tile, you can’t go back.  We had a few instances where someone would consider a tile, and then the next person would choose and try to place.  It’s a bit awkward when the previous player then tries to take away a tile once he sees what the next player was going to do with it…

The game rules and the art are definitely abstract, but this is one which still looks good on the table due to the vibrant color of the tiles.  It also will likely double as a nice travel game as you can store everything in the cloth bag when you’re on the go.