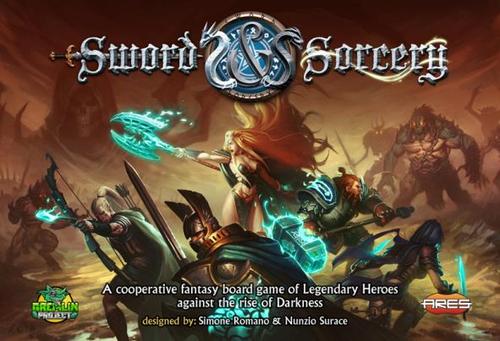 Sword and Sorcery has been on people’s radar since summer 2015.  Not my radar, mind you – but there have been people talking about it since it was first mentioned on Facebook and then on Kickstarter.  Advertised as an improved version of Galaxy Defenders – the game quickly passed all of its funding goals, and the game has just recently come to the market.

So, I know you’re thinking (heck, I was even thinking) – Why would I try this one out?  A cooperative fantasy/miniature game is pretty far away from my comfort zone… Sure, but this one was described as a fast paced dungeon crawl, one that feels like a meld of RPG/MMORPGs with an innovative AI system to control the enemies.  It had been a long time since I had really sit down to play a new solo game, and this one found me at the right time.  Descent had been a surprise hit for me when I was introduced to it many years ago, but that really needed a dedicated group and a good Overlord to be fun.  S&S promised a great solo experience as well as a game that could be played in chunks of time shorter than 4-6 hours.  My intent was to try in out myself in a solo environment, and once I became familiar with it, I might then be able to get it to the table with my whole group (though admittedly, this is not one that my usual group would go for).

The backstory to the game:  Your group of heroes were once legendary characters.  However, you’ve all been killed at some point.  Powerful spells have brought you back to life, though you’re still not quite yourself after the resurrection.  You are sent on quests to fight off evil, and as you gain experience in those quests, you will regain strength, skills and unique abilities as your soul regenerates.  Heroes all start at Soulrank 1, but can grow in power all the way up to Soulrank 7. 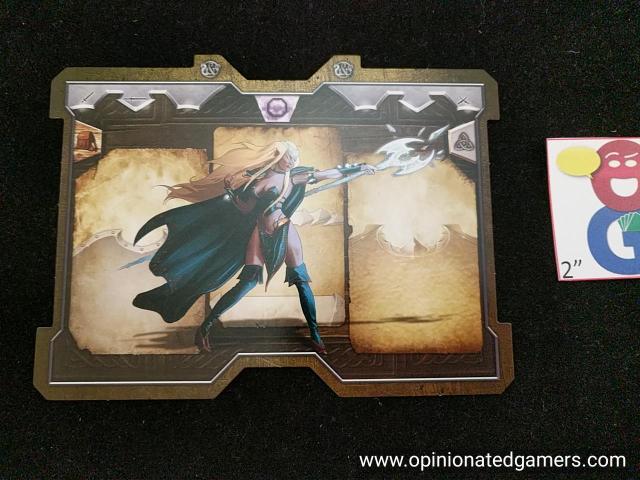 Before I got started, I had to invest about 3 hours of time into reading through the rules.  There are three different rulebooks – a main rulebook, a Storybook which has all the setup for the different quests, and the Book of Secrets which has all the dialog and events from your quests.  To get started, I really only needed the main rulebook – but at 56 pages – this took quite a bit of time to get thru and digest.  The box is huge, chock full of bits.  There are about 20 double sided map tiles, the rulebooks, hero/enemy figurines, a dozen or so decks of cards, and hundreds of chits denoting modifiers of all sorts.  A fair amount of time was also set aside to unpack, punch and gaze at all the bits. 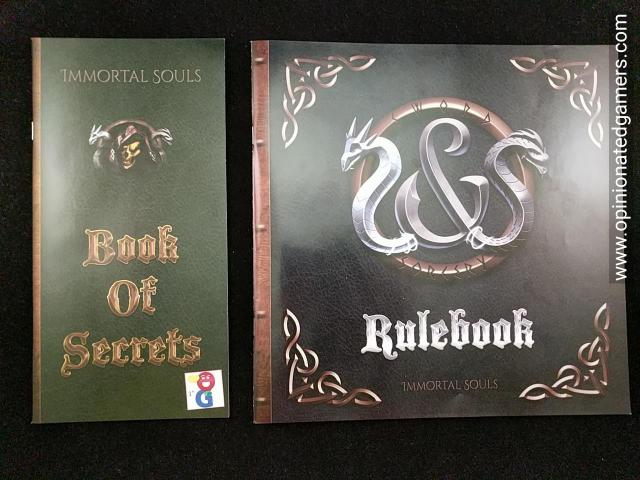 To get started, you have to pick a party of adventurers.  You need at least 2 heroes, but I have somewhat arbitrarily chosen three heroes for each game so far.  There are five different heroes to choose from, and they each have two different version – so maybe it’s better to say you have ten different heroes to choose from. You are somewhat limited in that you must choose players with compatible alignments – there are 3 Gods (lawful/neutral/chaos), and all you cannot have lawful and chaotic heroes in the same group.

They are set up separately with their own inventories, player board, hands of cards, etc – though one player can control all of them.  Each player starts with one or more Innate powers on their Hero card.  Later in the game, they can also get other powers from cards.  Many of these powers have differing abilities based on the Soulrank of your Hero.   These power cards will be flipped over when used, and there is a delay of 1-4 turns before you can flip the card over and re-use the card.

Then, you pick your quest from the Storybook and set up the scenario as directed there.  The overall objective / end point of the quest will also be outlined in the Storybook entry for the quest.

The game is played in successive rounds until the Heroes either win or lose.  The format of

In the Battle phase, each Hero plays a set of two turns.  First, the Hero gets to move/fight and take actions.  When you fight, you choose your weapon and then roll the dice noted on that weapon card, then you look at the results and use dice to add modifiers to determine your total number of hits.  Then, looking at the enemy, you subtract hits for defense, resistances, armor, the defensive dice rolls and other modifiers.  Then, that Hero must take an Enemy turn where an Encounter card is drawn and is resolved.  The Heroes all must take a set of turns in this phase before moving to the Event Phase.  In general, every other turn, an Event card is revealed from the deck and resolved.  Events can further the story – they will direct you to read passages from the Storybook.  Events can also be one-time things. 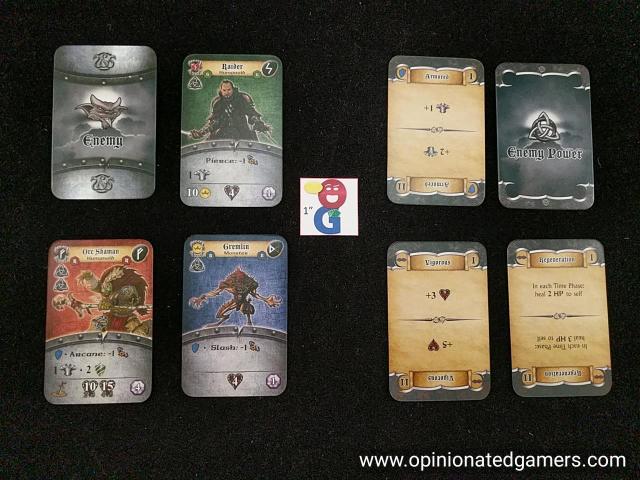 The Heroes win the game if they meet the winning criteria as outlined in the Storybook.  They lose if all the Heroes are killed (again) or if the Event deck is empty – i.e. the Heroes didn’t succeed soon enough.

Sword and Sorcery has been a nice change of pace for me.  As I mentioned at the top, this is not my usual sort of game nor do I usually play big solo campaigns.  That being said, it has been an enjoyable activity for a weekend where I was home by myself.  The game was set up on one half of the pool table, and it’s still set up now as I might go back for more soon.

There was a fairly long setup time for the first quest.  Between punching the bits, organizing the figures, and reading the rules, it took most of my first night with the game just to feel ready to play.  The rules are quite complex and it took about two scenarios worth of play for me to feel really comfortable with all of the little rules to keep track of – this seems to be standard for the RPG genre – but I found myself having to constantly calculate modifiers, adding and subtracting modifiers for shields, weapon bonuses, being poisoned or being on fire, etc.  One thing that I found easier was Line of Sight. For me, this game’s take on LOS is simple – each room has a single LOS “X” mark, and if you can draw a line between the two X’s, then the rooms have line of sight to each other – though there is a limit of 5 areas.

The story is pretty good, and it appears that there is a bit of divergence in the storyline based on the alignment choice of your party.  I’m not sure what this means for the replayability – as in, would people go back and play all the scenarios again with an oppositely aligned party…  The Quests have been interesting to play through and see how the story develops.

My sessions have been on the longer side, maybe 3 hours or just more.  Setup for a scenario can take awhile – and this hasn’t improved with experience.  It takes me a fair bit of time to make the map, and then I have to pull out all the enemy figures and cards, and then setting up the story deck as well.  I think that this is a good thing in that it makes all of the scenarios feel different and well put together, but it’s at the cost of time.

I’m sure that some of the longer play time is also due to my initial unfamiliarity with the rules.  However, with succeeding scenarios, I think that I started to understand the game system better, and as a result, I had a lot more to think about as I made decisions through the game.  The starting setup decisions are important – which heroes to take and which alignment to choose for them.  Also, you get some choice on initial powers and equipment which can affect your success.  Sure, you’ll change a lot of the equipment along the way, but it’s better to start with stuff that helps you.  On each turn, you have to look at the board and figure out which order you want your Heroes to take their battle turns, etc.  Also with the different powers, given the recycling time delay, you have to carefully choose when you want to use the powers of your HeroesFinally, as you would expect, as you move through the Storybook, the scenarios appear to get more difficult, and it takes more time to figure out how you’re going to deal with the problems presented by the many enemies.

I’m not done with my experimentation with the game – it’s still set up on the pool table in the basement.  But, I’m trying to get something written up prior to GenCon as this where a lot of you readers might come across the game next…  It’s been fun for me, and it certainly kept me busy for a whole solo weekend.  Sure, this still isn’t my favorite sort of game, and I’m not going to devote all of my waking time to playing it, but for a non-fantasy gamer, non-RPGer, this one kept my interest much longer than I thought it would (as evidenced by the fact that I’ve haven’t packed it back up yet!).  There are a LOT of rules to go thru and remember, but it’s become fairly manageable as I have continued playing the game.  If you’re at all interested in dungeon crawls, I think it’s worth a look.  And, if you’re like me, and you’re not normally interested in dungeon crawls, I think it’s still worth a try.  I’ve enjoyed it so far. 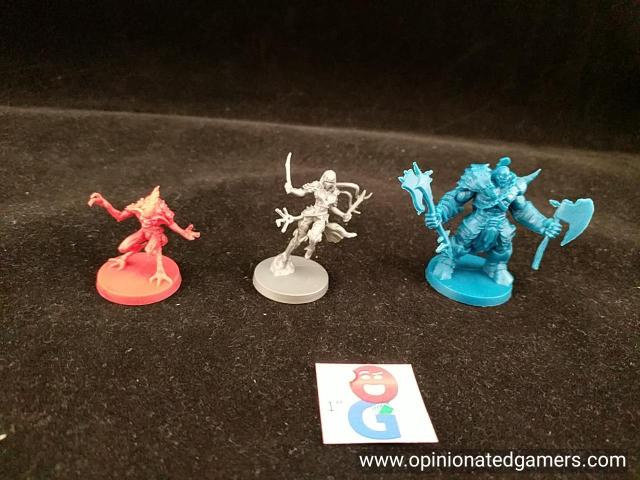 1 Response to Dale Yu: First Impressions of Sword and Sorcery