I’ve played these once each (with purchased copies), so here are some preliminary thoughts.  Due to, things, I’m posting posts backwards, and these will be on an  Essen 2017 anticipation list next week. 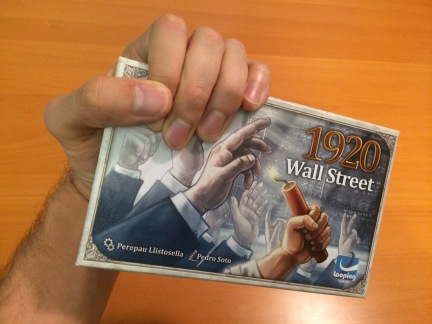 1920 Wall Street is theoretically a stock market game, and victory points at the end of the game will be determined (mostly) by money (current value of stock portfolio + cash on hand), but you’ll also earn victory points for making certain market adjustments. 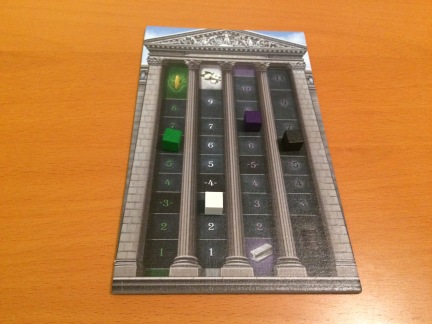 It has a Rapa Nui-style mystery stack that you build during the game that will affect how things are scored.  Here, you’re creating three discard piles; at the end of the game, depending on the amount of dynamite symbols on cards in those stacks, you may enact one of the following: (a) “wild” stocks are worth a static $3 (b) everyone has one less of each stock (you can only score a stock if you have a certain amount) or (c) all stock values are halved. 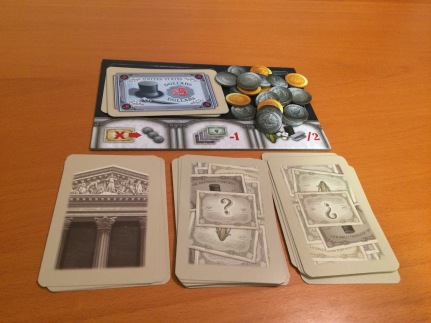 One aspect that made me nervous from reading the rules is the way the game handles money/income.  Each player has a certain “capital” level; it functions as income, but for which you don’t get change if you don’t spend it.  You just have, say, $5 to spend each turn.  You also start with some cash.  What do you spend money on? The game uses a card rondel where you’ll be travelling clockwise (and counter-clockwise) and generally buying a card which will then be replaced with the top one from a deck (which was face up).  For each space you want to move, that’s $1.  Another player on the space you want to land on? That’s $1.  The card itself will also have a cost, $1 to $4.  Some of that (movement, card costs), you can pay with capital.  Other players though?  Have to use cash.  Want to switch the direction of travel?  Have to use cash ($1).  Want to increase your capital?  Have to use cash. Want a card that is further away and costs more than you have in capital?  You can use cash. 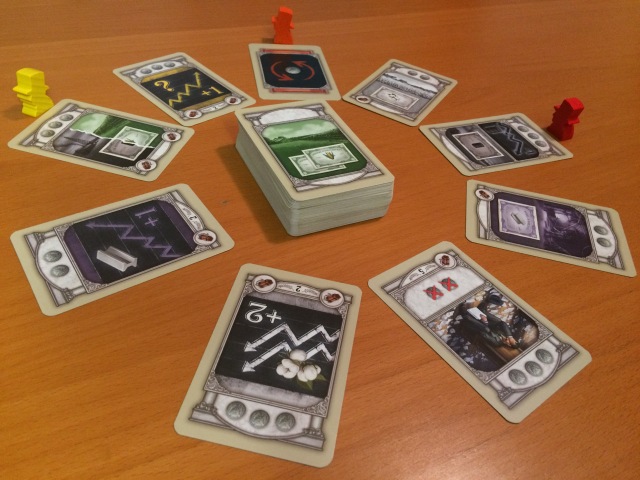 There are loans ($5 for -$8 later, no paybacks), but the money was extraordinarily tight – no…not the money, the cash. Capital was loose.  If you wanted a low value stock that was just hanging out next to you, you could always afford that – but getting that juicy card a few steps away?  Maybe maybe not.  I really liked this odd feeling of being able to afford everything and nothing.  Quite clever. 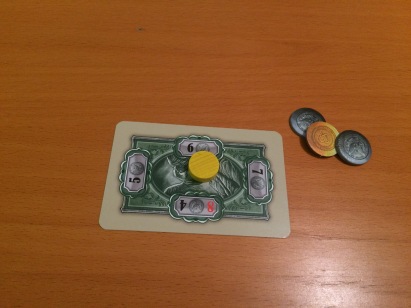 How to get cash? When you pay to switch the direction of play, that dollar goes on a card in the rondel.  You can go there and freely grab the cash.  (In my one game, it never made it above $1 before someone grabbed it.)  You also get the $1 if someone goes to your space.

The other way to get cash is selling a stock.  For half value.  Yeah…you can sell a stock if you want, but, let’s, uh, we’ll call it the broker’s commission….your broker charges a 50% commission on selling stock.

We started out playing this with straight-forward strategies of building up a portfolio of the better stocks and raising their prices, but I think there’s more to this game than that and it didn’t reveal itself for me until later.

Specifically, I think we failed to utilize the discard/card-market-control mechanics that the game provided—  If you pick up the cash from the direction card; if you sell a stock; if you move to a card and just want to discard it; if you raise your capital…each of these causes a card to go to one of the end-game discard piles, your choice.  Sometimes that card is from the (visible) top of the deck, and sometimes it is the card you’re at in the rondel. In retrospect, I think that we, or at least I, under-used this ability to remove cards that I didn’t want to affect my stocks’ prices (or want other players to acquire) from entering or remaining in the market.

You could also go for cash.  As the game requires a minimum holding for each stock in order to count any of that stock, and one of the end game penalties causes stock to be worth half value, there may be something to dynamiting that penalty, and fire sale-ing those stocks where you’re under the cut off.

You could also go for some sort of #wildcard strategy and only go for/focus on a volatile market strategy (as each fluctuation card is worth VP).  Maybe?

I was nervous after my first two turns that this was going to be a tensionless set collector, but it soon showed itself to be not that, and I look forward to playing again. 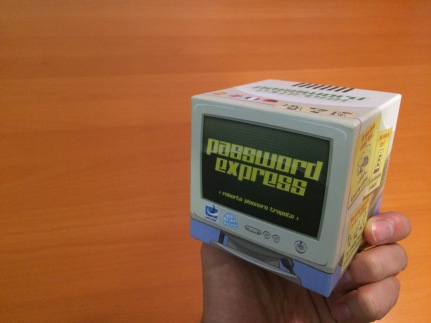 Password Express is basically this: guess a word that describes something blue, but has a J as the second letter.  But there are four categories at once.  Each with a different letter.  And you’re looking for words that have the specified letter in the first, second, and third position – and then either after the third or not at all. 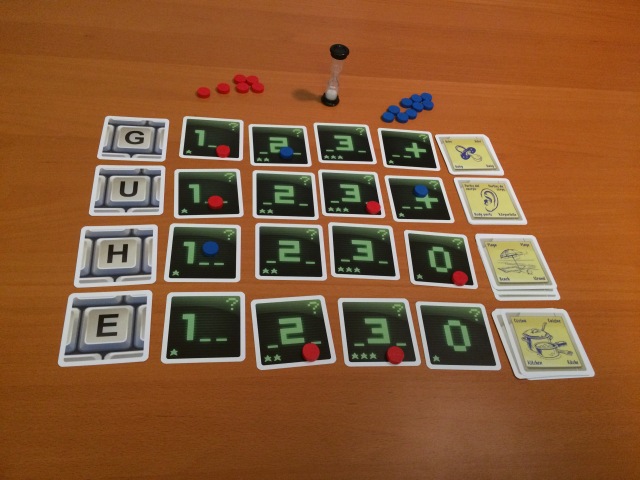 More specifically, your team has 15 seconds.  Then its my team’s turn.  When you come up with a bird that starts with an N (nuthatch), you put your colored disc on the “1” space and score (surprise) 1 point.  If you can come up with andean condor, put a disc on the “2” (andean) and the “3” (condor), for 5 points.

But your 15 seconds was probably up by then.  Teams alternate until all password combinations are guessed, or neither team adds a word in consecutive turns.  Flip categories, and do 3 more rounds.

There’s no time for mis-direction during the other team’s turn, as that’s your only time to think of new words.

This should be good for family gatherings in the coming months.  I’ve always enjoyed Word on the Street and this sort of crossword puzzle thinking of clues – I’m looking for a type of flower with an H as the second letter.

The third rail, to me, for this type of game is vague boundaries of the categories and spelling enforcement.  For the latter, here it’s not bad, as you only need to get one letter correct.  For the former, we went through as categories were revealed, and clarified any obviously vague boundaries (e.g. OK, it says “food”, so it should be something edible, not like a kitchen utensil), and that seemed to work fine.

The timer enforces lightning turns that keep things from dragging and gives you much needed time for thinking while the other team can’t come up with a vegetable that has K as the third letter.