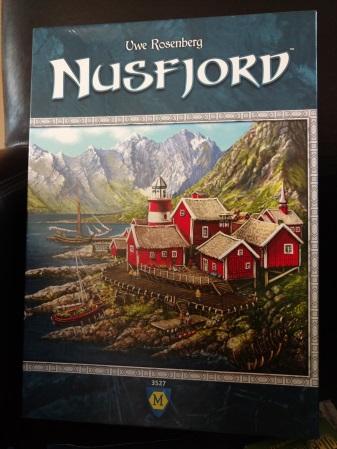 Nusfjord was one of the games I was most looking forward to from Essen. I am generally a fan of Mr. Rosenberg’s games, and A Feast for Odin is one of my most frequently-played games of the last year, so on the first day of Spiel I headed straight to the Lookout/Mayfair booth. Spoiler alert – I was not disappointed.

In Nusfjord you are a fisherman trying to expand your harbor and the surrounding area; you do this by expanding your fleet, constructing buildings and asking the village elders for assistance.

There are 4 common boards in the center of the table that are shared by all players. 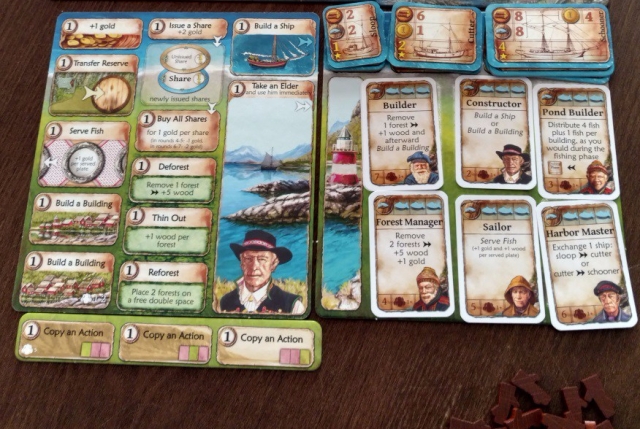 Each player has a personal harbor board with space for elders, buildings, boats and fish as well as a personal supply board, 3 player tokens and 5 shares in their fishing company. 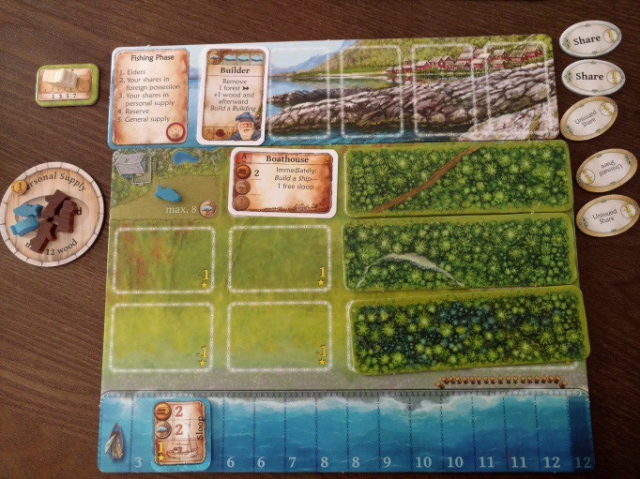 The start played is determined randomly; the start player takes the tile with a 1 on it and distributes the other tiles as indicated on the 1 tile; these tiles will trigger the addition of new building at the appropriate points during the game.

The game takes place over 7 rounds. Each round is broken into 3 phases. The first phase is the fishing phase. Players determine how many fish they catch based on their boats on the bottom of their player board; the more/larger ships you have, the more fish you catch.  Fish get distributed to any elders you may have, then to any shares of your fishing company no longer in your possession, then to your shares still in your possession. If you still have remaining fish they go into the reserve space on your board.

Options for actions include

The next phase is the returning home phase, during which players remove their workers from the action board and their elders and the start player marker moves counter-clockwise to the next highest round tile and any directions on that tile are carried out.

I really enjoy this game. While it certainly contains some elements from other games by the same designer, there is enough that is new here that makes it feel different to me. The actions seem streamlined; you can build a reasonable engine for your goals with buildings and elders fairly quickly. There are not an overwhelming number of choices, and the choices you have are interesting. If another player takes something you wanted, you may have the chance to copy that action or you can find something else that is still useful to you. It is easy to see what the choices are, and you aren’t trying to decide between a huge menu of options, so play moves relatively quickly.

The mechanism by which the elders work is interesting to me; you can only take one if there are available fish on the banquet table, and eventually one player must sacrifice fish from their personal supply in order to refill the table. While that player is rewarded with gold, which is not that easy to come by, they are sacrificing resources that will help them build buildings and ships.

The share mechanism is also pretty cool. You give up your own shares to get immediate cash, but then have to pay a fish every round to the player who ends up buying your share. You at some point also have to invest in buying other players’ shares, too, to add to your fish income but also to prevent another player from having too many, since they can get piles of fish and more victory points at the end of the game.

There is not much I didn’t like about this game. There are few component pieces that aren’t perfect. The number one coins are problematically small and hard to pick up; I assume they were made this way to ensure they fit on your personal supply, but your money doesn’t really have to go on there and I’ll be looking for something to use as a substitute. 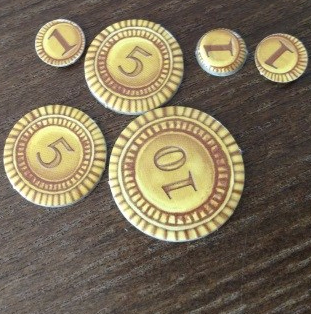 Some of the graphics on the building costs are a little hard to read from a distance. Also, the game tells you to use the herring deck for your first game, but doesn’t tell you in the rules (turns out it is in the Appendix) which deck that is; despite the fact that I live in a fishing village I couldn’t tell you what a herring looks like.  (It’s the deck with number 100 – 150).

This game is unlikely to displace A Feast for Odin as my favorite Uwe Rosenberg game. However, I prefer A Feast for Odin with 2 or 3 players, and it can be more of a time commitment than some want to make with 3 or 4. I think Nusfjord will be a perfect solution to that; it’s got some similar feel to other Rosenberg games, but it is streamlined and shorter even with more players and will likely see much more play for that reason.

Alan H: the game has plenty of variety, the presentation is generally good and the gameplay is clean. Turns are fast and the interaction is suitable for a game of this complexity. I’ve played three times and liked each time. So far I’ve found it works well with 4 and 5 players.

Craig M: Only one play so far (5 players). I found it more appealing than Glass Road which felt chaotic to me. It feels like it will have enough variety to keep it fresh as well as working well for different player counts.

Joe Huber (2 plays):  I’ve not had nearly as much luck with Rosenberg’s board games as I have with his card games, so I wasn’t really looking forward to Nusfjord; it wasn’t even prominent on my to-play list.  But I heard enough positive things – in addition to a number of negatives – that I decided to give it a try.  And – I’m very glad I did.  In a year with few Essen games that really hit home with me, this has been an exception.  It’s comparable in complexity to Glass Road, while using very different mechanisms, and successfully navigates my personal concern with worker placement games wherein lack of choice makes for more frustration than tension.  While I can’t be sure after just two plays, I do think this will be one of the very few games from this Essen to stick in my collection.

Greg Schloesser (1 play):  I must admit that I had grown weary of Rosenberg’s rehashing of his now very familiar mechanisms.  He seemed to be fixated on the same types of themes and mechanisms, and last year’s A Feast for Odin was simply WAY too much.  Nusfjord, however, was a pleasant surprise, being more streamlined and far less cluttered.  I thoroughly enjoyed my one play and look forward to more visits.

James Nathan (1 play): I liked Arle and Odin, but if there’s something I didn’t like, it’s that I thought the action board was too open and forgiving. I feel the same way about Caverna. I love the tightness of the Agricola action boards where getting or not getting the space you need is more punishing, and while Nusfjord isn’t as tense as Agricola, it is a swing back in that direction, and that’s a good thing for me. I also think the elder potluck is a neat mechanic with the ebb and flow of being able to use the elders, and incentives and disincentives for refilling the board.  I don’t quite love it, and if I didn’t own it, am not sure I would purchase, but having already purchased it, I don’t anticipate selling it.

Patrick Korner (1 play): I am a huge Odin fan, and have generally liked most of the Rosenberg designs put in front of me. Nusfjord is not a bad game, but compared to something like Odin it felt like using only half the crayons in the box. The game works, and is pleasant enough to play, but did not strike me as memorable or tense. I agree with the comment above that the action board is too forgiving, which probably swings Nusfjord more to the ‘family’ end of the spectrum. I also found in my game that killer combos exist, which, once enabled (in our case by the second round), left the game’s outcome a foregone conclusion. Overall, my take would be ‘inoffensive’. I will play if another had their heart set on it, but am unlikely to advocate for it myself.

Dan Blum (2 plays): I tend to like Rosenberg’s bigger board games more in theory than in practice; the only one I’ve enjoyed enough to have played more than a few times is Glass Road, although I like Odin well enough that I’d be willing to play again. I like Nusfjord more than most; while not quite as short as Glass Road it’s still a good length and it’s significantly less chaotic. The use of the three different decks and the random selection from the particular deck used ensure that each game will have a somewhat different feel while still allowing for a fair amount of planning.

Dale Yu (3 plays – 1p, 2p, 5p) – After three games, I very much like this one.  I really like the fact that this is a more simplified Rosenberg worker placement game – making this more appropriate for lighter gaming sessions or teaching newbies.  Additionally, I LOVE the shorter game time.  I still have plenty of tough decisions to make, but in an hour or less!   While there is certainly a time and a place for Agricola, some days call for shorter games.  The variety in the three different decks is also nice to make sure that the game doesn’t feel stale.  Like Tery, I do wish that the components were a bit better.  The small coins are a serious pain to try to pick up, and I can barely read the costs on the sides of the building cards even when I’m sitting right next to them, but those things haven’t taken away from my enjoyment of the game.   The other huge plus of this game so far is that it has scaled quite well for the three different player counts that I’ve played with so far. This game will definitely not replace Agricola as my favorite Uwe worker placement game, but it’s a strong second.