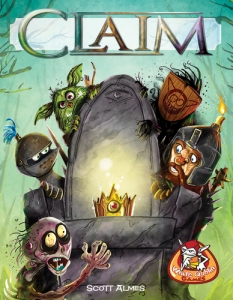 Shortly after discovering German-style games, I was introduced to the “trick-taking” game genre.  I did not grow-up in a card-playing family, so I had little exposure to traditional card games.  Thus, the trick-taking concept was new to me, and frankly, I didn’t understand it. The rule that required one to follow the lead card seemed restrictive, removing the ability to choose which cards to play.  As I gained more experience with the genre, I learned more nuances and began to understand and appreciate the trick-taking mechanism.

A recent development in the genre is the introduction of 2-player designs, a concept which initially perplexed me.  All of the trick-taking games that I have played up to this point were for multiple players, and I feared that the dynamic when playing with numerous players would be lost when only playing with two.

The first (and so far only) game in this relatively new 2-player genre that I have played is Claim by designer Scott Almes and published by White Goblin Games.  The game has a familiar fantasy setting wherein the king has died, and now five different races are vying for control of the realm.  The deck of 52 cards features goblins, dwarves, undead, doppelgangers and knights, with most groups having values from 0 – 9 (the knights range from 2 – 9).  The cartoon-like illustrations and card colors make it easy to determine the race of each card. 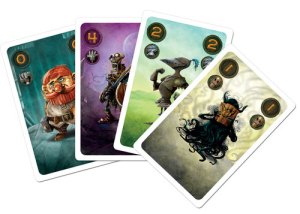 The game is played in two distinct phases.  During the first phase, players compete to acquire cards, which will then be used in the second phase in a head-to-head battle in an effort to gain the most cards in as many factions as possible.  Each player is dealt a hand of 13 cards and the competition begins.

Each of the 13 rounds of the first phase is played in the same fashion:  the top card of the remaining deck is revealed—this is the card the winner of the trick will take– and the lead player plays a card the table.  Standard trick-taking rules apply in that one must follow the lead suit if possible, with the exception of a doppelganger, which is considered a “wild” card and can be played even if the player has a card of the lead suit. High card in the lead suit wins the card that was revealed from the deck, placing it into his separate “followers” deck.  The loser of the trick takes the top card from the deck.  If any undead cards were played to the trick, the winner of the trick takes those and places them in a separate score pile.

The goal of the game is to capture—primarily during Phase 2—the most cards in a majority of the factions, so ultimately having the majority in three factions is enough for victory.  Most of these cards will be captured in Phase 2, but undead cards played in the first round go directly to the winner’s score pile.  Since the loser of the trick takes the top card from the deck, this may sometimes be preferable to taking the revealed card, particularly when it is of a low value.  So, sometimes you want to win a trick—usually when the revealed card has a high value—while other times you would prefer to lose the trick so you can hopefully draw a higher valued card from the deck.  This results in some interesting decisions.

In the second phase of the game, players take the 13 cards they won in the first phase and use them to do battle with their opponent.  Just like the first round, common trick-taking rules are followed.  The winning player takes both cards, adding them to their scoring pile.  The game ends when all 13 tricks are played, after which players determine who has the majority of cards (not values) in each of the five factions.  Ties within a faction are broken in favor of the player possessing the highest valued card within that faction.  As mentioned, a player possessing a majority in three or more factions emerges victorious.

Four of the five factions have special abilities, which factor into the decisions to be made during the game.

Knights:  If played following a goblin (which can only be done if the player has no goblin cards), the knight automatically wins the trick. 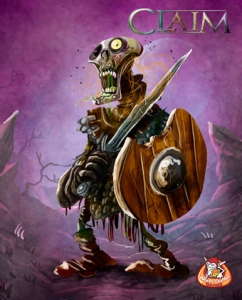 Undead:  During Phase 1, any undead cards played in a trick are taken by the winner and immediately added to his score pile.

Dwarves:  During Phase 2, the loser of a trick captures all dwarves played and adds them to his score pile.  This makes capturing high-valued dwarves during Phase 1 potentially less valuable as they could easily be lost if the opponent plays a low-valued dwarf.

Only the goblins do not have any special abilities, but there are more goblins than any other faction.

These special powers force players to make some interesting and often difficult decisions, particularly when a player has no cards of the faction matching the lead card.

I have been pleasantly surprised by Claim.  I admit that I was dubious as to how enjoyable a 2-player trick taking game would be.  I must say that Claim is quite enjoyable, even though I’m not sure there is a large degree of control.  While there are only five factions, the abilities, as well as the Phase being played, all force players to consider the ramifications of just about every card played.  This can actually be a bit too much to consider, as much remains beyond a player’s control.  If I have a complaint to level against the game, it seems that while there is a lot to consider and ponder, in the end it seems that there really isn’t much a player can control.

That being said, I still enjoy the game, as have each of the folks with whom I have played.  The game has many of those moments that result in groans of despair or shouts of glee.  Further, it plays quickly, typically finishing in 20 – 30 minutes.  The rules are well written and the game is easy to understand and play.  It certainly makes for a good choice to play with one’s partner or friend, or when waiting for a spot to open in a multi-player game.

Greg Schloesser is the founder of the Westbank Gamers and co-founder of the East Tennessee Gamers. He is also a prolific reviewer of games and a regular contributor to numerous gaming publications and websites, including Counter, Knucklebones, Boardgame News, Boardgame Geek, Gamers Alliance and many others. Greg has been a gaming enthusiast his entire life, growing up in our hobby mainly on the war game side. His foray onto the internet exposed him to the wonderful world of German and European games and now nearly all of his gaming time is devoted to this area of our hobby. He travels to several gaming conventions each year and is the co-founder of Gulf Games, a regional gaming get-together held in the Southern USA. Greg was born in 1961 and lived his entire life in New Orleans before moving to East Tennessee in 2005. He is married and has one daughter (now married.)
View all posts by gschloesser →
This entry was posted in Reviews and tagged Claim, White Goblin Games. Bookmark the permalink.