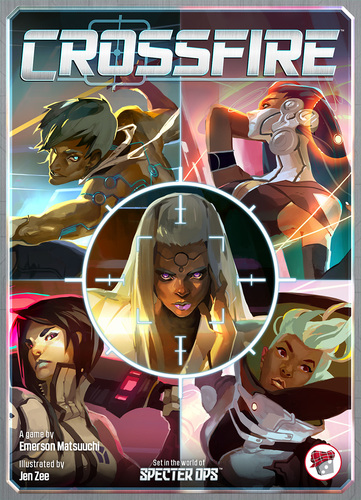 Crossfire is a social deduction game set in the world of Specter Ops.  In this latest creation by Emerson Matsuuchi (known for Century: Spice Road) and Plaid Hat Games, each player has a hidden role which defines their objective.  The roles in the game vary by the player count, and there are two ways to play.  In “Crossfire Mode,” there is a blue team, which has a VIP they need to protect, and the red team, which wins by shooting the VIP.  In “Sniper Mode,” one player is a sniper, and his or her goal is to shoot all of the Assassins in play, avoiding hitting the VIP.

Crossfire made its debut at Gen Con, and I enjoyed playing it when I was there.  I recently played it more at DeductiCon, a social deduction event I hosted in Kansas City.  Crossfire was a big success at the event, so I wanted to write a quick review.

Each player gets a  card.  The number of roles in the game is determined by player count, as shown on a chart in the rule book.

I’m going to do a walkthrough with eight players, as it has most of the major roles in play.  In an eight player game, there would be the following roles:

The only standard role that is not in the game at eight players is the Blue Decoy, who is on the blue team and wins if the VIP is not shot or if  he or she is shot by an Assassin.

After everybody has a card, they look at it and then pass it to the left.  That player then looks at the passed card.  Then the dealer shuffles her card and her neighbors cards together, and those players look at their new cards.  Then, every third player does the same.  (So in an eight player game, the dealer shuffles, so does the player three to her left, and the player six to her left.)  The card that players have at the end of this is their role.

The sand timer (which lasts about three minutes) is flipped, and players can begin discussing.  When time is out, all players simultaneously point their finger gun at one other player.

Players who did not have a gun put their fingers down.  Agents reveal their role, and if a player is shot by an agent, they put their gun down and reveal their role.  Then you evaluate whether the VIP is shot, and winners and losers are determined.

In Sniper Mode, one player is a Sniper who will attempt to shoot all of the Assassins in play.  One player is chosen as the Sniper, and then role cards are put into the game.  The roles in the game are the same as in Crossfire mode, although the makeup of the group once again varies by player count.  The sniper gets a number of sniper shot cards equal to the number of Assassins in play.

From there on out, gameplay is the same as in Crossfire, except the Sniper isn’t part of the card shuffling.  The Sniper must place a sniper shot card in front of each player he suspects to be an assassin before the timer runs out.

There are six other roles that can be incorporated into the game.

I love social deduction games, and Crossfire is a decent entry to the genre.  It reminded me a lot of One Night Ultimate Werewolf, in that it is fast paced and adds replayability via several different roles.

There is far more negotiation in Crossfire than in comparable social deduction games.  The negotiation arises because there’s not voting, but rather simultaneous shots fired, which means you need to make sure all guns are aimed at the right people.  So rather than setting one person up as a target, you’re often trying to identify several targets and coordinate the aiming of finger guns.  It’s tricky and devilishly fun.

The coolest twist here is that you get quite a bit of information during the card passing and shuffling.  You need to look at each card, remember what you got, and decide how to cleverly share that with the group given your role.  I haven’t found a clear way to play any given role: it all depends on the group dynamic.

I think Crossfire works better at higher player counts.  The five player game is still fun, but I most enjoyed it with my group of 9 and 10.  I also like switching in a few of the other roles, particularly the Bomber role, which I’ve had a ton of fun with.

I’m not familiar with the theming and story arc behind Specter Ops, so I can’t comment on how well the theme is done.  But the artwork is clever, I appreciate the concise rule summaries on the cards, and I like how the back of the cards have a diagram which can be rotated to show your claimed role.

I prefer Crossfire Mode to Sniper Mode.  Sniper Mode is a cool twist, but it can be a bit wonky in the ending.  Plus, Sniper Mode puts a lot of pressure on one person, since discussion tends to be channeled at that person, and not all players enjoy that aspect.

My biggest criticism of Crossfire is that it is missing the elegance of One Night Ultimate Werewolf.  In particular, I missed the app, which would have automated the “script” part of this.