Twice a year, in March and November, a small gaming convention takes place on the English south coast. It is called the White Rock Boardgaming Weekend, primarily because it is held in the White Rock Hotel and runs from sometime on a Wednesday through to the following Sunday which makes it slightly longer than a “weekend”. I usually attend the March get togethers and 2018 was no exception, arriving early Thursday morning to join the already busy gaming room. Attendees bring along games with them that they are happy for others to play and there are usually some prototypes from game designers eager for playtesting and feedback.

After a hearty breakfast, I thought it was the perfect time to tackle a game that I had been wanting to try out for sometime: Kingdom Death Monster. A group of 4 of us, led by fellow Opinionated Gamer Alan How, took over characters from a previous session so started at level 2. This game drips theme with a high quality illustrated story book providing the background to the characters and their adventures. The card  based combat is clever and when damage occurs during combat then the hit location is taken into account. This makes the dungeon crawl fairly slow paced and we spent the whole morning with a single encounter. However, there was plenty of action taking place at character level but eventually the dice rolling failed us and the entire party was wiped out. 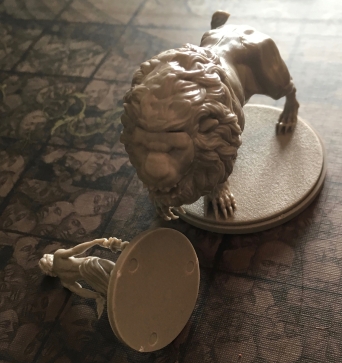 My overall impression is that the game has great depth to the story arc and if you have a lot of time to play through the adventures then you will get a lot of satisfaction from the game. Personally, I am glad that I had the opportunity to see how the game played, but I think I would choose Descent for its speed and a Dungeons & Dragons session for story depth.

Next up was The Mind, the latest game from Wolfgang Warsch to arrive from Germany. With a deck of 100 cards, numbered 1 to 100, upto four players try to get rid of their hands of cards by playing the cards in sequence between all the players. Without talking each player has to decide when to play a card from their hand just by looking at the last card played and trying to determine if another player has a card left in their hand of less value than the lowest in their own hand. There are limited ways to stop play and reset the card flow but mostly you stare the other players in the eyes to decide when to play your next card. The game is great fun for a short filler and the right group of players.

Alban Viard’s Tramways was also new to me and provided a different twist on the route building pick up and deliver games. The unique part of this game is the very brutal auction mechanic where you pay for your bid at the time you make it and if you get overbid and have to make a second (or third) bid then that costs you again! With some negative cards which you need to avoid in the auction you start to see just how nasty the game can become. It is interesting to play and has enough differences to warrant table time provided you have the crowd that can accept what may appear unfair choices.

After teaching one of my favourite games from last year’s Essen: Heaven & Ale, and relaxing through a old favourite of Notre Dame, I played Tournament at Camelot from Wizkids and a whole host of designers. This is a trick taking card game where you are trying to avoid taking negative points in order to survive longer than the other players. Thrown into the mix are twist cards: sorcery, deception, alchemy etc. which are sometimes played to help your own score but mostly to make things really bad for your opponents. This is a real “take that” game where you need to be able to take it as well as dish out the damage and in that vein it is a fun filler which runs in about 35 minutes.

Friday started with designer Nick Case leading us through an advanced prototype of his latest game: The Sagas of Noggin the Nog. The stunning artwork from Peter Firmin coupled with the beautifully produced pieces brought the children’s books and TV series to life. But don’t be fooled because this is not a children’s game, instead it is a reasonably heavy worker placement style game.

A rondel style player order track gives the progression of actions a unique feel and allows you to carry out more “expensive” actions at the cost of waiting longer for your next turn. The is a timer track which will mean that the players will collectively lose the game if they do not complete a series of “sagas” before it expires. As it is unlikely that these “sagas” can be completed by a single player, there is a semi-cooperative element to the game where players vie for getting the best benefit from saga completion. Overall I was really impressed with this game and it is one that I will be backing when it hits Kickstarter later this year. 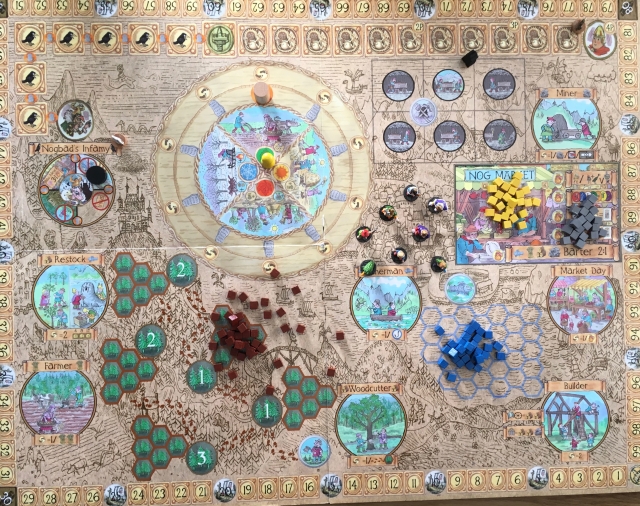 For various reasons and fear of a steep learning curve within my gaming group meant that I had never played Madeira from Nuno Sentiero and Paulo Soledade. So when friend offered to teach me the game I was excited to find out what I had been missing. Madeira offers a whole host of ways of getting victory points from simple resource collection through to area placement all set in a nautical island theme. Once you understand what each of the various routes to victory enable, then the game is straightforward and progresses swiftly. I am hoping that Madeira gets to my gaming group’s table in the near future.

The day ended with a run of games that I already knew: First Train to Nuremberg (where I achieved the lowest score of my life and finished the game with a single victory point!), Heckmeck, Can’t Stop (which proved you can win if you don’t stop rolling until you get to the top) and Abluxxen.

Saturday started with some more new to me games, the first of which was Nusfjord taught to me by another Opinionated Gamer Joe Huber, who had flown in from the USA just for the “weekend”. Nusfjord is Uwe Rosenberg’s release from last year’s Essen. It feels similar to his previous releases in that you have a player board which you need to cover with forests or buildings and you can buy cards that provide personal action spaces. This game is more streamlined with only three types of resources: money, fish and wood and only three actions per player per round. 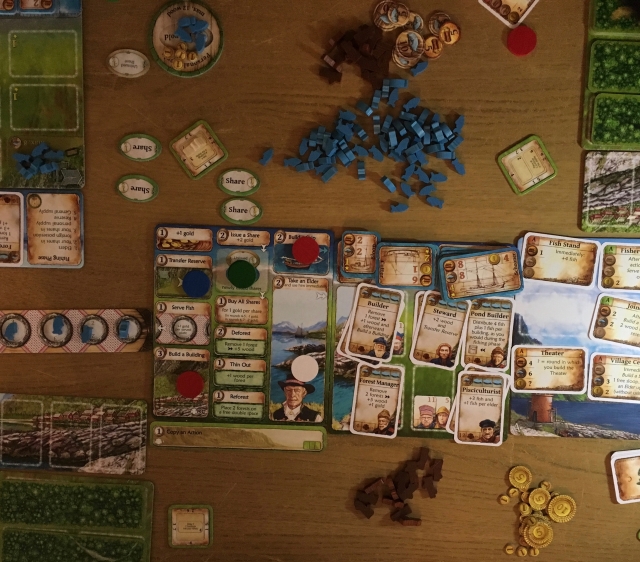 The game moves along quickly and a four player game can complete in around 75 minutes. There are a few production issues with the game namely the size of the single gold coins is tiny and fiddly, and the player resource boards are too small and prone to overflowing in the later stages of the game. That said, I enjoyed the game so much that I have already bought my own copy since returning home and I can see it replacing Caverna in my collection.

Joe Huber then went on to teach Little Town Builders from Studio GG. This is filler style game where you place workers to collect resources from adjoining spaces on the game board. You then use those resources to build structures in order to generate victory points and other resource benefits. The game plays in a short time of around 30 minutes but I didn’t find anything that sets it apart from other similar games.

During my stay at the convention, I got in two plays of one of the prettiest games from last year: Hjalmar Hach’s Photosynthesis. The theme of growing trees from seed is well embedded and the actions you can take make thematic sense which appeals to me. In this game you are planting seeds and then growing them into ever taller trees before cutting them down for victory points. The number of actions you get per turn depends upon which of your trees are not overshadowed by other trees on the game board as the sun moves round.

This abstract game works really well and is a bit of a brain burner. The downside is that if you don’t manage to get your trees positioned well to obtain sunlight then you will not get many action points and the opponents trees will grow faster and worsen their overshadowing effect. So once you are behind it is an unforgiving game and it is this that may reduce its appeal.

In amongst games that I had played before: Foppen, Welcome to the Dungeon, Ra, The Castles of Burgundy, 7 Wonders Duel and Roll though the Ages, I got to play Quartermaster General from designer Ian Brody. Having not played any of the Quartermaster series of games, I was keen to give this a try. This game as the title suggests is based in the World War I conflict in Europe with five players taking on leading the various nations involved. The simple card play mechanic works well and the various actions mesh seamlessly making this game an exciting, if at times intense, experience. I led Russia and at the end of the game which the allies won, I had 1 card left in my hand. I thoroughly enjoyed the game and I’ll be on the lookout to play there games in this series.

Sunday was a shorter day with games that I had played before: The Builders – Middle Ages (card game with action points to build victory point generating cards), Inhabit the Earth, Las Vegas and a second play of Photosynthesis.

When I returned home in the afternoon I felt that my need for gaming had been met with a nice split between games new to me and old favourites. The White Rock Hotel had been a pleasant venue overlooking the sea with friendly staff, a good restaurant and most importantly a supply of cask ale. I can recommend a brisk walk along the promenade before breakfast each day if only to prove just how cold England can be in March! 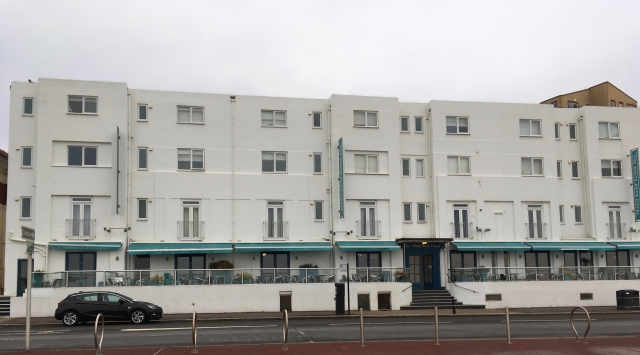 Simon Neale is a lifelong avid boardgamer and reviews boardgames for the Opinionated Gamers and Spirit Magazine as well as on websites such as boardgamegeek.com.
View all posts by ukgamersi →
This entry was posted in Reviews and tagged Kingdom Death Monster, Little Town Builders, Madeira, Nick Case, Nusfjord, Photosynthesis, The Mind, The Sagas of Noggin the Nog, Tournament at Camelot, Tramways, White Rock. Bookmark the permalink.