This is an amazing game that you should at least see in action, even if it is not your thing.

Start with a score of 0

If your score is >0, read on. The rest of the class is excused. 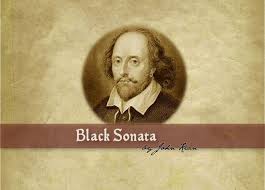 I am not a solo boardgamer. Sometimes I fiddle around to learn a game to be able to teach it. Sometimes I try to get a sense for how a game works by trying the app, but I never got sucked into playing Friday, Onirim, or other solo game in their dead tree incarnations. I do like deduction games, so I was up for trying Black Sonata (not Black Orchestra) and I am so glad I did.

The game is set in England at the time of Shakespeare. Your goal is to deduce who the Dark Lady is appears in Shakespeare’s sonnets. This means you must skulk around London, deducing where she might go next and trying to get there when she does. If you are able to see her, you get a clue. The clue helps you narrow down which three traits the Dark Lady has. Once you have narrowed it down to the three you think they (out of seven possible), you must catch up with her one more time and confront her. If you are correct about which three symbols are on her card, you win. If you are wrong about even one of the symbols or take too long, you lose.

This is an award-winning design that was/is Print and Play and is now available on Kickstarter. I am loathe to review KS games while the campaign is running, but I do think this is a special case, as you can print it all yourself for free or pay for someone else to do it.

Let’s start with a few basics, but without regurgitating the rules.

There is a map of London with 11 locations. The locations are connected to each other with lines. Along with the name of the location, such as Clerkenwell or Cornhill, each location has related icons associated with it, so Clerkenwell has a tree and a cross. Cornhill has a stack of coins. Some location, such as Blackfriars have three icons, e.g. house, masks, and boat.

Instead of talking through setup, just imagine a few piles of cards: location cards, fog cards, and clue cards. One of the genius ideas in the game is that the lady must be able to move to an adjacent location or stay in place. This means that the ‘stealth cards’ must be stacked so that she can move around the map and always be at most one space away from where she was last turn. The designer did this with alphabetical codes on the back of the stealth deck cards.

You then take the stealth deck (the deck of stealth cards) in hand and place the counter card at the bottom. You may cycle through the deck three times before she is lost forever. Oh, and if you run out of fog cards, discussed below, you lose as well. 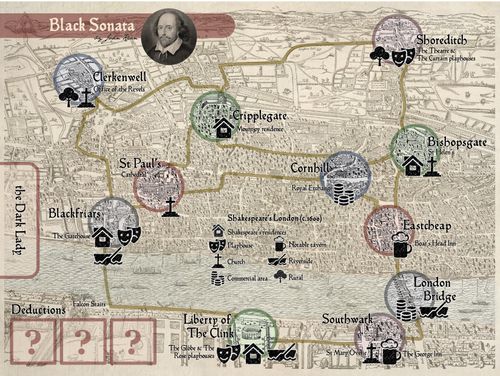 Houses are at Blackfriars, Cripplegate, Bishopsgate, and Liberty of the Clink.

Now comes the choice. Each turn, you have four options.
Pass and cycle another card to narrow things down (normally not a great idea unless you are happy where you are for some reason).
Move one space – so perhaps from Southwark, where she could not be, to Liberty of The Clink.

Search the location for the Dark Lady, the heart of the game.
Don’t search for the Dark Lady if you know she is not at that location (more on that later).
If you think she might be at your location, you search for her.
Place a fog card under the current top stealth card.
You then take the top stealth card that has the icon face up. You place it on top of the location card that has a hole in it (the location where you are and where you think she is. You then put the two cards together and flip the pair over. If you can see the Dark Lady through the keyhole, you have found her. If it is blank, you have not – and can use that information to your benefit.
Discard the stealth card you just used to search (you keep the location card in play), whether you found her or not (effectively, you just replaced that stealth card with a fog card, so that the sequence of the stealth deck is still correct.
If you found her, you flip a clue card and get information about which of the seven symbols your Dark Lady (one of eleven) has.
Here is the nasty bit, whether you found her or not, after searching, you must cycle cards from the stealth deck equal to the number of clue cards you have found, including the clue card you just got if you just had a successful search. So if you have three clue cards, you must cycle three stealth cards without looking at their icons. This means she could be anywhere! :(
If the top card of the stealth deck is a fog card, you take another fog card from fog card deck, tuck it under the top fog card and then flip the fog card, which could be good or bad. Remember if you run out of fog cards, you lose the game, so you cannot use them too often or search too often, as you have to use up a fog card every time you search. 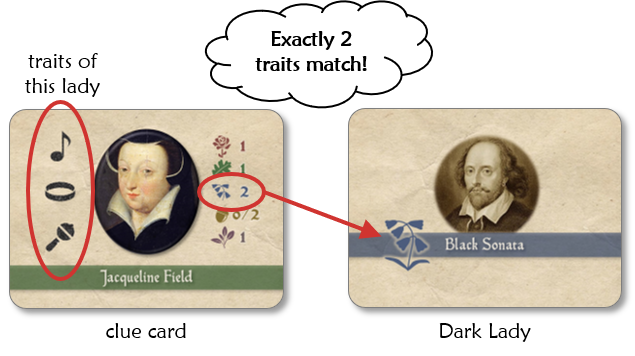 Above is an example of a clue – the Jacqueline Field tells you that since your Dark Lady is blue, it shares two symbols (out of seven total) with Ms. Field, the cookie lady.

Keep doing this – flip one, then pass, move, search, or fog, until you win or lose.

I admire the design of this game so much. That someone thought of it is really cool, but that gets 1% of my admiration. That someone spent the time and effort to create this game, make sure it works (with some computer help, I’m betting) is amazing.

It does several things extremely well.

It creates an NPC that moves around a map and whose location can be deduced through observation.
It helps you determine if you found the person by aligning holes in the location card with silhouettes on the stealth cards.
It forces you into some exceptionally hard choices – you don’t know where to move to, as she could be in multiple locations, then you realize you went the wrong way, but she moves towards you. Will you cross paths where she goes to where you were while you go to where she was, or will you stay in the same location and hope she moves to you?

I did not math out the cards to determine probabilities. I did think that she might be more likely to be at a location with more than one icon, so I tried to move to those with two or three, but did not go through and try to prove it. For all I know, the designer put in more stealth cards for locations with single icons. Sigh.

If the idea of a solo cat & mouse game grabs you, grab Black Sonata.

If you don’t like losing more often than you win, there is an ‘easy mode’ where you can both move and search each turn. It removed quite a bit of the tension, but actually made it feel less like a goalkeeper trying to stop a penalty kick and going the wrong way.

If you are looking for a tiny solo game, this might not be it. I think it would be virtually impossible to play on an airplane tray table. 3’ x 2’ is more like it, as clue cards need to be visible, as do the various decks to draw from.

There is scoring in the game, so you can do better than a previous time or not, but really, did you prove what the three symbols were with the clues and catch up to her again before you ran out of fog cards and ran out of time? If you can get better at this game, the designer thoughtfully includes ways to make the game more difficult. I won’t be needing those for quite a while.

Lorna: I love this game enough to have made a full color print and play version with a box (that is a lot of love for me). I also kickstarted the game to support the designer and for the nice cards as I’m not good at rounded corners. If you like deduction games and hidden movement you really have to try Black Sonata, one of my favorites do the year. https://opinionatedgamers.com/2018/04/10/black-sonata/

Ratings from the Opinionated Gamers
I love it! Jonathan F., Lorna
I like it.
Neutral.
Not for me…