Gizmos is a eye-catching engine building game that I first played back in April at the Gathering of Friends.  I did not learn the theme at the time, but as the rules go, players in Gizmos are competing to win the Great Science Fair by building the most impressive Gizmo.

Each player starts the game with a starting Gizmo card and a player dashboard which allows players to organize their cards according to type.  An energy storage ring is placed near the dashboard to act as a corral for the marbles that will be acquired in the game. Sixteen cards of each of the three level of Gizmo cards are shuffled and a tableau is made on the table with 4 Level 1 cards, 3 Level 2 cards and 2 Level 3 cards.  The Energy Dispenser is placed on the table and the 52 marbles (13 of each of four colors) are dumped inside. There is a track coming out of the dispenser that will show six marbles. 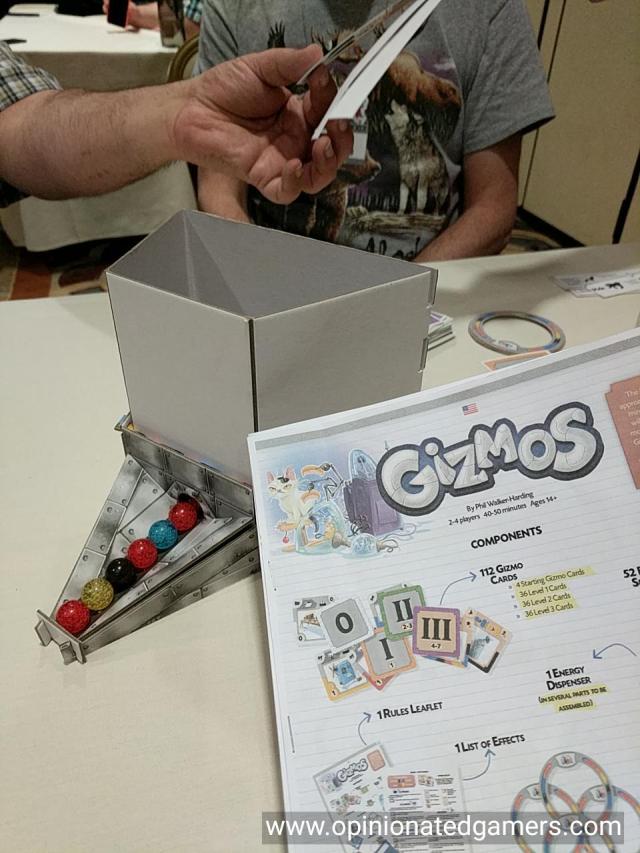 Going back to the player dashboard, the left most column is where your upgrades go.  At the top of the column as your basic stats for marble limit, file limit and research ability. These stats will change as you play other upgrade cards here.  The right four columns on the dashboard each explain the four basic actions.

File – File 1 Gizmo from the display tableau – this means that you take a card and place it next to your player dashboard – it is not active and it is not in any of your columns; but no one else can build it now.  Draw a new Gizmo of the appropriate type to refill the tableau

Pick – Choose one of the six visible marbles in the Energy Row.  You are limited to 5 marbles at the start of the game in your ring.

Build – Choose a faceup card from the tableau or a card you have previously filed away and build it.  You must pay the cost as seen in the bottom left corner of the card. Then place the card in the appropriate column under your dashboard.

Research – choose any level deck of cards and draw a number of cards equal to your research level, and you may choose one of the cards and then either Build or File it.   Put the unchosen cards face down in any order at the bottom of the deck. If you Build or File something, you will also trigger the effects of that column.

As you can see, there is a high possibility of chain reactions as certain actions or Gizmos might trigger other Gizmos into action.  There is no limit to the number of Gizmos that can be activated in a turn, but remember that each Gizmo can only be used once each turn. 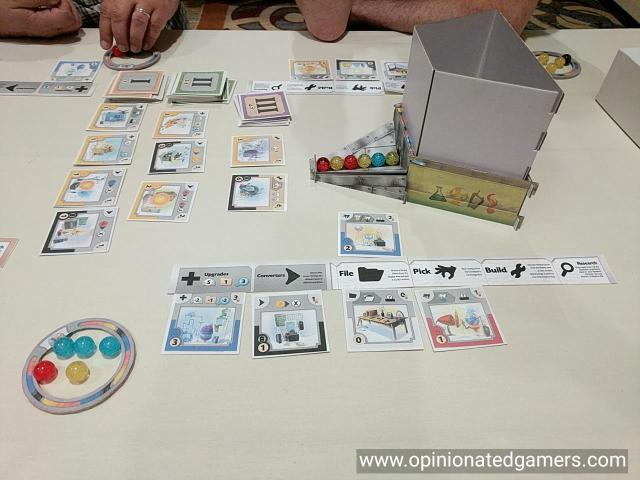 a player builds his 4th Level 3 card.  The current round is completed so that all players have the same number of turns and then scores as calculated.  Players score VPs for the Gizmo cards that they have built as well as from any VP tokens that were collected during play as a result of Gizmo activation.  Ties go to the player with more Gizmo cards.

This is a neat engine building game – with the added bonus of having the super cool marble dispenser.  The games tend to start out slowly as you really don’t have many extra abilities; but as you gain the level 1 cards, you’ll start to be able to chain things together.  Early on, I like to be able to get extra marbles, so I’m usually on the lookout for cards which provide those actions. Once you have a good source of marble income, there are a number of different ways to get where you want to go.  You might choose to increase your research ability and hope to get lucky with your card draws.

There is a good balance in the timing of the game; most of the games that I’ve played have come down to a race between one player trying to get the fourth level 3 card (which are generally high scoring) and another player who is going for the 16 (generally smaller level) cards.   I have yet to see someone dominate a game by scoring VP tokens along the way, but I have found that they often contribute a great deal to the final score, so I don’t feel like I can ignore them.

The initial turns in the game move quickly – as players don’t have many extra things that they can do.  However, near the end of the game – you should be prepared to wait a bit for players to figure out the right order to do things in.  If you have the right cards in your Gizmo, you could possibly end up chaining your entire dashboard… i.e. you could take a Pick action and choose a yellow marble, but then have a card in the Pick row that triggers a build (and then all the actions in the build row).  Once you have found a nice setup, it can definitely pay off to trigger that cycle again and again.

But – the game (and your engine) starts slow.  There is a nice balance early on trying to pick cards that might help you now – as in increasing your marble drawing ability or perhaps increasing research – but you always have to keep an eye out for cards that will work for your endgame gizmo.  In some of my games, I’ve really only gotten my Rube Goldberg collection of cards to work once or twice at its fullest ability; but those crucial turns are the ones which allow you to buy a level 3 card or perhaps gain enough resources and trigger enough build actions to push you over the finish line.

Phil Walker-Harding remains one of my favorite new designers, and Gizmos is another example of his ingenuity.  It definitely does not feel like any of his previous games, such as Cacao or Imhotep, but yet, it is another of his designs that is good enough to be granted a space in my permanent game collection.

Dan Blum (1 play of the prototype): It’s hard to judge a game like this after one play, but it seems like an interesting engine-building game. The limited marble storage has some potential to be frustrating if you just can’t put things together, but it does help move things along and probably prevents degenerate strategies. I’d like to play again.

James Nathan (5 plays with the review copy): I went into my first play with low expectations, but so far have loved it. For me, it’s an engine-builder with a nice arc –you’re able to run “baby” versions of your machine in a way that feels like you’ve accomplished things as you continue to build on your machine up until the end.  So it’s not a matter of building a great engine and getting it to trigger once or twice right at the end, but, rather, you can test smaller versions as the game progresses and ramps to the ultimate version. This I have found enjoyable.

I’ve seen where some players feel restricted by the cards available, or a first card gamble not synergizing with other cards available in the next few rounds.  I’d wager this is an edge case, and in my three plays, my engines have felt diverse –one engine rewarded me for picking red marbles, as I could easily duplicate and convert them; one rewarded multiple free picks for any color building; but my favorite had a hand size of 15, research of 9, and rewarded up to 8 marbles for filing!

My infatuation my fizzle at some point, but I can’t see that on the horizon yet.