Dale Yu: Gen Con 2018 Picture Post – in which you must read the captions 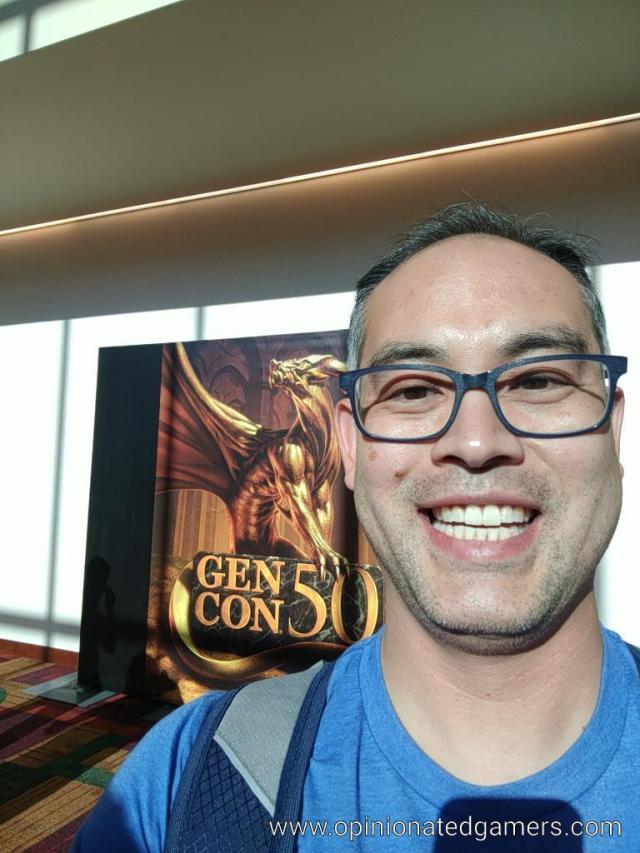 Before you get confused, I was also confused that they had recycled last year’s stuff right by one of the main entrances. I guess GenCon50 was so awesome, they wanted us to re-live it again this year – as usual, I only have one day free for the con – so Thursday was my “best 7.5 hours of gaming” while taking in all the sights at GenCon 2018 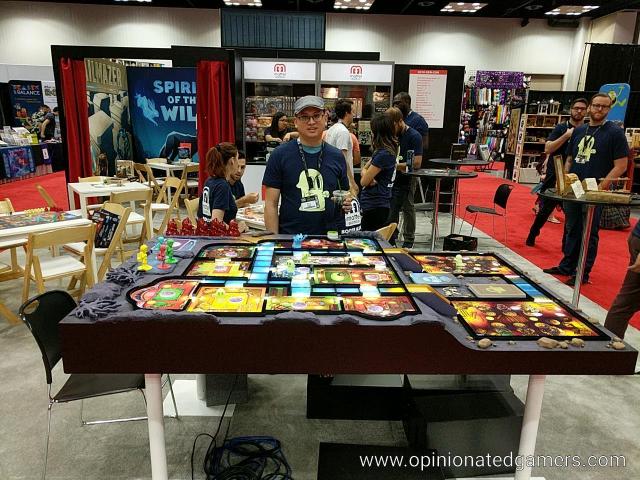 Right off the bat, I had an interview with the designer of Ghost Fightin’ Treasure Hunters, which was easily one of the best 2 Kids games in 2014. Brian poses here with the humongous sized board complete with the Creepy Cellar expansion. When I had left, no groups had yet defeated the expansion to win the coveted bronzed ghostie prize.

IELLO had 8 Bit Box, a sweet analog game system with modules that let you relive some of the video games from my childhood. My kids would look at this and have no idea what it was.

Grail games came all the way from Australia with a handful of new titles. I have both Yellow & Yangtze and Criss Cross from them and Dr. Reiner Knizia to play.

Inexplicably, management says that I didn’t do enough work developing the plush werewolf, and Bezier has cut off my royalties for this item. I officially protest.

Many of the Asmodee houses had Essen games in near-finished form… Here, The River from Days of Wonder available for play

Across the walkway… Orbis from Space Cowboys 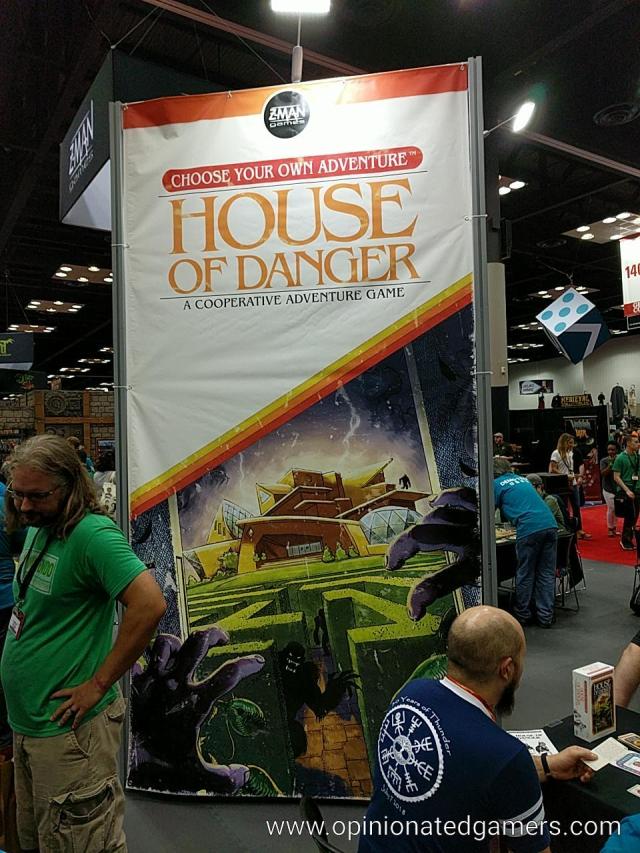 Many were saying that the Choose Your Own Adventure game from Z-Man was “what Time Stories wanted to be”. I haven’t had a chance yet to play and figure it out for my own, but I like the genre, so I’m definitely looking forward to it

The press liaison from Asmodee NA thinks that Mesozooic will be a huge hit. I didn’t get a chance to demo it, but it should be ready soon

Chris Wray in action. Playing a hotly anticipated game – Shadows Amsterdam – that was reportedly for sale (on the Internets) but definitely not for sale at the con (per the workers at the booth). This is likely a must-buy for those who like the mechanism behind Mysterium

The books from Van Ryder have been a big hit around here. Apparently, we’re not the only fans. I saw five new books which are all in the process of being translated and soon to be brought to Kickstarter! 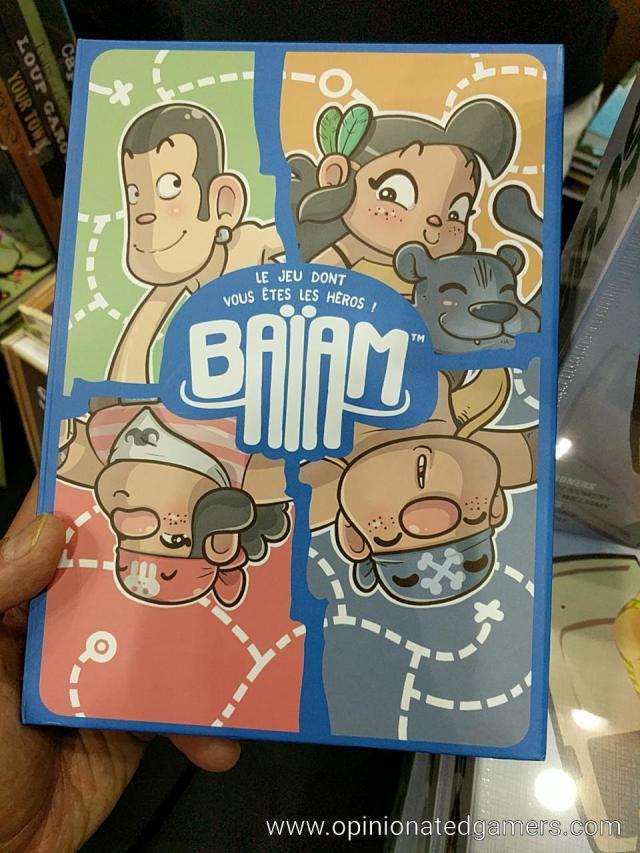 Also coming at some point from Van Ryder, Baiam – a book which uses the same choose-your-own-adventure-book mechanism. Here, each of the four characters has different powers. So, you might be on the same page of YOUR book as one of the other characters, but you might see different numbers because you can do things that they can’t… (and vice versa)

My board at the end of the game. Roll the dice, then draw the designs seen on the four dice somewhere on the board. You are trying to connect up networks of roads and rails on your grid. There is a basic game which uses the white dice. Each of the boxes (2 so far) also has 2 pairs of colored dice. you can use any of those pairs to add in variant rules. So, between my Red and Blue boxes, I actually have 5 different games!

Group Photo after the game. Eric Lang walked by, and I declared that this we should do our best Joshua Tree pose. (I suppose you have to be of a certain age to have owned the Joshua Tree CD) 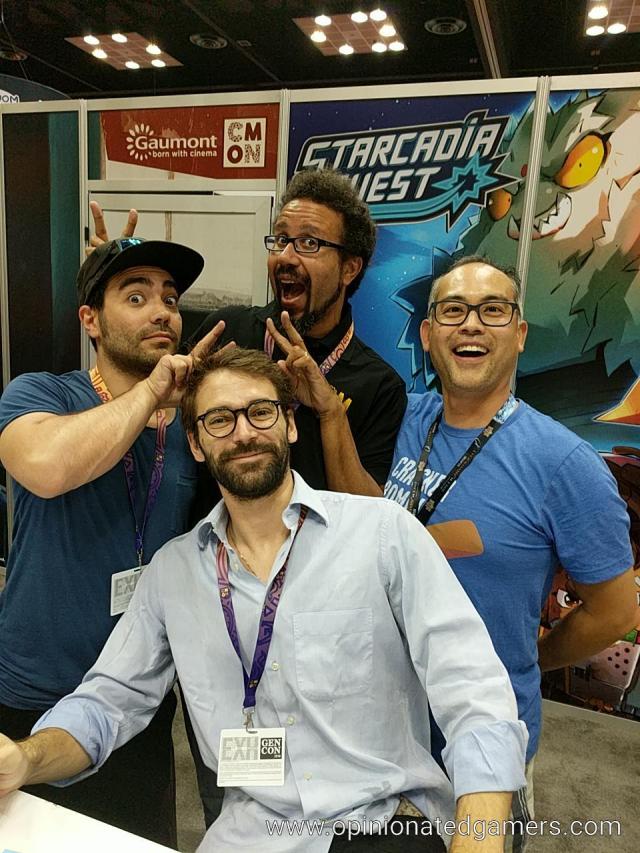 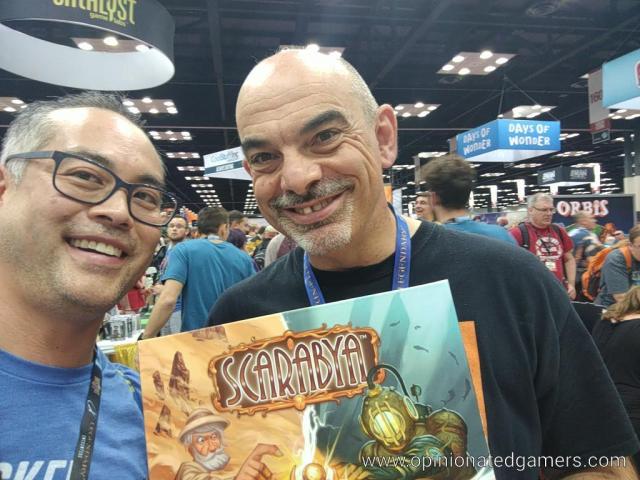 Bruno C. was at the show, he was nice enough to sign my copy of Scarabya from Blue Orange.

And I was intrigued to see that Ship Naked had a booth set up to help people who had purchased too many games… Shipping rates were quite reasonable. They had boxes there to purchase (also at reasonable rates) and they would be shipped from Ship Naked’s Indianapolis warehouse soon after the con… 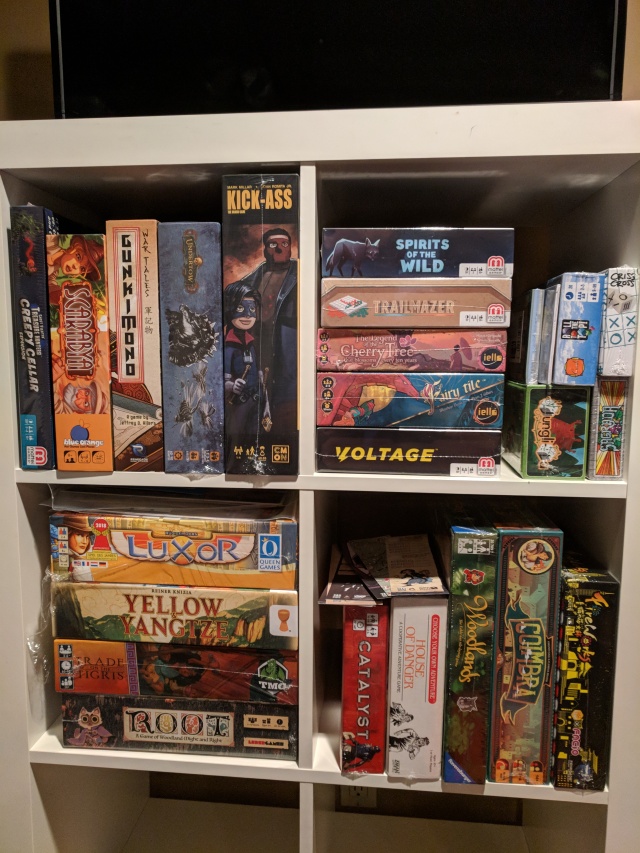 Here is the haul for my single day at GenCon. Lots of Gaming fun to be had in the coming months, and I’m sure that I’ll get a few more titles in the mail as well. Keep your eyes posted for reviews in the coming weeks!