To be clear – there are no spoilers in my review – but there are a number of strong cautions (EASILY FOUND IN SHOUTY CAPS) included below to help you avoid possible spoilers!

Break In: Area 51 is part of a new series of escape room games – but this one has a slightly different take on the usual story.  Instead of trying to break out or escape, in these games, you’re trying to break in!  The box and components here are a huge part of the game.  The box is a slanted hexagon that contains a 3D diorama of what you’re trying to break into… in this case, Area 51 – the mysterious area where there might be evidence of Alien visitors to our planet.  We previously reviewed Break In: Alcatraz, the first game in this series. 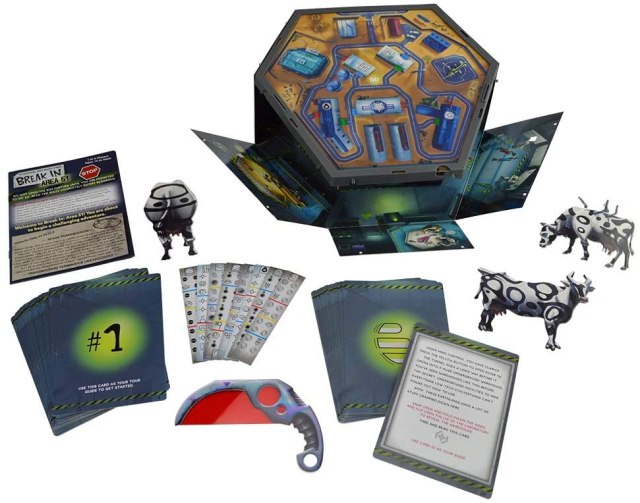 Your team works together to solve the puzzles in front of you to learn the secrets of the box.  As you will learn on the box and the publisher’s website – “Soon, you will be told to open the game board and unfold it, expanding your board and revealing the next layer of puzzles you have to explore to uncover clues that will lead you further inside! Along the way, you see wonderful sites, meet interesting characters, and do amazing things! “

When you first open the box, you will find a bunch of components taped to the lid of the box and a short instruction manual.  The rest of the box is the game itself – you will see an aerial view of Area 51, with the fencing seen on the sides of the box.  There are two numbered slots in the outer border of the hexagon. 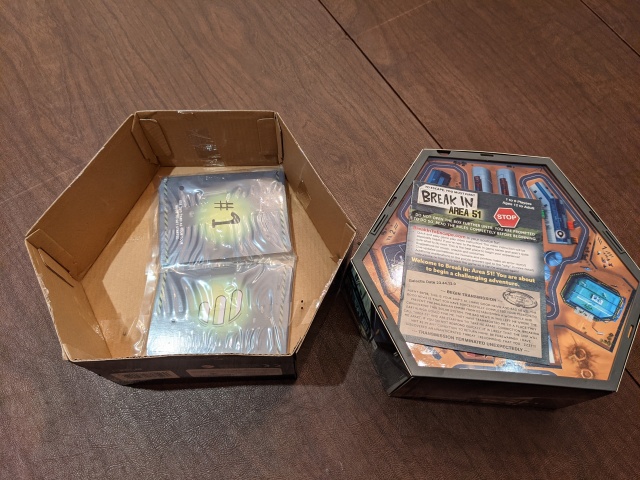 There is a deck of cards – which you’ll have to put together – AND IT IS IMPORTANT TO KNOW that all the cards form a single deck.  Interestingly enough, there isn’t a card on the bottom of the deck to prevent you from mistakenly reading the backs of the cards.  The rules weren’t 100% clear on how the cards would work, and we may have read the backs of three or four cards before we realized that we weren’t supposed to do that. (The contents just tell you there are 54 cards – and I would have liked slightly more info on how the deck was supposed to be set up to prevent spoilers…)

You will also get 8 solution sticks – these are double sided with two columns of icons all over them, each somehow subdivided by colored lines.  Finally, you’ll also get a alien knife  (a Quiss Ar-may knife) decoder.  This has one of those red film strips embedded in it – you don’t have anything to decode just yet, but surely you will.  I WOULD ALSO CAUTION YOU not to look for things on the parts manifest.  Interestingly enough, there are some things in the box that you don’t yet have access to… and it felt to me to be slightly spoiler-ish to tell me on the back of the box and in the rules that I’m going to have a 3-piece power drive puzzle in the box.  Why not just keep it all secret?

Anyways, once you get things set up, you have a transmission to read on the front of the rules which gives you the outline of the story.  The transmission is from an alien ship that states that it has been found by humans, and that the ship has been transported to Area 51.  ONE MORE BIG CAUTION – the cards at the top of the deck that is marked #1 says “Use this card as your tour guide to get started” DON’T READ THIS CARD UNLESS YOU ARE REALLY STUCK.  These cards are pretty spoiler-y, and it could seriously reduce the amount of fun you will have with the game if you accidentally read a play-through of the first puzzles by reading the back of this card.  These cards really should have had a stronger warning that what you get with them as they essentially tell you how to get through the first third of the game.  I’ll repeat – DO NOT READ THE BACK OF THE #1 CARD UNLESS YOU ARE STUCK.

There are two types of puzzle solutions that you’ll encounter.  The first is a card symbol – this will be a symbol in a glowy green circle.  In fact, a few of these are seen on the hexagon when your first unveil it.  Any time that you see one of these green circles, you can look thru the deck to find the card with a matching symbol and then read that card.  The way the game is set up, you shouldn’t have to look far.  Generally speaking, whenever you find one of these symbols, the needed card should be the top card on the deck. 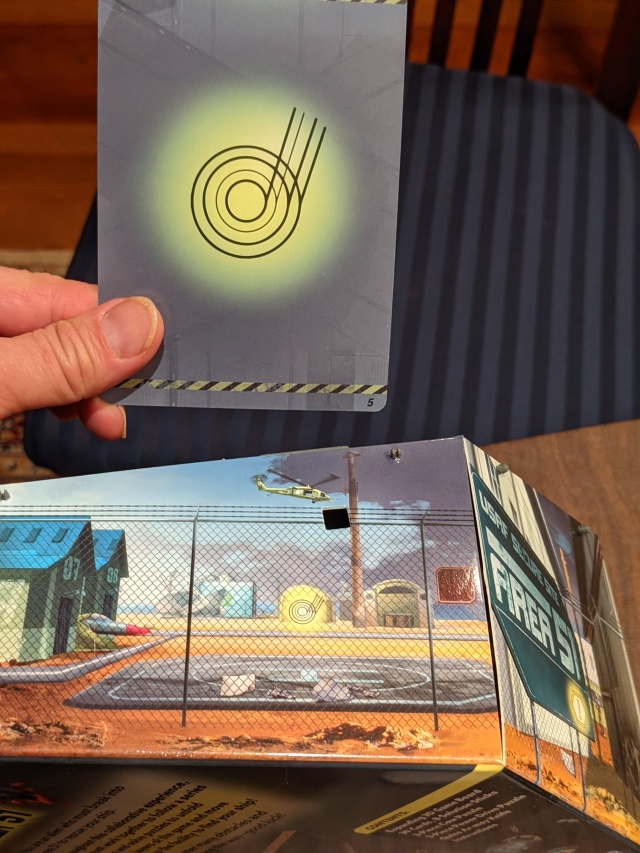 The other kind of puzzle is location based, and you will these icons with a box around them.  The icon in a box will direct you to a specific solution stick – you’ll need to figure out which decoder slot to put the stick in, and which color line to drop the stick to.  Many of the puzzles are these three-part affairs where you need a number, a color and an icon to get to the solution.  You put the solution stick into the right slot and then look at the hole in the box to see an icon.  If you see one that matches the top card of the deck; you’ve solved the puzzle and can reveal the matching card.  If it directs you to a hint card (almost every puzzle comes with a hint card).  These puzzles are well constructed – or well defined.  When you have a puzzle of this sort, the card often explicitly reminds you what you need to figure out, and it usually refers you to get a hint card out of the deck.

When you use the solution sticks and get an incorrect answer – you are almost always referred to the hint card.  The hint card is broken up into a few different labeled areas – number, symbol, color and overall solution at the bottom.  If you feel like you need to read some hints, use the red film on your radio to reveal the necessary portion of the hint card.

These Break In games have a neat physical setup where the box and its components become part of the experience… and I’ll admit, it’s pretty darn neat to see the thing unfold and have the next scene come to life – that is one of the big strengths of this game.  The panels of the box are held on with some pretty tight plastic pegs… you might think that you’re going to rip the box, but just be patient and wiggle the sides carefully until you can release the panels.  It’s a good system and the tightness helps hold everything back together again when you put it back together. 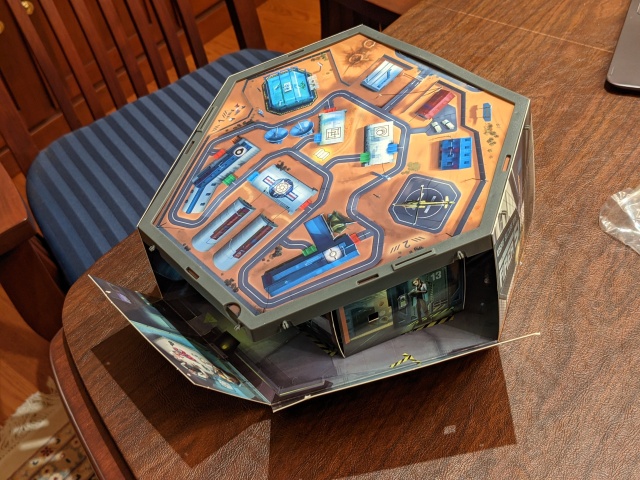 There’s not much else I can tell you about the box that doesn’t spoil it. So, let’s move onto the puzzles.  In general, the puzzles here are moderate in difficulty.  I found one of the to be quite complex, but the most were pretty middle of the road, which means they are perfect for the likely target audience. I did not require any hints to solve any puzzles, though the aforementioned complex puzzle took an assist from a family member to get me over the hump.  The solution stick is a clever and elegant way to auto-check your answer.  Sure, you could just jam the stick into all the available holes at all the available depths, but there’s no fun/joy/honor in that.  Anyways, the puzzles are well constructed, and there are ample hints available if you need – so you should just take your time and work through the puzzles as you come across them.

As with the other game in the series that I’ve played, the story is linear; you have  to work through the current puzzle card before further cards are revealed.  Most of the puzzles are fairly complex, and while there might only be one active puzzle, it usually takes some thought to get to the solution.  Solve enough of these puzzles, and you’ll likely get a change in scenery.  It’s a pretty neat trick how they managed to get all this stuff in the box!  You’ll have a few things to look forward to – remember, they tell you that you’re gonna get a Power Drive puzzle; but where/when remains a surprise…

Once you’re done with the game, you’ll find that you haven’t destroyed anything.  You can carefully pack things back up and then share this great experience with someone else.  I did put the spoilery starter cards in an opaque envelope to hide them and prevent spoilage…

On the whole, I really liked the experience.  It seems that the company is new to the escape room genre, and there are some rough edges – all noted above – but none of them were gamebreaking.  We were able to avoid unintentional spoilers (for the most part), and we got to the final solution in just over an hour.  The 3D box is fantastic, and the puzzles are of the right level for families and casual gamers.  This game is part of an initial set of three games – the other two are Break In: Chichen Itza and Break In: Alcatraz.  Based on our experience with the first two, I’m definitely looking forward to trying out the third in the series.

If you want to purchase it, you can use our Amazon affiliate link: https://amzn.to/3bOTEyv   (any commissions earned from this link help to keep our site afloat!)