Diceland is an older roll and write from NSV, one of the first ones I can remember owning – according to BGG, released in 2018.  In this game, each player gets a map which is a rectangular-ish blob of hexes, split into areas of 6 different colors (3 to 6 hexes in size) as well as two starred hexes in each color.  There is a single white hex in the center (with an X already written in it) that acts as the starting space for each map.  The art on the double sided boards are all a little different from each other, so each player will have their own unique map in a game.  The bottom of each board has a grey area where players can keep track of their progress in the game.  Players race to be the first to “finish” their board.

The active player for the turn takes the 6 dice (each with one face of each of the six colors) and rolls them.  The active player chooses any one of the colors rolled as their color for the turn, and they set aside all dice of that color.  Then, the active player decides if he wants to continue rolling (though he can stop rolling and accept the roll as is).  If so, take all the dice not of the chosen color and roll again.  If you do not roll any more of the chosen color, the rolling phase is automatically over. If at least one of those dice have the previously selected color, set it aside with the others, and the player gets to decide if he would like to make one more roll.  After the third roll, the dice results are locked.

The active player then must use all the dice in the chosen color to cross off spaces on his board; one space per die rolled in that color.  However, you are limited to marking off spaces in a single block of a color, and you may not start a second block in a color until you have completely finished the first.  Additionally, each mark must be made in a hex that is directly adjacent to a previously marked hex – this is why each player starts out with the single white hexed pre-marked on his board.  Also, you have to use all the dice rolled; if you cannot, then you cannot use any of the dice.  It is not necessary to fill in all the spaces in a board grouping on one turn, but you must use all of the dice rolled.  If the player has managed to mark off all the spaces of one color on his board, he must announce this out loud and then can mark off the color completed icon in the lower left corner of the player board.

All of the other players then choose one of the colors from the remaining dice, again following the same rules – they must use all the faces rolled of their chosen color, and they are limited to marking spaces in a single grouping of that color on their board.  Again, if a single color is completed; it should be announced and the corresponding icon marked off of that player’s board.

Once all of the players have marked off their hexes from the roll, players then announce if they have filled in a treasure space (one of the 12 spaces on the board with a star in it).  They mark off the corresponding treasure icon in the bottom row of their board, and then they get a single roll of 5 dice – only 5 dice are used because one die remains in front of the current active player so that no one forgets who should go next!  On this bonus roll, there are no re-rolls, and only the player rolling the dice gets to use the roll.  It is possible to chain multiple treasure rolls together if you cross off another star space.  If more than one player needs to make a treasure roll, it is done in clockwise order from the current active player.

The dice are now all passed clockwise and another turn is played in the same fashion.  This continues until one player has crossed off all the spaces in any color AND 9 treasure spaces (out of twelve possible).  If it happens after a treasure throw, that player wins automatically.  Otherwise, the victory condition is reviewed just before the dice are passed to the next player; and in this case, it is possible for multiple players to win.

The game plays pretty quickly, and the fact that players generally get to use part of every roll keeps everyone engaged in the game.  Obviously, you can make the most progress when it is your turn as you control the dice and decide which color you want to use.  OF course, there is always the risk of being too aggressive (or simply unlucky with the roll) – as you have to state which color you are going to use from the first roll, it is possible that you can end up with more faces in your color than you can use; and if so, bad luck; your turn is essentially lost.  As the inactive player, there’s not much need to look at the dice until the final roll as the active player will re-roll all dice not in his color if he chooses to re-roll – but once the final roll is settled on, then it’s time to make your decision.

The restriction of only using one block per color can be surprisingly tricky.  I have found that I often will stop one space short of finishing a block on my turn; in part because I don’t want to lose a big roll if I am unlucky and roll two more of that color – but also because it is common to have a single in a color come up on someone else’s roll.  If you’re in a really tight spot, in rare cases I would use an entire turn just to pick off one or two spaces to finish a strategically important block (to either grant access to something further away or to allow you to start working on a different block of the same color).

You can always glance around the table and see the progress that a particular player has made towards winning – though i tend not to even worry about defensive rolling (or lack of re-rolling) until near the very end.  As this is a race game, generally I personally worry more about my own board situation and just try to do the best I can and hope that it is faster than my opponents.

One added touch to the game, which has in fact made it a keeper in my collection, is the nice packaging.  All of the boards, pens and dice fit nicely into the insert, but it is the box top that makes the game.  A felt pad has been adhered to the inside of the top cover which means that the top of the box is a perfect padded dice tray of nice size (and with a minimal lip so that everyone can see the dice which are rolled).  I will often grab this game, even while playing something else, to use the box top as a dice tray.  I have not come across another example of this, and I am a little surprised as it is a really nice touch.

Games take 15-20 minutes which puts this in the perfect filler range or maybe a light opener/closer to game night.  The rules are super easy to teach, and the constant action of writing Xs down on your board on nearly every turn keeps players interested in each and every roll.  This has clearly stood the test of time seeing as it remains in the game collection three years after initial acquisition – and that is probably the best review I can give for this game (or really any game!)

In 2021, a new expansion came along for Diceland, one of my more played roll-and-write games.  In this very small expansion, you get 4 double-sided boards, each depicting a different European country.  Sure, the shapes are somewhat approximated with the hex grid, but you can generally tell what they are; and if you have any questions, there is an iconic silhouette in the bottom corner of each board to help you identify the country.

The boards here are a little bit smaller than the base edition – in Diceland: Europe, there are 85 spaces on the map whereas you have 108 in the base set (though only 97 are written on).  Additionally, there are fewer treasure spaces; only one per color in Europe as opposed to two per color in the base. 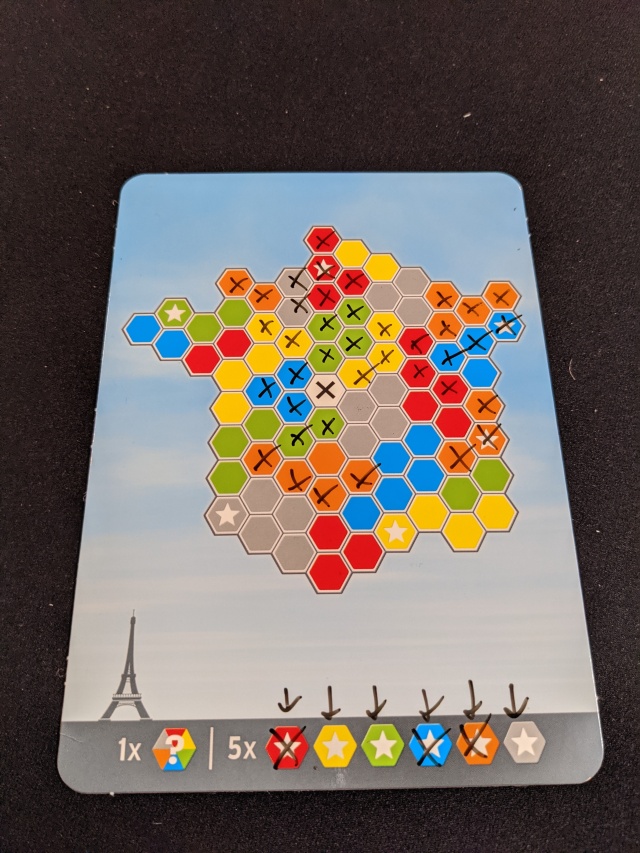 The game end conditions are now marking all the spaces in any color AND having 5 of the 6 treasure spaces.  Otherwise, all of the rules are the same as the original base game.   The changed end condition and smaller board leads to a somewhat faster game – which is honestly fairly welcome.  Games now come in around 15 minutes instead of 20-25, and for the light weight of the game, that’s the sweet spot of game length for me.

The new boards are packaged in a slim format, just shrink wrap around the boards and the single page of instructions.  As you need the dice and the markers from the original game, there is no need to replicate those in the packaging – and it is quite nice that the new boards fit just fine in the slim box of the original meaning that you can store them all together in one place.  The only thing you need to remember is that you can’t mix the boards while you play as they are of different map sizes…

This expansion is truly more of the same, so if you liked the original, this will give you a few new maps to play on.  As it doesn’t do much different though, I wouldn’t say it’s essential… For me and my group though, as it plays a little faster and it feels slightly more thematic to be drawing on a real country instead of a blob, it’s likely that we’re only going to be playing on the European boards for the foreseeable future.