When the original Pandemic Hot Zone North America came out, I thought that it was a great idea to shrink down the hugely popular cooperative game and sell it at mass market stores at a lower price point.  Given the timeliness of the theme, it seemed like a great plan.  From what I can tell, it has been a success, and I was not overly surprised to see that a followup game was released in the series – namely, Pandemic Hot Zone: Europe.  What did surprise me is that there are plans for a full set of games AND you can combine those parts to create larger and more complex games.

The elevator pitch for Pandemic Hot Zone is right up my alley – take the familiar gameplay of the original Pandemic, but slim down the complexity a bit to fit in a 30 minute time frame and in a smaller more portable box. From my perspective, that was enough to get me interested, and for some of you, that might be the end of the review that you need to read.   You can also read our review of the first installment of the series here… 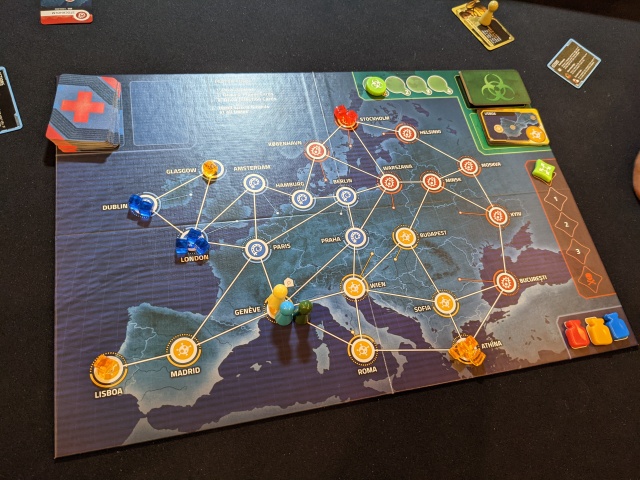 But for those of you who want to know more about it… (or in case you’ve never played a Pandemic game before…)  In this game, your disease fighting team is only interested inEurope.  For this particular game, you’re only worried about controlling the disease on this single continent…  The team plays cooperatively – you will all win or lose together.  Each player is given a character card, and each player will have a unique ability that only their character can do.  In this game, there are 3 diseases affecting the continent, and the goal is to cure all three diseases before they overwhelm the continent.  While each player gets to play their individual turn, discussion and cooperation is encouraged between the team to come up with the best plan possible.

The game board has 24 cities on it, separated into three different colored groupings.  There is a card that corresponds to each city.   These are shuffled with the four event cards to make a deck, and each player gets a face up hand of 2 cards dealt from it.   Hands in this game are always face up on the table so that everyone can see them and help develop a joint strategy.  There is a hard limit of 6 cards that can be face up in front of any player.  The rest of the deck is split into thirds, an epidemic card is shuffled into each and the three parts are re-stacked to form the Player deck.  If you are looking for a more difficult game, you can shuffle 1 or 2 Mutation cards into each deck portion as well.  These cards give the team additional obstacles to overcome in their race to cure the continent of cooties.  (Note that these cards are different than the Crisis cards used in Hot Zone North America).  The Infection deck is then shuffled, and the top 2 cards get 3 cubes on their city, the next 2 cards get 2 cubes on their city, and the next 2 cards get 1 cube on their city.  The board has tracks for both Outbreak and Infection Rate, and a marker is placed on the starting space of each.

1] Do 4 Actions – you choose 4 actions from the list below, you can repeat any action multiple times.

Additionally, during a turn, ANY player can play an Event card – it does not count towards the limit of four actions a turn.  The only exception is that they cannot be played while you are already resolving a card.

2] Draw 2 Player cards – draw the top 2 cards from the Player Deck.  If the deck is exhausted when you need to draw, the game ends and the team loses.  If you draw an Epidemic card, you increase the Infection Rate by 1, draw the bottom card from the Infection deck and place 3 cubes on that city, and the shuffle the discard pile and place them on top of the infection deck.

3] Draw Infection cards – one at a time, draw cards from the Infection deck until you reach the number of the current Infection Rate.  Infect each drawn city by placing a cube of matching color into that city.  If there are no cubes available to be placed, the team loses.  If you would be placing the fourth cube onto a city – you do not place it, and instead you have an Outbreak.  Move the Outbreak marker down by one, and then place an infection cube in each city which is directly connected to the Outbreak. This can sometimes lead to chain reactions; each is resolved separately.

As long as the game hasn’t ended – the next player takes their turn.

The game is won immediately when cures for all 3 diseases have been discovered.

The game is lost immediately when you cannot draw from the Player Deck, when you cannot place a cube of a certain color or when the Outbreak marker reaches the last space on the track.

Overall, I think this is fine new edition of Pandemic; and one that fits both my gaming lifestyle as well as gaming storage just fine.  I prefer the shorter game length here – there is still plenty of game to be had, but this is now in the superfiller category, and that means it will hit the table a lot more often around here.

For those of you familiar with the original game, here are the differences:

In my plays so far, this game seems a bit easier than the original Pandemic – but I think you would expect this given the smaller board and the lower number of things you have to deal with.  The level of difficulty feels about the same as Pandemic Hot Zone North America.   For me, the biggest change was the way that all of the locations seemed accessible.  Nothing really ever felt more than a turn away, and that did take away from some of the tension of the original.  Of course, if this was your introduction to the series, this might prevent some frustrating game sessions where your newbie ability wasn’t quite up to speed with the difficulty of the game.  The game can still be made more difficult in setup – namely with the inclusion of more mutation cards.  But, given the more mass market target for this game, having it be a bit easier at baseline is probably a good decision.

But, the neatest thing about the game is they way that you can combine the bits with Pandemic Hot Zone North America.  You can mix and match the special role cards (8 total between the two games) to get a refreshing mix of abilities.  You can use some or both of the Crisis (North America) and mutation (Europe) cards to make the game more and more difficult.

Interestingly, there is also a new 2p only version of the game called Hemispheres which uses both Hot Zone North America and Hot Zone Europe.  In this combined version, each player controls their own team of researchers and can use them on both of the boards.  The game is won if all of the diseases on both boards are cured.  The players can move back and forth, working on both boards on each turn – it is as if you are playing two games of Pandemic together at the same time.  It is quite a challenging form and a great way to enjoy the game when you only have 2 players available.

As with North America, the game is available online in a print and play form, and all of the rules to the different variants are also available – https://www.zmangames.com/en/products/pandemic-hot-zone-europe/

While the base game here is on the easier side (which again might be a good thing given the mass market nature of the game) – the ability to combine some or all of the game with Pandemic Hot Zone North America makes this a very appealing game.  I look forward to seeing how the upcoming three or four following expansions will give even more permutations and challenges!