If you are a regular here to the blog, you’ll know that we enjoy escape rooms and escape room/puzzle games (reviews here – https://opinionatedgamers.com/?s=escape+room)

We were recently contacted by a company, Mobile Escapes, from Canada – they are a company which did in-person escape rooms in the before times, but like many other companies, they have pivoted to online adventures which allow people to have fun at home and remain socially distant.  I’d like to take a chance to write about the experience, in a spoiler-free fashion.

So, we were given codes to try two of their three online escape rooms – and we managed to get a group of five puzzle solvers for each attempt.  The TL;DR review – we really had a good time with the two rooms, solving one in 31 minutes and the other in 34 minutes, and we didn’t need any clues.  We liked them enough that we are planning on doing the third room on our own as we had such a good time with the first two.

How does this site work?  In short, these adventures are self-contained and unmonitored.  You book the room (min 2 players, 15 CAD per person), choose a time when you want to do it, and the organizers will send you a hyperlink.  This link is active for a total of 5 hours – though it is likely that you’ll only need an hour or so to complete the adventure.  You are on your own when you start though; there isn’t anyone online watching what you are doing, you have no one to ask for help other than the built-in help system.

All of the information that you will need for the puzzles will be contained on the website.  You should not need to refer to anything else online, though you may find it handy to take notes somewhere to aid your puzzle solving.  All of the solutions are entered thru the interface, and you get immediate feedback whether you are correct or not.

The introductory email that you get will give you both a Master Link and a Participant link.  Each link gives full access to the puzzle, but only the Master Link has the “official time”, and only the Master Link can ask for hints.  This is a good way to simulate the action in a real puzzle room, because each participant can explore on their own, they can unlock/open things on their own, etc.  Just like in a real room where the players often don’t stick together, but each player can go off and explore whatever catches their eye. 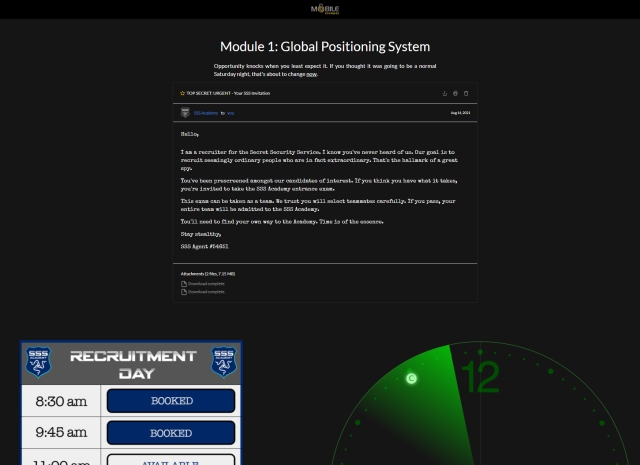 The interface is visual – there are photos and videos which you’ll be able to explore.  The photos are well done, and you can zoom in on them, (sometimes up to three times!) to look at all the details.  I did the first puzzle on my 24” desktop monitor and it was clear as day.  To contrast, I did the second episode on my 14” laptop, and I still was able to see everything in enough detail to solve the puzzles.

While it feels like the puzzles are open-ended, the whole thing is fairly linear.  For the most part, there is only one puzzle at a time which is “solvable”.  You might be able to see the clues/information for a bunch of puzzles, but when you click on the links, you will only have one puzzle which accepts a solution at any time.  Your goal is to figure out which pieces of visible information are needed for the puzzle at hand.

The difficulty level was just fine for our group; as I mentioned earlier, we managed to get through both scenarios without needing hints, and while there were a few puzzles which required a bit more thinking, we managed just fine using only our grey matter.  They are rated ⅘ and 4.5/5 on the website, and while I think they maybe were 1 step lower out of 5, I’ve also done a bunch of escape rooms in person and online, and that may account for some of the difference.

The online escape rooms are obviously not the same as the in-person rooms because there aren’t any dexterity/manipulation puzzles possible in the online setting – but these online adventures are still very entertaining.  I found both enjoyable experiences, and as I mentioned earlier, we are trying to coordinate our schedules to do the third one on our own.  That’s probably the shortest review I can give – we liked them so much that we want to spend money to do the final one.