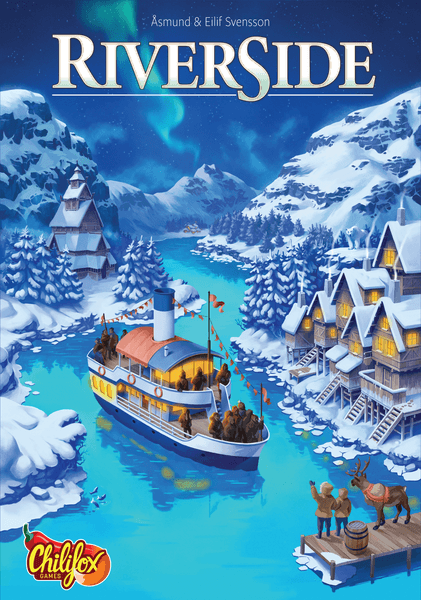 The story (per the rules):  Far to the north, in a remote winter land, rivers are frozen most of the year. When the villages along the riverside eventually are accessible, a small river cruise company offers exotic tours like polar bear safaris, reindeer trips, ice fishing, and more. Lucky tourists may even get a chance to see the northern lights. You work as a tour guide trying to attract tourists to your guide boats for spectacular excursions.

One of the designers, Eilif Svensson, has had a number of games that we’ve reviewed (and many of them are roll-and-writes) – so it came as no surprise that his new company’s maiden effort would also be a roll and write.  However, Riverside is a different kind of roll-and-write game, there is more than just a score sheet.   The game comes with a modular game board, which composes the route for the game. 10 tiles are randomly set out on the table to form the path of the river.  For a more complicated game, you can also include the 2 extension tiles as well.

On a river cruise boat, everyone follows the same route, but you can take your tourists on different tours using the dice to determine where you go and what you see. You may plan ahead, but beware, the dice may force you to change your plans.  Each player takes a scoring sheet and a pencil, and the game begins.

You start each round by rolling dice into a common pool.  Each dice color represents tourists with a preference for one specific type of excursion (and you have one boat on your sheet for each of these 5 colors). The transparent green die is “wild” and represents the northern lights, something everyone wants to see.  The green die is automatically put on the upper half of the captain tile (the heating half).  The other 5 dice are examined, and the median die is determined – easiest to line them up by value and then the center die is the median.  Any dice whose value is above the median is placed in the heating area.  All other dice are placed on the bottom half. 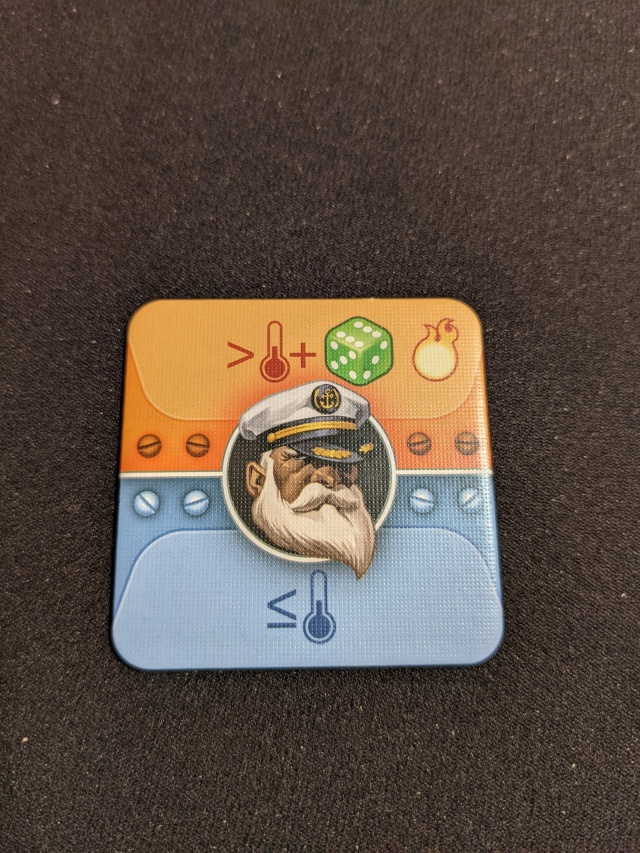 The cruise boat is moved a number of spaces on the track equal to the value of the median die.  The ship only moves along the outer spaces, never taking the “short cuts” that connect the two sides of the looping river.  Simultaneously, each player chooses one die of one specific color (without physically taking it) and may also add the value of the green die to it if they wish – then they fill seats on the matching color boat on their own player sheet.  If you have chosen one or more dice from the heating (top) area of the captain tile – that is, the green die or any dice above the median – you have to cross off fire symbols on your score sheet equal to their pip count in order to use them.  You only have 14 total fire symbols to use all game!

When you cross out seats, you can start in any row, but must cross them out from left to right.  You do not have to finish a row before starting another.  But, whenever they have completed a row of seats, they have sold a group ticket of the corresponding color (excursion). The longer the row, the more points they get; place a mark in the ticket icon at the end of that row. Additionally, this ticket is valid for the remainder of the game: Every time they go on an excursion in a village of this color, they take this group with them to earn even more points.  You also will see icons for bonus marks at the end of the row.  You immediately can make the designated number of markers in the corresponding boards based on those icons.  This could set up a chain reaction where you finish another row and get even more bonus marks.

As you are marking out spaces on the boat, you will notice that there are 2 special purple spaces per boat (always in different rows).  Whenever you mark both of these purple spaces, you immediately activate the royal power of that boat – seen near the bow.  Each of these actions is a one-time special action that can be used at any time – this might let you do two excursions in a round, use the green die without marking off fire icons, or increasing your range for one turn to 6 spaces instead of 3.

Once all the players have finished making their marks, each player can choose to go on an excursion.  Choose a single village within 3 spaces of the ship (and you’re able to use the shortcuts at this time), though you can cross out one of your 3 one-time use +1s on your sheet to extend this range.  At the village you can reach, then multiply the value of the chosen village with the number of crossed out tickets you have of that color.  Write this in the leftmost empty scoring space to the right of your boat.  There is a special stave church village at the midpoint and the end of the trip. If you choose this village, you instead multiply the total number of completed tickets with the stave church value, and a special area on your sheet to score this. Note that your current score must be strictly higher than the number to its left.  Note that you only score one color per excursion, even though many villages offer multiple colors.

The game is described as a different take on the roll and write game, and I think it is both a true and false statement.  I suppose that it is a bit different because there is a modular board that makes you have to pick a slightly different path each game – there isn’t a best path that can be solved.  However, some other RAW games get around this by providing some different layouts on the sheets – but sure, the modular board gives you a much more varied set of possible setups.  It also allows you to include the additional 2 river pieces in the extension if you wish to play with it.

At the start, the goal is to cross off marks as quickly as possible, as you’ll gain momentum by finishing rows and getting bonus marks.  Additionally, you really can’t score well on excursions until you have marked off some tickets!  Of course, there are a lot of different ways to go about this.  You could play it safe and take the highest “safe” die and save your fire marks.  You could also decide to add in the green die (or take a heated die) to go in a different path.  Also, while you’re filling in the rows, you might choose to start two of the longer rows to fill in the purple spots as the royal bonus actions are quite valuable and powerful when used at the right time.

For a roll and write, there is a lot to think about, and it does seem to play a little less quickly than most.  Once the dice are rolled and placed on the captain tile, each player than has to calculate a number of things… Which rows will be filled in, and which bonus marks will this trigger?  Also, which excursion site do you want to visit, and will you have enough tickets filled by that time to score points?  The values of the villages vary from 4 to 12, so you’ll end up doing all sorts of multiplication in your head (or on your phone) to figure this out.

Additionally, it’s not as easy as simply getting the highest value for the turn; there are other things to consider.  As you must continue to log increasing scores per color, you might be willing to take a suboptimal score now to set up a second score later in the game.  You’ll have to carefully monitor the villages that you’ll have access to in the future to figure out your best plan.  Finally, don’t forget about the Captain score – you’ll have to consider both the stave church excursions as well as your lowest color score – and this could also change your plans.  All told, early turns go quick, but once you near the midpoint of the river path, turns can take a bit of time as you have to calculate scores for different villages (and different marking patterns), maybe a minute or two?

As the game is dice based, there is a bit of uncertainty in the length of the game, as the distance the tour boat moves is determined by the median die value.   There are 33 spaces on the track, and you’d think that the average expected value of 3.5 for the median would normally portend 10 rounds; but we’ve had games as short as 8 turns, and one that went 13?  But, in addition to an uncertain number of rounds, the variable movement of the boat makes it hard to know for sure that you’ll be able to reach certain excursions near the end of the game, and it is this unpredictability that makes the game really interesting to me.

When you get to the final scoring, just break out your phone and use the calculator.  There are a lot of things to add up, and our winning scores have been in the 400+ point range – I think our max score so far has been 499.    There are enough things to add up in this game that I find it very hard if not impossible to see where I stand in the midst of the game.  Luckily, as we’re playing simultaneous solitaire on our own sheets, this doesn’t matter – my job is to simply maximize the score on my own sheet at all times.

I’ve played the game nearly ten times so far, both solo and with other people, and I still enjoy it.  It is a very tough puzzle to figure out, and i like the challenge that the convoluted scoring system presents.  We still have a lot of the scoring sheet block to use – especially because the sheets are nicely printed on both sides – but I suspect that this might be the rare roll and write where we use all the sheets!

Mark Jackson (3 plays): Dale did a great job of explaining what’s fascinating about the game. I’ll note that playing it solo is fun as well. I’m looking forward to getting my own copy!