Agricola is one of my favorite games – and as I mentioned yesterday, it’s the game that truly started my boardgaming “career”.  In this review, I won’t go over the mechanics of the game – I think the 18,000 words in the previous piece should cover it.  What this review will focus on are the changes between the original and the revised edition.

In some ways, I wish that there had been at least some sort of subtitle on the new version.  As the two games share the same name, this will almost certainly lead to confusion when people are referring to one or the other version of the game.  However, the new game is very similar to the old version, and the bulk of the rules are the same.

What’s different with in the revised Edition? (and what do I think about it?)

# of players – the Revised version plays 1-4, the original version played 1-5.  So, obviously, your farming party has to be a bit smaller when playing with the new version.  I have read reports that the main reason for keeping the player count lower was to keep the number of components down and therefore keep the MSRP down in a reasonable range.  So, it’s not like they’re saying the game doesn’t play well with 5 – they just don’t think everyone needs to pay for the pieces to play 5.  Furthermore, there appears to be an expansion coming which will allow for a fifth (and possibly a SIXTH!) player.  Advantage: PUSH

New board – the revised board is a jigsaw puzzle affair with different “pieces” available for the different player counts.  In the old version, you had to fish out cards with the appropriate base actions for different player numbers.  The revised version has a much neater and attractive version.  Advantage: Revised

The full board for 4p

Closeup of the jigsaw piece for 4p. The right of the break is the permanent board…

Closeup of the jigsaw piece for 3p. The right of the break is the permanent board… 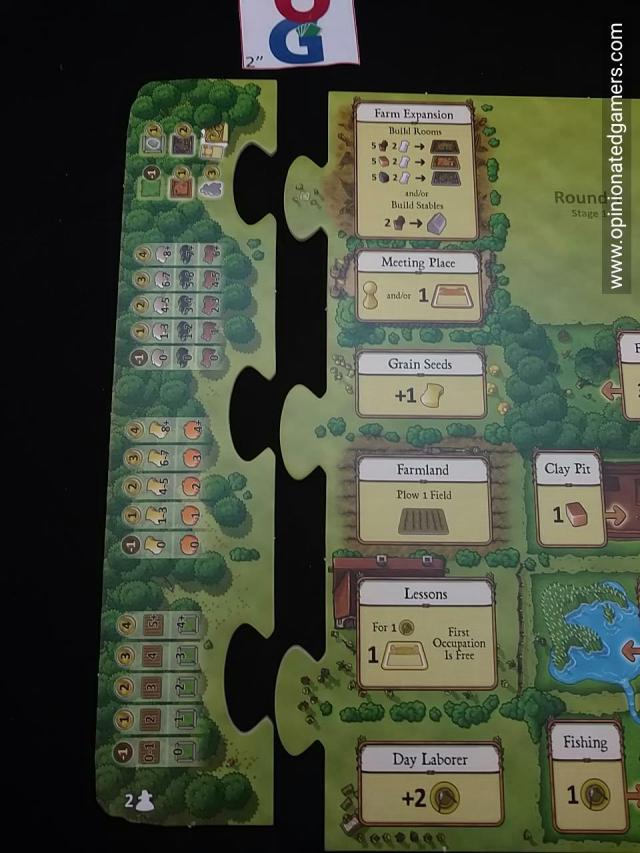 Closeup of the jigsaw piece for 2p. The right of the break is the permanent board…

Cards – For me, the strength of the original game was the vast selection of cards (360 total) available for the players to use.  Detractors of the game brought up multiple examples of poor card draws, unbalanced cards and games that were essentially decided by players who were dealt better cards from the start.  The revised version has a carefully curated deck, choosing cards from all expansions – totaling only 96 occupations and improvements.  This is supposed to lead to better synergy between cards, fewer (if any) dud cards, and much less dilution – because not only will each card be better, you’ll see each one more often.  Advantage: for me, slight edge to Revised 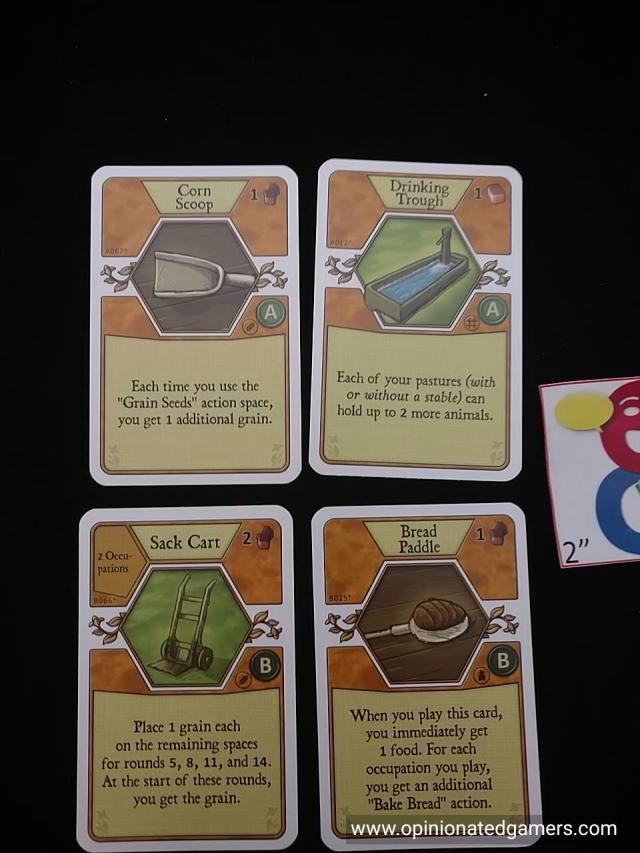 Some of the cards. They are split into “A” cards and “B” cards

All of the cards also have an indexing code in the top left. I suppose this will allow for easier duplicate tournament play in the future

Rules – The rulebook has been re-written for the revised version, as the original two-rulebook format was found to be confusing by many gamers. I find it hard to judge the rules because I’m obviously very comfortable with the game – I cannot really judge if the new rules are any easier to learn from.  After a careful examination of the rules, I can only find one rules difference/clarification in the Revised ruleset for a multiplayer game: when scoring points in endgame for major improvements, you must actually turn in the resources used to score so that you cannot also use them as a potential tiebreaker later.  Advantage: push

Family Game – In the original version, there was a recommended Family Game for novice players – essentially, you would not use any of the Occupation or Improvement cards in that version of the game.  There is not even mention of this in the Revised ruleset.  The designer has posted online though that there will be a new standalone version of a simpler game.  This Agricola – The Family Game “reduces the former family version to its key elements. Still, there won’t be any hand cards. Instead of placing fences, you will place pasture tiles, and instead of a complicated scoring procedure, everything on your farm will be worth 1 point each.”  As I only used the Family game in the original to teach newbies, I don’t miss this.  Advantage: Revised

Verbiage – some of the actions now have different English titles – Family Growth is now a Wish for Children.  I’m just used to the old terms, so sometimes when someone asks me a question about a Revised action, I kinda have to take a second and look at the board to figure out what they’re asking me about!  Advantage: push 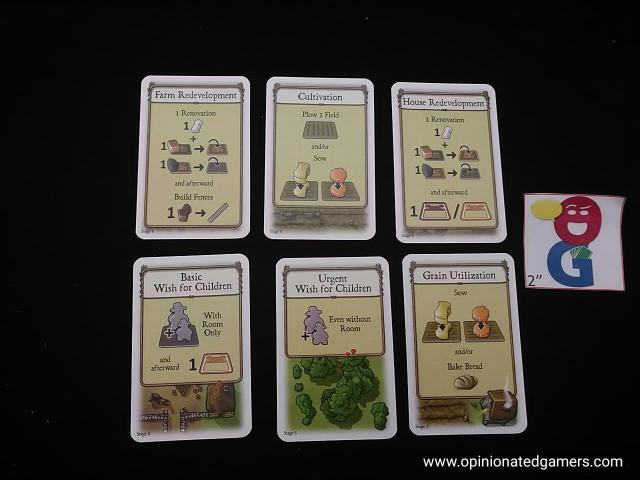 Some of the action cards with the new action titles

Components – the new version is fairly tricked out – you get meeples, animeeples, veggimeeples, resource-eeples, etc.  I have the very first edition, so my old set has cubes and discs.  Admittedly, the new set looks much better, but the traditionalist in me says that it was easier to stack the original non-sexy pieces in small spaces.  Advantage: Revised 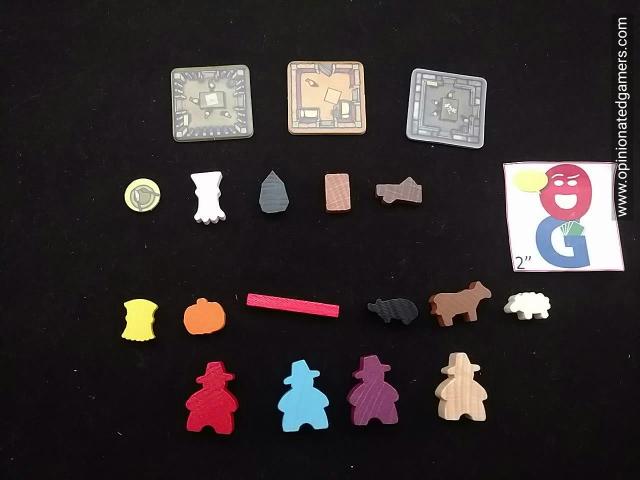 So – the question that everyone seems to be asking – which one should I get now?  Well, not to waffle, but it really depends.  Either way, whether you get the original version (Z-Man) or the revised (Mayfair), you’re going to get one of the best games ever invented.  Do you usually have 5 players?  Then maybe Z-Man is for you.  Do you want the newly curated decks for smoother play?  Then, Mayfair is for you…  Do you already have a lot of the older expansion decks?  Then maybe you’d rather stay with Z-man.  Are you a parakeet?  The new board and whatever-meeples do look really nice on the table with Mayfair’s version.

In the end, my recommendation now would be – if you don’t have a copy of Agricola yet, the new one seems to be the future of the game, and you’ll be able to get expansions for 5p and 6p in the future.  If you already have the first version, there probably isn’t enough to make me recommend that you also get the new version.  I suppose you could try to curate your own cardsets to mimic what you get in the new Mayfair edition.

Agricola has always been in my all-time top 5 games, and this new edition has caused me to break it out and get a few more plays in, and that’s a great thing!

Craig V:  I like Agricola well enough, but it’s never been a favorite game.  The cards were always the issue for me.  If they are just dealt out, it’s possible that one person ends up with fantastic combinations and others end up with absolutely nothing that works well together.  The solution is to draft them, but that takes time and isn’t really feasible for newer players that aren’t really familiar with the various options and strategies available in the game.  This revised edition of Agricola offers a great compromise in that the card deck has been curated to include the most liked cards from all of the expansion and fewer different cards overall.  Just dealing out the cards results in everybody getting mostly different cards, and also cards that will combo well together in some useful way.  This adds variety in that each player may have a different strategy based on the cards dealt, but it also evens out the game in that each player has more or less has a hand of equally powerful cards.  This is the biggest change in the revised edition and one that I highly welcome.  The rest of the game played and felt like the same Agricola that so many people already know and love.  If I were to add Agricola to my game collection, then it would definitely be this revised edition.