Essen Day Three: What’s Hot, and What I Played, Plus Other Updates (Chris Wray)

Day Three was the most crowded yet, as is seemingly always the case, because German families come out en masse to participate in the fair.  This posts covers three topics: (1) what’s hot, (2) scenes from the Messe, including another jumbo game, and (3) snap reviews of the games I played.  I cover five games today, including Colony, Dice Stars, Dixit: Revelations, H.M.S. Dolores, and Ominoes.

Here’s the Fairplay list of this afternoon, in the same order the games appear on the list: 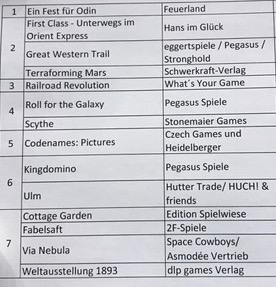 My advice? To tell what’s hot, look at where the overlap is between the Fairplay list and the BGG list.

Here’s my personal list based on my conversations and what I see people buying.  (Keep in mind that my list has a strong English-language bias, as I only get impressions from talking to gamers that speak English!)  The top 10 I’m seeing on the ground (in alphabetical order): 7 Wonders Duel Pantheon, Adrenaline, A Feast for Odin, Cottage Garden, Fabled Fruit, First Class, Great Western Trail, Inis, Power Grid: The Card Game, and Terraforming Mars.

I’m also seeing a lot of interest in The Colonists, Colony, Four Gods, Key to the City – London, Lorenzo il Magnifico, Oracle of Delphi, Scythe, and Ulm.  There are also a ton of people buying Codenames/Codenames: Pictures and Isle of Skye, showing the impact of the Spiel des Jahres awards.

Scenes from the Messe

Many of the big publishers have large demo areas which, in contrast with the walkways, can be spacious!

As I mentioned yesterday, some of the publishers have deluxe versions of games.  I didn’t see that many more today, although I did catch River Dragons in action.  You can actually buy this jumbo version at the fair: 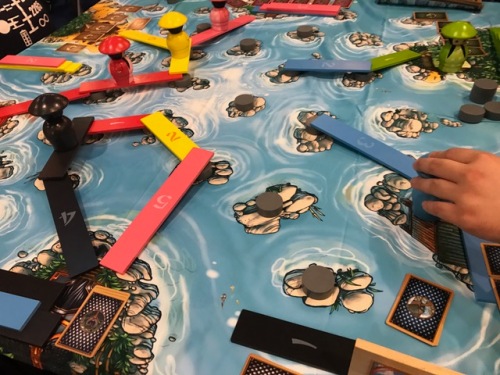 These are all based on one play, sometimes under less-than-ideal circumstances.  We at the Opinionated Gamers will likely follow up with full reviews, based on more plays at different player counts, in the coming weeks. 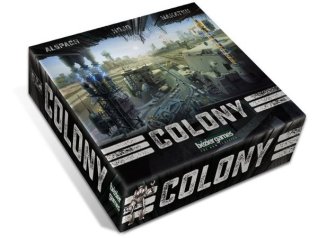 Colony is one of the standout games of the convention for me.  I played it today with a group of German gamers, and not only was I impressed, but they loved it too.

Colony is an engine-building game where dice act as the resources needed to buy buildings and earn victory points.  The game plays vaguely like Machi Koro — you’re building buildings based on dice rolls, and those buildings can help you on future dice rolls — but it is much more interactive, and there seems to be considerably more strategy involved here.  I think this will appeal heavily to gamers, especially those of us that love engine building games.

Then you take as many actions as you can.  Based on what buildings you have, you can convert dice into other dice, manipulate dice, attack, trade, buy buildings, etc.  Your goal is to build yourself a dice manipulation engine and get victory points, which are denoted by the yellow markers at the bottom of the cards.  The game ends as soon as a player hits the requisite number of victory points (and the number depends on the number of players).

There are two types of dice in the game: the white dice, which you can store in your warehouse from round to round if you don’t use them, and the grey dice, which only last this turn. 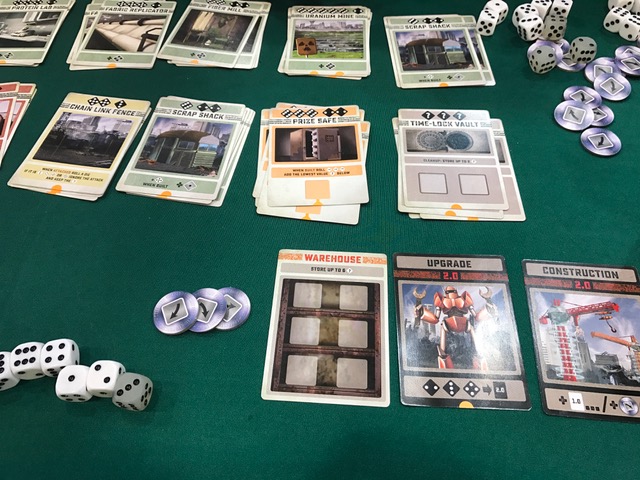 If you don’t build a building on your turn, you receive tokens, which you can later use to roll the grey dice for your turn.

I was really impressed by Colony, and as I mentioned above, it is one of the standout games of Essen 2016 to me.  I love engine building games, and this is one of the better ones I’ve played in a while.  There’s considerable depth here, and as I mentioned above, a high degree of replayability.  Four of us learned the game and played it in under an hour, meaning this will hit a nice spot in my game collection in terms of game length as well.

I played this over dinner last night with some friends from Kansas City.  I’m not normally a fan of abstract dice games, but I was intrigued because of who the designers are: Bruno Cathala and Ludovic Maublanc.

Each player takes a score sheet that looks like the one below.  There are 14 dice in the game, each with numbers and one or two stars.  Two dice come in black, three in purple, four in blue, and five in yellow.

On your turn, you add 1-3 dice from the bag to the dice pool, rolling the new dice.  You then use these dice, plus the dice that were passed to you, to score as many points as possible.  You take all of the dice with one characteristic (i.e. same number, all stars, or same color) and then fill out the score sheet.  You put the dice you used back in the bag, and pass the remaining dice to the next player.

Marking the score sheet is the only nuanced part of the game, and that’s where most of the small rules come in.  It’s also where all of the strategy comes in.  For each dice selected, you mark off squares equal to the number of dice less one.  In this last square, you put the total of the dice.  So hypothetically if you had three fives, you’d go X, X, 15 from the leftmost space in the “5” row on the scoring sheet.  In this regard, your score sheet keeps getting smaller and smaller.

If you use the stars instead of numbers/colors, you can mark off any spaces in the star rows.  If you have all of the stars marked off in the row, will double your total from your row.

That’s the game in a nutshell; there are some less important rules, but in the end, the that should give you a feel for gameplay.  Dice Stars reminds me a bit of Yahtzee mixed with Qwixx.

In the end, it was simple and fast, but it seemed a bit wonky for what it is.  The beauty of these types of games is their simplicity and how fast they play.  Dice Stars was almost simple, and almost fast, but not simple or fast enough to become a go-to dice game for me.  Nonetheless, I anticipate a lot of people will enjoy this, and I wouldn’t be opposed to playing it in the future.

My Initial OG Rating: Between “Neutral.” and “I like it.”

The new deck, Dixit: Revelations, adds nothing new to gameplay, so I won’t go over the Dixit rules here, but if you’d like an overview, check out my SdJ Re-Review from last year.

The new cards are stunningly beautiful, and I think this will become one of my favorite decks.  The trademark surrealism Dixit is known for is still present, but these cards have a level of detail unmatched by previous Dixit sets.  The scenery on these cards is gorgeous. 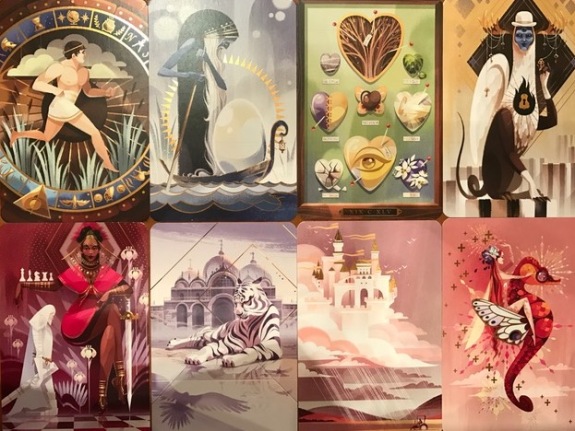 In an especially cool touch, for the first printing, Libellud included gold foil/embossing on over 20 cards.  So if there would be gold on the card, it instead has a true metallic, shiny look where the gold would be.  It makes the cards really pop.

If you like Dixit, this deck is quite different than the other ones already released, and I like it better than many of the decks available. 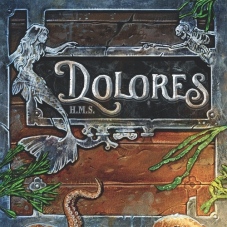 H.M.S. Delores is best described either as “Prisoner’s Dilemma: The Board Game” or “Rock, Paper, Scissors: The Board Game.”  Bruno Faidutti and Eric Lang have cleverly implemented the game’s central mechanic, and this has the chance to become a solid filler at my game nights.

Play proceeds left around the table.  One player takes the deck of cards and deals two to the player to his left and two to himself.  The players then negotiate before throwing (simultaneously) one of three different hand gestures.  A closed fist (i.e. rock) means “war.”  An open palm with fingers extended (i.e. kind of what you’d use to make a handshake) means “peace.”  A closed fist with a thumb up means “first pick.”

Thus, there will be one of five combinations that come up.

Collecting goods is the point of the game.  The goods cards (shown in the top row) come in several colors and values 1-3.

The game generally ends when the sun card — which is shuffled into the final 15 cards — comes up.  Your score at the end of the game is the total of goods you have the most points in and the goods you have the least goods in.  (Zeros don’t count as your least.)  If multiple sets of goods are tied for the highest or lowest total, then count them all.  If all sets of goods have the same total value, double your score.  It is a clever scoring system, and it adds greatly to how negotiations unfold.

There are also special action cards (“message cards”) that modify the rules slightly if you take them.  I won’t go over them here, but they do add some interesting decisions to gameplay.

I loved the game.  It implements the prisoner’s dilemma problem perfectly, and there’s more game here than you’d expect.  This is really all about negotiation: you need to recognize what your opponent has, what he needs, and then come to a compromise.  Blindly throwing out your hand won’t win you this game.

Given how quick this plays, and how much laugh-out-loud fun we had demoing it, I think quite a few groups will enjoy this.  I’m certainly bringing home a copy.

I had seen Ominoes on the GeekBuzz list, and an OG-er had mentioned it on our internal mailing list, so I decided to give it a play today.

Ominoes is an abstract dice placement strategy game that can be played in about 20 minutes.

Each player will represent a color.  On a player’s turn, he does three actions: 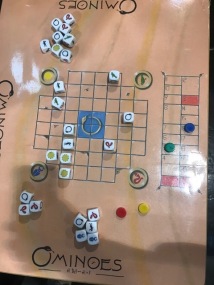 If dice are together in a group of four or more, you may score them, taking the points and removing those dice from the board.  The game ends when the players reach a predetermined point threshold.

I enjoyed my play of Ominoes, but this isn’t going to be a game I fall in love with.  There simply isn’t much strategy here, and most of the time, the decision to be made was obvious.  I normally don’t mind luck in short games, and this is indeed a short game (we played in about 15 minutes), yet the lack of interesting decisions made this feel longer than it was.

Every single move you need to break up your opponents’ planned scoring block and/or try to move your pieces into a scoring block.  There’s little point in trying to form more than one scoring block at once, because it’ll just get messed with, and you should score as quickly as possible for the same reason.  So this simply becomes a race of who can roll single dice into the desired pattern the fastest.  My opinion might change with more plays, but I just don’t see how the randomness in this game will appeal to many gamers.

5 Responses to Essen Day Three: What’s Hot, and What I Played, Plus Other Updates (Chris Wray)