A quick review of some of the titles that were available at TGM Dec 2017. I wasn’t able to attend but that didn’t stop me from coveting some of the games that would be sold there. I have managed to acquire a few of them and here are my impressions along with a quick summary of the games.

Era of Voyage the Dice Game . 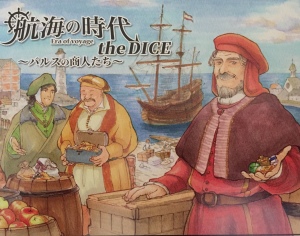 Era of Voyage (航海の時代) the original is a nifty rondel game. I’ve heard rumors it’s been picked up by another publisher. It’s successor the dice game is also a trading game but removes the rondel movement and replaces it with dice.
On a turn you roll 2 dice which are to be used independently to either gather resource or “invest” in an island which will allow you trade powers to use instead of gathering resources. Everyone starts with the same basic income card where a die roll may get you a resource, mone, or VP. There is a port which also has an income on it. There is no board but the main port and islands are represented by cards. 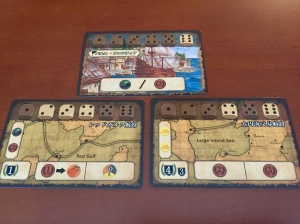 The dice limit your actions to the islands/cards with the same number of pips or the same basic resource actions dependent on roll. If you invest, you place one of your tokens on the island. If you have the most tokens on the island at the end of the game you will earn the island’s VP.
The game is triggered by using a number of VP from a shared pool based on player number. You also earn VP by having the most investments on islands.

This is a fun and fast filler and we’ve really enjoyed it. The are several island cards and 3 starting port cards which give a nice variety. The game can go very quickly or be more strategic dependent on how the rolls go. I like it, fast to set up, simple to teach, comes in a small box. Recommended and I would be at all surprised to see this game picked up by another publisher.

I am huge fan of games with polyominoes. I saw a picture of Copulas and had to have it.

Like Blokus, Copulas comes with nice translucent polyominoes in player colors but only “U” and “cross” shapes. Players use the pieces to cover up or capture Copulas, small cosmic lifeforms scattered in the night sky on the board. The Copulas are worth varying values.

The board is modular which adds nice variety. Players the must take turns playing their pieces and alternating shapes on each turn. Pieces played can not cover more than 9 points of Copulas and must touch previously played pieces. 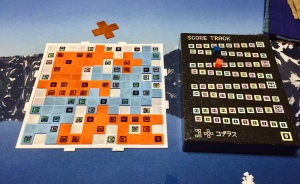 Endgame scoring is based on captured Copulas as well as scoring based on how their pieces are grouped or not. Bonus points are given if all of a player’s pieces are connected.

Players get negative points for isolated groups and individual pieces on the board.
The end game scoring provides lots of incentive for area competition and clever placement. The modular set up is always a plus for variety. It’s a fun fast game like others in this genre and it’s small size earn a place in my collection. (It easily fits inside the Blokus box )

Troika is the newest game from Oink Games. I love, the look of Oink games. Initial games from Oink were innovative and exciting. The last few have seemed less innovating and exciting but they still look good. Troika, the newest game is space themed. Troika comes in the nice small Oink box. The tiles might be a bit on the thin side but there are a lot tiles to fit in that small box! The game involves collecting gems but you also must refuel. Game play is a pretty simple game of drafting tiles and push your luck. On a turn you can “excavate” a face down tile or a face up tile. If it is face up it goes in your container face up in front or you or if face down it can be one of 3 tiles kept secret from other players (hand limit). Alternatively you can discard a tile from hand or container back to the excavation field and the tile maintains its face up or down orientation.

You must collect 3 tiles of the same number to be used as fuel,if you don’t have fuel you are stranded and take negative points. Runs of numbers on tiles in sets of 3 are considered gems and will score equal to the right most single digit of the set. That means if you have an 11 at the right most spot you would score 1. The round ends when some yells Troika (meaning you have a fuel set and more than 5 tiles in your container) at the end of their turn or if all the tiles in the excavation area aare face up. Points are awarded to the player with the highest score in the round. The game is played over 3 rounds.

So Troika makes a nice filler and it looks great next to all the other Oink games on the shelf… Being able to end the round early with a Troika adds a nice push your luck element to the tile draw. I think I would still rather play Deep Sea Adventure for push your luck fun. If I wanted something with some semblance of control via drafting, Troika might be a choice. The scoring is also clever were bigger numbers are better but not always…

Fool’s field is a nifty little 2 player game from Kuuri Keikaku (空理計画). The game consists of only 23 cards. The characters on the cards are nicely done. Each card has one of 3 symbols on the each of the 4 sides. They symbols are swords, shields and flowers. The goal of the game is to be the first to empty your hand of 6 cards after the draw deck has emptied.
Ona turn a player may “deploy” by playing a card into a 3×3 card grid.
The trick of course is that only 2 out the possible combinations of pairs of symbols on the edges of the cards can be played next to each other.
When one of the players  chooses or can no longer play they may “retreat”, picking up all the cards in the playing field and discarding down to 6. The other player fills their hand from the deck but gets to play first into the grid. 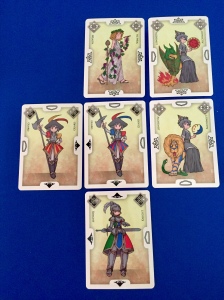 The game is deceptively simple but the distribution of card symbols amongst the cards make it quite a challenge. “Retreating” can be a great action but it allow your opponent to set the tone of the grid by playing first. I love little card games like this, portable with simple rules but a reasonable amount of tough decision making.