I don’t often play solo but I do love puzzles. I was pleased to find Hidden Rooms which has a fantastic look and lots of nice handmade touches. It seems to be a reimplementation of the designer’s print and play Kidnap Machine from a few years ago.

The game play is pretty simple. A random tile is drawn indicating which page of the monster manual to use. You are trying to move the child from the bottom right corner of the board to the upper left corner.

The child can only move orthogonally along already placed tiles. In order to move you draw room tiles randomly. You can succeed in your movement if the new tile has the same number or higher or if the tile is the same color.

After the child’s turn the monster moves twice along it’s set path. The monster of course has it’s big eye out for the child and if the child is within it’s vision the monster will veer from it’s path and chase the child.

Sounds easy right? well it’s more challenging than it looks and trying to find a safe path and play the odds makes a great puzzle. The wonderful production makes the game even more pleasurable to play. It’s quick but addicting.

Saashi and Saashi continue with the coffee theme they started with Coffee Roaster in ブレンドコーヒーラボ (Blend Coffee Lab.). Coffee Lab is a trick taking game that incorporates winning a trick with being able to select one or two of the cards from the trick for scoring. 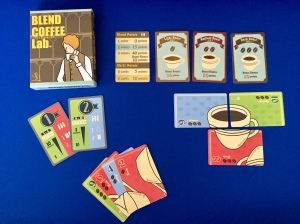 The game is playable with 2-4 players but like with most trick takers the 2 player version seems less interesting so far. What makes BCL different from most standard trick taking games is as follows.

First following “suit” in BCL means you must if possible play a different color card than the ones previously played.

There is a “trend” which is determined at the beginning of the hand from the previous trick. It determines whether high cards or low cards will win “priority.”

Priority allows a players to choose one or possibly two cards from the trick to use in scoring. The last unpicked card determines the trend for the next hand.Winner starts the next trick like usual.

Players are collecting cards of 3 “roast” levels to make cups of coffee. A cup consists of one each of available color cards of the same roast level.

It took me a few plays to see how best to try and play BCL. Winning tricks is obviously great but trying to figure out how to play your hand isn’t always easy. Trying to control the trend I think is important so deciding whether when to try and win a hand vs throwing out a card that may go unpicked to change the trend more favorably is key.  If you like trick taking games BCL is worth a try.

One of my favorite games to come from TGM in recent years is The King of Frontier which is a delightful mash up of role selection and tile placement. I was really excited to see they had a new game this year, Little Town Builders but a little apprehensive because sometimes the follow ups just don’t quite meet expectations.

Little Town Builders manages quit nicely in being a great follow up game. I’d call it a mash up of worker placement and tile placement. It comes with a double sided board for variety which is really nice. There are preprinted resource areas on the map which is made on a large grid. Each player gets a set of workers and a set of buildings. The game also comes with building tiles reminiscent of King of Frontier, wheat fields and a set of goal tiles (Japanese text, English paste ups made the game easier for us). Each player also gets a hand of random goal tiles.

Players can place their worker on any open space on the board and activate the surrounding tiles directly orthogonal and diagonal. If the tile has a tree or mountain you collect wood or stone. If there is a pond you collect fish. If there is a building and you own it you may use its ability. If your opponent owns the building you can pay them 1 coin to use it.

You can build a building if you have the resources for it by placing your worker on a building area. In addition to abilities buildings are also worth points.

At any time if you meet one of your goals you may show the goal and collect the points.

At the end of the round after everyone’s workers have been played, you must feed you workers with either 1 fish or 1 wheat.  Hungry workers loose points.

The game last only 4 rounds and the player with the most points wins.

Are you ready to rumble? Desktop Hebocon Battle will definitely not prepare you for the sumo ring or any other combat but it’s one of the coolest games I’ve played in a while. The game is themed around the real life Hebocon: The best worst robot competition. It is strictly for the technically challenged nonprofessional.

The goal of the game is to create and program your robot to do battle in the ring but not do it too well.

There are 2 phases. The first is making your robot. Your robot will consist of differently shaped polyominoes with various programmed movements or actions. You take turns collect programming pieces to eventually place on your player board similarly to other polyomino type games. 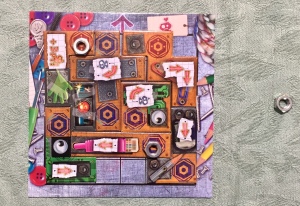 Once everyone has collected their parts, the simultaneous building occurs. The first player to complete their board starts a timer included in the game and the rest of the players have 1 minute to finish. Players earn points equal to the number of spaces on their board covered but if you manage to cover all the spaces you get a high tech penalty of minus 8 points!

The second part of the game involves the battle. Players now take turns activating the polyominoes one at a time and move their robot or their board accordingly. The board has bonus chips for points and well as penalty spots. The big goal is to eliminate your opponents. If you push your opponent out of the ring you gain points and they lose points. The game ends once all players have used all their programming pieces (you must use all your pieces even if you don’t want to!) or if there is only one robot left standing in the ring. Bonus points for anyone still in the ring.

Way back in the day when I first got into the hobby, RoboRally was a huge hit for us with its silly random and chaotic movement and cute little robots. I tired of it since most games went on too long. Desktop Hebocon provides the same fun in a much more streamlined manner with a fixed game end. It’s really challenging to get much accomplished with your robot but it fits the theme perfectly. I’m sure some people will be able to see ahead and create and program their robots well (although maybe we should handicap them since it is a Hebocon) but for the rest of us it’s lots of laughs and groaning. The sumo battle is great and I feel like there should be side betting! I’m normally not into direct confrontation but in this case it’s all in good fun. Love it and looking forward to more plays.