Steam Rollers was a new release at Essen 2015, though in small quantities.  We initially reviewed the game back then. It has received new life with a reprint from Stronghold Games – I was given a copy of the new version to try out.  The rules are essentially the same. In the game, players work to become the best railroad tycoon by building a network of track and delivering goods.

Each player is given a board and a pen.  The map consists of 6 different colored regions, each with a city (hex shaped and denoted as a die number) as well as a town (a thick black dot). 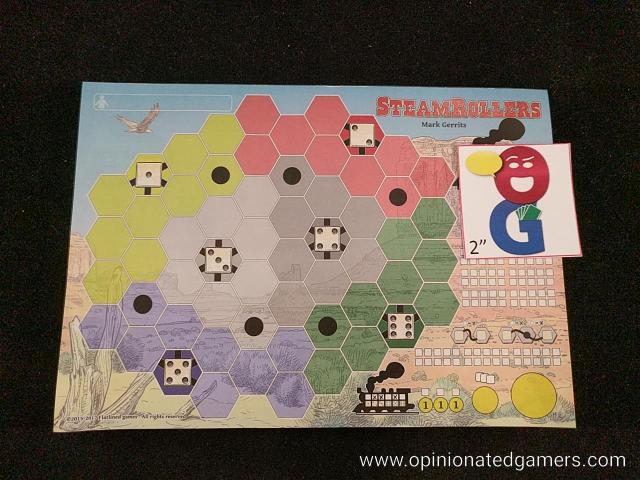 There is a supply board which is placed in the center of the board – this board has 6 hex shaped cities on it, each of these gets (N+2) cubes randomly placed on it, though any cubes which match the color of the city are simply removed and placed back in the bag.  There are six double sided special action cards – the side of the cards are randomly chosen, and this sets the 6 particular actions that will be available in this game.

In each round, the start player begins by rolling the dice – 1 black die, and (N+1) white dice.  The black die is placed on its matching spot on the central supply board. Then the start player chooses any one of the available white dice and performs an action with that die.  Play rotates around the board with each player taking a single die and doing an action with it.

Build track – the number of the chosen white die tells you which region on your board that you draw track while the black die tells you which types of track you can draw.  Each hex can only ever be built in once – so there are no crossings/junctions in your network. You do not need to draw into a city though – just touching the edge of the city hex brings the track into the city.  The towns, however, need to have a track drawn thru them in order to be connected.

Improve Engine – You cross out a box on your engine row equal to the number on the white die that you chose.  The total number of crosses in this row tells you how strong your engine is. The boxes do not need to be crossed out in any particular order.

Deliver Cargo – The number on the chosen white die tells you the source city of your delivery.  You choose any cube in that city and then deliver it to the city of matching color on your board.  You must be able to traverse a contiguous track to that city. The delivery distance equals the number of different colored cities and towns between the origin and the matching color destination.  You will score one point equal to the total distance. However, you must obey your engine strength – you may not make a delivery that is greater than your current Engine strength.

Take a Special Card – As long as it is available (not turned sideways), you can take the special card matching the number on your chosen die.  If you take a card, you put it in front of you and turn it sideways. It remains on its side until you next draft a card. In this way, you are guaranteed to be able to use it at least once before someone else can steal it.  Some of the cards are one-time-use only while others can be used round after round until someone takes it away from you. The special cards may allow you to change the value of your dice, alter the die choice of other players, change your delivery, etc.  Again, there are 6 different cards, and you randomly choose which side to play in each game leading to a different combination of cards.

After all players have taken a turn, the start player marker is passed and another round commences.  However, if three of the cities on the main board are empty of cubes, the game instead moves to final scoring.  Players keep all their points from deliveries during the game. They also score one point for each completed connection between two cities as well as one point for each town in that connection.  1/2/3 bonus points are given for train strength of 4/5/6. Finally, some of the special cards give positive or negative points if you are holding them at the end of the game. The highest point total wins.  Ties go to the player with the strongest engine.

When the first version came out, I felt it was a shame that the game only got a limited release due to some financial issues at Flatlined Games.  That being said, I’m quite happy to see the game get a new life with this release. The new Stronghold version is essentially identical other than having a larger box and English only rules.

The game should feel familiar to anyone who has played Age of Steam / Steam / Railways of the World in the past.  You get a map, try to link up cities, and then you deliver goods (colored cubes) to a city of matching color on the board.

One of the  big differences from the full boardgame is that each player has an individual map of tracks (while sharing a common map with goods locations).  This causes a number of different strategic considerations. First, all players have equal access to the different cities on the board – which is very UNLIKE Age of Steam where some cleverly played links could allow a player to monopolize a section of the track.  Second, as players can have different connections between the cities and towns, you really have to move fast on particular cubes. It’s impossible to play defensively against three different opponents, especially when not everyone shares the same map of tracks!

Your decision tree on any given turn will often depend on where you are in turn order. If you are first or second in order, you should be able to take just about any action you want as the dice will generally allow it. However, if you are last in turn order, your turn may just be about making lemonade out of the dice left to you at the end of the round.

I suppose that there is a chance to play defensively and to try to deny certain dice to your opponents (which means that you would then have to take that die yourself) – but this really only makes sense if you needed that particular action in the first place because you have otherwise cost yourself out of a useful action. I also find it harder to play defensively because I don’t have enough concentration (or desire to spend ten minutes on each turn) examining the boards of all of my opponents – I prefer just to take the best move for me and let everything else figure itself out…

At first I was not thrilled about the special action cards (being an Age of Steam purist), but I have found that they add a nice twist to the game – no different than playing a different AoS expansion board to get a different feel with a few rules tweaks. While you can specifically choose which side of the card you want in the game, we usually just flip a coin to randomly decide. There are some which are stronger than others – but as they are available to all players, I don’t find that the stronger actions are unbalancing. Taking a special action card uses up your entire action for a turn anyways, so you really would like to get some benefit out of the card at that cost!

SteamRollers gives you the feel of Age of Steam in a more compressed version. Games will likely take about 30 minutes once people are familiar with the rules. Sure, it’s not as complex, and you don’t have to do any of the mathy income/expenditure calculations – but you still get all the joy out of building your network and racing to deliver the different cubes.

TL;DR. I love it. It’s the Age of Steam: the Dice Game that I’ve always wanted.

Dan Blum (3? plays): I’m not a huge Age of Steam fan, but on the other hand I do like a number of pickup-and-deliver games. So I want to like this, and while it does borrow my least-favorite aspect of AoS, namely the reliance on convoluted routes to score well, the routes are much less silly here than in the original. Unfortunately I really don’t like the way the game is implemented. The bulk of your points necessarily come from delivering cubes. There are not that many cubes available so it is crucial to know exactly which cubes other players are able to deliver and how close they are to being able to deliver others. In AoS all of this information is on the central board so it’s easy to see. Here everyone’s track (and engine level) is on their individual boards and is not easy to see. Having to constantly peer at everyone’s board is a pain and makes the game take longer than it should. ETA: Stronghold had an opportunity to ameliorate this in their new edition by making the individual boards larger – having to look around the table at all the boards would still be annoying but it would be easier. However, they made the box much larger while keeping the boards the same size as far as I can tell.

Joe Huber (10 plays): I really enjoyed Steamrollers when it came out; it offered an Age of Steam-like game better connected to my preferences.  But – unlike Canal Mania, Steamrollers hasn’t gotten better for me with additional play. Not significantly worse, either, but – as I think about it, in reflecting for this article, it feels more like a game I’m happy to play than one I need in my collection.