So, where did I leave off.  Ahh, yes. Last I wrote we were all facing imminent extinction and my group had sloughed off to hide on Yucata and wait it out. In desperation for gaming newness, we might have inadvertently spent what may have been endtime gaming days (with the countdown clock ticking) on some of its, shall we say, less stellar attractions.

(With the normal caveats that we always enjoy everything we play and that everyone in our gaming community is very grateful for the volunteers who develop these games, which have allowed a semblance of social normality in our lives over the last year. Thank you.)

Anyway, keeping that in mind, let’s get this motley crew out of the way in this instalment (perhaps one may think of it as a collated collection of games to be wary of, if one wishes) in preparation for upcoming goodness in later editions.

Abstract game of playing out coloured stones on matching coloured spots, chaining out from a start point. Each stone get points equal to the level you place at, but the placement rules force you to start at the lowest possible level in any of your colours. A turn therefore is to seek out the best step-laddering-up chain you can find in the colours you’ve got. Cards that allow you to break the placement rules increase the AP, and VP bonus cards occasionally give you a boost to shoot for. Turns can be longish unfortunately while you process all the options, and there’s not much that’s clever or interesting about searching that decision tree. It was ok, but nothing I need to play again.

Another version of that game where you move an alien to an adjoining room to try and eat an opponent’s dude, expand the station by a tile (which may have a new alien on it), and then move your pieces around to safe places trying to either smack aliens or reach escape pods for points. There’s more control with 2 players but less alien interest (because you have more control over their movements), and add increasing alien chaos with each extra player. In fact, 4 players is just a chaotic pointless mess. There’s nothing too clever to do so you’re playing for the theme and the multi-player chaos, which makes it simply ok for the occasional play.

A worker placement where everyone wants the same spaces (get resources, buy production cards, generate goods) at the start of the game, and everyone wants a different collection of spaces (to transfer goods into points) in the back half of the game. With so few action spaces, everyone takes turns at getting screwed. You do get bonus actions to buy stuff from out of the action slots that others are expecting to buy, so that increases the screwage, and also advantages the start player(s) even further. With no divergent strategies possible, no special effects, and everyone competing for the same actions, there’s not a lot of room for cleverness.

You’re just collecting cards to match the state symbol, or the faction symbol, and hoping you draw into good and useful events (the third type of usage) – which thankfully allows the theming to be totally ignored. Play the cards to establish either a yes/no position in the current symbol up for election, or advance on a track to earn a token in a symbol which (if you have the most of it) will earn VPs at the end of the game. The challenge is to be efficient with your cards, getting on the right side of each vote, whilst getting lucky by falling into good event cards at good times. The card effects (which can be played multiple times due to the small deck, so you can search for them and allow for them) provide enough interest to generate replay, despite the abstractedness guaranteeing it won’t see lots of replay.

Fast game of using your 2 actions to play navigation cards to land on one of the 8 planet tiles (ie match the numbers required) and to claim score cards off the planets before someone else gets the ones you want. Some nav cards also have special actions to juice things up. The scoring cards remind me of It’s Mine … lots of different ways to score, be it sets or matches or lots of one type or straight VPs. With only 2 actions, turns move fast, especially as the only things you’re doing are working out the best way to move and the best way to claim the cards you want. Your strategy is to work out what types of score cards others are claiming and go different … and/or hinder them. It’s pleasant enough, but very light. 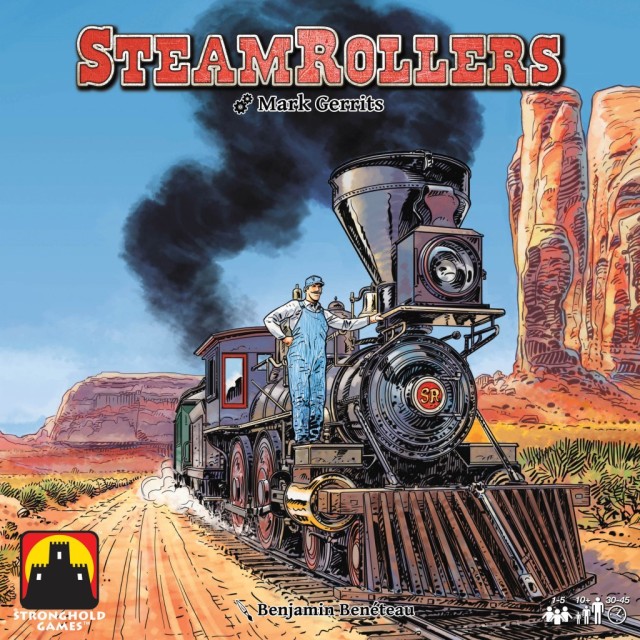 This does a fairly good job at distilling Age of Steam down to a 30 minute roll and write. Each turn you choose a die that you use to either build track in the die’s region (between cities on your personal board), increase your engine size (ie how many towns/cities you can move a cube), move a cube to the city matching its colour, or choosing an action tile for future advantage. The cubes on the cities are common to all players, so there’s some race tension in the building and moving of cubes before others get to it, which is what AoS is all about after all, but the game increases the luck factor (it’s roll and write after all). There’s otherwise not too much to think about, but it rolls along pleasantly and fulfils its purpose.

We reviewed this a few years ago here

Look at your cards, bet on what’s going to win before you start, then play out your cards (in turn order) to advance the cars. See who successfully bid on the leading cars once the race is done! Reminiscent of Galloping Pigs, but simpler. Too simple in fact, but quick at least.

Robo Rally in a pick-up-and delivery vein, but only being able to change 1 order each turn, with the other 5 unchanged but still processed each turn, makes for a weird and slightly unsatisfying experience, especially when robot interactions throw in enough randomness to make planning occasionally futile. At least it goes with sequential turns rather than simultaneous turns to allow you time to plan and recover a little.

An earlier (much more positive) review can be read here…

Tery N.  I really enjoy Steamrollers; when it was first taught to me I thought it sounded rather boring, but a few turns in I began to appreciate just how clever and well-thought out it is. The balance of building the perfect rail route versus delivering the cubes before your opponents decide to creates good tension and adds a level of strategy that isn’t always present in roll and writes. It also works well at all player counts.