The Crew: The Quest for Planet Nine was the first game in this series, arriving in my game room after SPIEL 2019.  We got the game at SPIEL, only in German, and we muddled through the game, playing mission after mission.  It combined two popular game genres – cooperative games and trick taking card games – in a way that hadn’t really been seen before.  The original was given the 2020 Kennerspiel des Jahres award.

As OG writer Chris Wray once described (and copied at least one other time in our full Die Crew review): “Die Crew is a cooperative trick-taking game with 50 different missions. In many ways, it is a standard trick taking game: players must follow suit, there are trump cards (which can only be played if you can’t follow suit), and the highest value of suit led wins unless there is a trump card.  Players are trying to complete the mission, and there are 50 missions in the campaign. A mission usually has a number of jobs to complete, and a job is represented by a small card that a player has in front of them. The player with that card has to capture the trick in which the matching big card is played. So if you have the small green 5 in front of you, you have to capture the trick in which the big blue 3 is played. Sometimes jobs need to be completed in order (and there are tokens to track that). Additional restrictions can be added to a mission, such as “one trick must be won with a 1-value card” and “no trick can be won with a 9.”

The 50 missions were of varying difficulty, and I believe that I’ve managed to win all 50 missions at least once, but I have not managed to win them all with the same group…  While I really liked the game, it did seem to be best with 4 players.  Many of the missions were quite easy with only 3 players, and many if not all of them were impossible with 5 players.   The gamers in my local group got to the point where they would only play the game when we had exactly 4.  Not a deal breaker, but definitely makes it harder to get a great game to the table when it doesn’t scale as well as you’d like.

So, it was with some trepidation and excitement that we turned to the second game in the series, Mission Deep Sea.  From reading online stuff, it seems that the base gameplay is mostly unchanged – the big difference here is in the task cards.

The task deck is now much larger — 96 cards vs 36 cards in the original— and each card has a difficulty level on the back based on whether you’re playing with three, four, or five players. A mission will have a difficulty level (along with other possible wrinkles), and you draw and reveal task cards until their sum equals that difficulty level, with you skipping any cards that would make the level too high.   The task cards are also different in the sense that they do not usually specify a particular card but rather a more general rule – such as “I will win the first 2 tricks” or “I will win all the cards in at least one of the 4 colors”.  Players still have to choose specific task cards, but the team often has a bit more to work with in order to try to have each player accomplish their designated task.

One nice change here (for me) is due to the variable number of task cards.  It is quite possible, well, at least early on, for the group to have fewer task cards than the number of players.  When this happens, the captain (and possibly succeeding players in order) can pass on taking a task card.  The cards must still be allocated to all the players – but as long as there are enough players to accept the cards, the earlier players can pass.  This is an improvement for me as sometimes the captain gets a hand that he cannot complete a task card with – and he oftentimes was forced to take a card, and you knew you were screwed from the start.  Now, that doesn’t have to happen…

Additionally, and perhaps more importantly, there is a sense of scaling to the task cards now.  The reverse side of each card has a set of difficulty ratings – based on player count. Each mission now specifies a total difficulty number, and you draw cards from the deck until their sum (based on player count) equals that for the mission.   As each task card has an appropriate difficulty rating based on the number of players, you’re more certain to have an appropriate and consistent level of challenge for your game.  Sure, there are a couple cards I feel that I would have rated differently – but overall, this is a huge improvement to the original game. 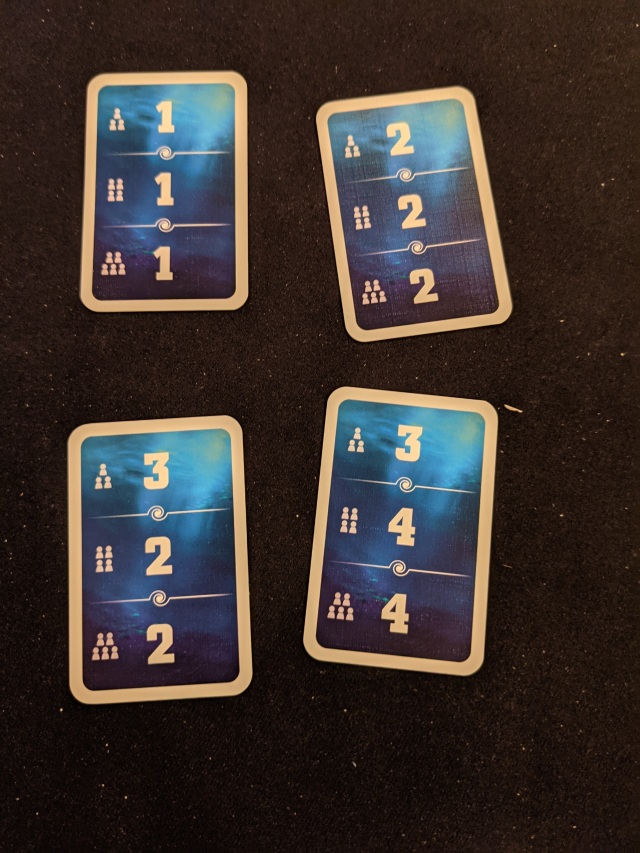 In some sense, I almost wonder whether the booklet is as necessary – in this newer version of the game, most of the variability comes from the cards and the random draw from that deck. Sure, having different communication rules at times or having to stick all the goal cards on a single player change things up a bit – but honestly, once we have gotten thru the book, I can see our group settling on a difficulty level that we like, and simply drawing random cards until we hit the number and then playing.

Thus far, we have played a few sessions with the EN version (after a few somewhat awkward online plays of a DE version and somewhat suspect self-translating), and I must say that I’m pretty enamored with the game.  As it stands now, this is our go-to opener/filler, and we’re going to try to play a few missions each game session, with the hopes of getting through the whole book by the end of the fall.  All four of us in our regular game group adore trick taking games, so this is right up our alley.  I think it has been really interesting thus far watching how each of us picks up the strategy for a particular mission at different times.  I have been guilty most often of not figuring it out, and then I get menacing stares from everyone else when I make a dumb lead….

Would I say that this new version fires the original?  Yeah, pretty much.  The fact that this plays just as well with three and five players makes it superior to Die Crew – which was great for 4, but not so hot with any other player count.  That’s a bold statement to say that this game supersedes a recent Kennerspiel winner, but that’s my opinion, and I’m sticking to it.

James Nathan: It is simply astonishing.  What I didn’t realize before, was how much of the joy of Die Crew: Outer Space came from the mission book additions rather than the task cards.  The game shined because of those missions where the book would tell everybody to win one 9 each, or whatever, and sort of didn’t sweat the normal tasks too much.

Now, Sing has found a way to incorporate those sort of twists and shenanigans into every game.  Just brilliant. It feels less like a sequel and more like a further developed version of the original.

The passing of taking a task is also a delight. It shines even further, as, being a cooperative game, you don’t necessarily just want to pass because you don’t feel confident in doing a task, but if it’s…somewhat plausible, maybe you take it so as to not burden your teammate with a task they certainly can’t do. It’s a treat when it bails you out of a preposterously unfortunate deal, and a nice decision point when maaaabye you can do it.

Dan: I agree, this is a lot more interesting than the original. I have played the earlier missions of the original and the final dozen or so, but not most of the ones in the middle because honestly I started getting bored after a few hands. I don’t want to play marathon sessions of the new one but it definitely holds my interest longer and I would like to play it more.