Headin’ Back Down Thunder Road

Ways that we know that I am officially old:

Ah, yes, Car Wars – originally packaged in a ziplock baggie in 1981 and featuring vehicular combat in the Mad Max/Road Warrior vein. Let’s be clear – while the game system spawned a BUNCH of expansions and multiple editions, I always found it to be similar in enjoyment to Star Fleet Battles. In other words, it was more fun to design the cars (or spaceship) than it was to play the game.

But the idea of vehicular combat is pretty appealing to a kid who grew crashing Hot Wheels cars into each other… so when Games Workshop published the massive coffin-sized box of Dark Future in 1988, I plunked down a substantial amount of hard-earned cash to acquire it. Once again, the idea of the game was more fun than playing it… as was retrofitting Matchbox vehicles with guns & such.

thunder road… lying out there like a killer in the sun

It was sometime in the mid ‘90s when I found a copy of Thunder Road in a thrift store and picked it up… and I was blown away to realize that I’d been missing out on the distilled gaming goodness of this Mad Max-ish silliness for more than a decade. (The game was originally released in 1986.)

Honestly, Thunder Road was caught in the same trap as a number of really solid mass market designs (Fireball Island, Screamin’ Eagles, Dark Tower, Daytona 500) in that time period – I was a “Serious Gamer” who spent my money & time on MB Gamemaster, Games Workshop, and Avalon Hill… with no time for “mass market games for kids”. (Ah,overweening pride.) So, it took me a long time to get to the ‘hidden’ good stuff.

Now, let me be clear – Thunder Road wasn’t perfect. With streaky dice rolls, it can run overly long… or be over much too quickly. The power of the big vehicles (armor level 6) is such that once you get them up on the road, they’re pretty much nightmares unless someone’s copter can pick them off.

And I wasn’t the only person who (a) loved the game, and (b) thought it could use a re-boot. As proof, I submit to you this Twitter thread from 2012 between myself and Brett Myers (fellow Gathering of Friends attendee and all-around nice guy): 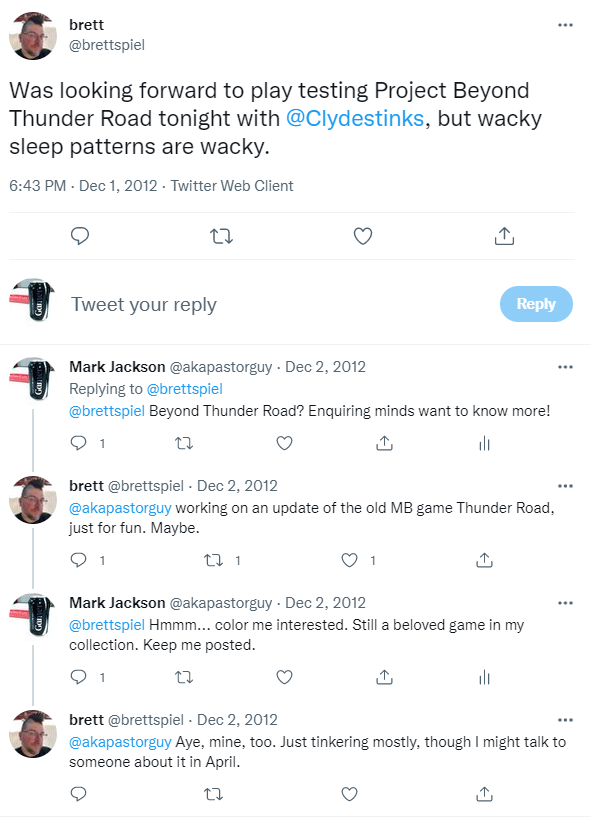 And a few days later… 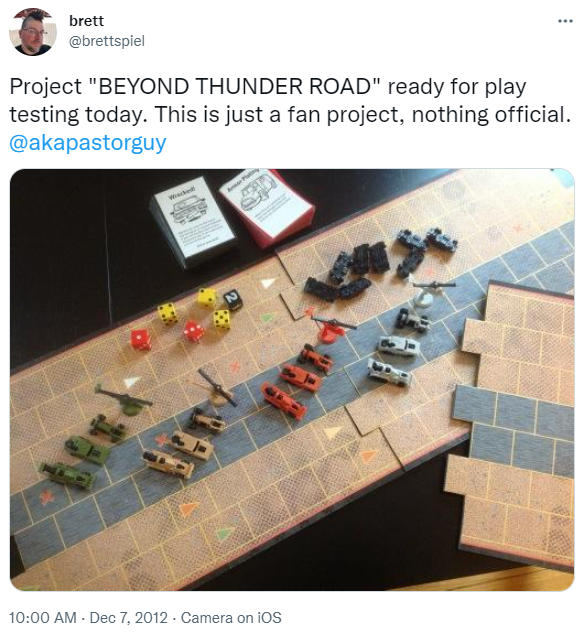 Fast forward a number of years, and Brett (and his partner-in-potential-vehicular-mayhem, Dave Chalker) managed to get their design in front of the good folks at Restoration Games – whose mission in life is to take older classic names and make them “as good as you remember them.” (Note: I, the author of this post, am not simply a fan of Restoration Games – I’m also a playtester for their Unmatched series… and I’ve written a number of nice things about them over the years – so it’s possible I’m a bit biased. Just thought you should know.)

When I was on the Restoration Games Zoom call for game journalists (yes, Virginia, evidently I’m a game journalist now) in July 2021, I was deliriously ecstatic to hear the news that Restoration Games was restoring Thunder Road – and even more excited that it was Brett’s “fan project” that was the base for this wonderful news. (You can read my recap of the call, including my serious fan-boying over Thunder Road, right here.)

The result is Thunder Road: Vendetta… which re-launched on Kickstarter yesterday and which (no surprise) I backed so quickly my computer mouse left burnout skid marks on the table. (Evidently I’m not alone – as of early this morning it was already funded at over $425,000!)

While I haven’t had the privilege of playing the new version (yet!), I have taken a deep dive into the rulebooks of the base game and the expansions – and, coupled with my experience over the years with the original Thunder Road, I have thoughts.

Here’s my conclusion – the team of folks behind this re-boot of Thunder Road managed to keep the basic premise of the game intact while making it new, fresh, and much more dynamic. Your mileage (get it, a car joke?!) may vary – especially if someone slams you off the board.

One of the privileges of knowing Brett for so long (we’re old, dude) is being able to ask him a couple of questions about Thunder Road Vendetta to share with y’all, our faithful readers.

First, I wanted to know what part of the original game did he not want to lose as you played with plussing/re-designing it?

Brett: In my earliest drafts of the game, I was hesitant to touch the core mechanics and mainly added layers on top; upgrade cards, a damage deck, variant boards, and obstacle tokens. Once Dave and I got the gig, Rob [Daviau] gave us the freedom to really tear it down and rebuild from the ground up. We identified a few essential elements that we felt were key to the identity of the game, though; rolling dice for movement, the switch & link board sections, a team of three cars for each player and, of course, helicopters! As you’ll see, we retooled all of these components into something modern and very cinematic in feel. We took a lot of inspiration from Mad Max: Fury Road. This game is one jaw-dropping, action-filled chase sequence from beginning to end!

Then I asked what new element he is most excited about? (I also commented that Rob seemed to be very into fire & ramps in his Tweets, which ought to concern anyone driving with him.)

Brett: Ok, the fire rules and ramps are both awesome and I’m super excited by them, too! But, let’s talk about a thing we changed in the core mechanics that makes it really shine: the dashboard dice allocation system. In the original game, you rolled what you rolled and, well, rolled with it. If you rolled a bunch of low numbers you fell behind and it was hard to catch up. We’ve given players just one extra die to roll and that has made a huge difference in game play. You still assign one die to each car, but the fourth die can be assigned to an action space that helps to mitigate poor rolls or allows cool maneuvers when driving, that sort of thing. And just like the original game, even if one or two of your cars are wrecked or destroyed, you still roll all your dice and choose which to assign!

And Brett add this postscript (which I love):

hey, I know it’s late, we can make it if we run

If you’d like to get in on the Kickstarter – or if you’re just interested in seeing what in the world I’m going on and on about – check it out at Thunder Road: Vendetta. The Kickstarter closes on Valentine’s Day… so, if you’re really desperate for something to get your significant other, this is at least one idea to consider. (Surgeon General’s warning: not recommended for significant others who dislike board games and/or were expecting something a tad more romantic.)

Note: there is not (somewhat obviously) a solo mode for this game – which makes sense when you work your way through the rules. As I’m kind of the go-to solo gaming guy for the Opinionated Gamers, I’ll point out that there is an upcoming vehicular mayhem solo game coming from the folks at Renegade Games Studio called Wreckland Run… and I’ll be writing about it in February.

In case you were wondering, all of the section titles are borrowed from the Bruce Springsteen classic, “Thunder Road” (which is a much better rock’n’roll song than Tina Turner’s “We Don’t Need Another Hero” from Mad Max: Beyond Thunderdome). Yes, liking this song is yet more evidence that I’m getting old.

follower of Jesus, husband, father, pastor, boardgamer, writer, Legomaniac, Disneyphile, voted most likely to have the same Christmas wish list at age 57 as he did at age 7
View all posts by Mark "Fluff Daddy" Jackson →
This entry was posted in Preview and tagged Kickstarter, Restoration Games, Thunder Road. Bookmark the permalink.

6 Responses to Headin’ Back Down Thunder Road