Raven, a trick taking card designed by Bob Kamp and available on Drive Thru Cards, is at first glance vaguely similar to David Parlett’s Ninety Nine.  But once you get past the bidding system, this becomes a clever design all its own, complete with specialist cards and a scoring system that ramps up the tension.

I was approached by the designer about doing a review of the game, and given my love of the trick taking genre, I agreed to do so.  My group and I have played at several different player counts since, and it has been a hit with us.  This is a clever, well-designed trick taking game, and I enthusiastically recommend it.

Note: The first part of the review focuses on the standard rules for 4-6 players.  The 2- and 3-player rules, as well a a short game variant, are described in a separate section below.

Raven is played with 56 suited cards.  The four suits — Shields, Swords, Axes, and Waters — have cards ranging from 1 (low) to 14 (high).  Additionally, there are four specialists in the game: the Raven (the highest trump); the Wolf (the highest non-trump); the Shaman (a half-step higher than the card it immediately follows); and the Dwarf (the lowest card). 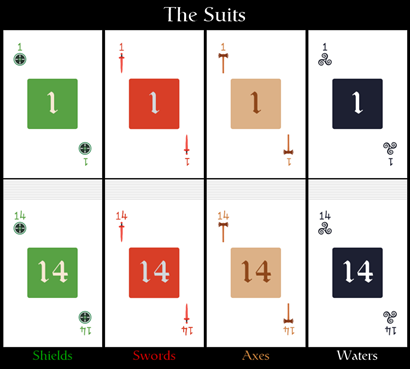 The cards are dealt out evenly, and the game will consist of eight hands, with the highest score at the end of eight hands being the winner.  The trump rotates each hand (shields, swords, axes, waters, waters, axes, swords, shields).

Like in Ninety Nine, players bid on how many tricks they will take by using cards from their hand.  (Three cards are used in lower player counts; two cards are used with 5-6 players.)  The value of the cards doesn’t matter for bidding, only the suit does: a shield bets 0 tricks; a sword, 1 trick; an axe, 2 tricks; and a waters card, 3 tricks. 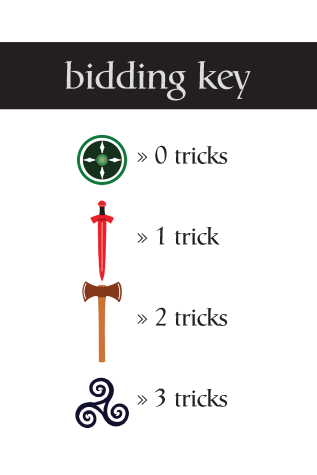 Play then continues like would happen in a standard trick taking card game: 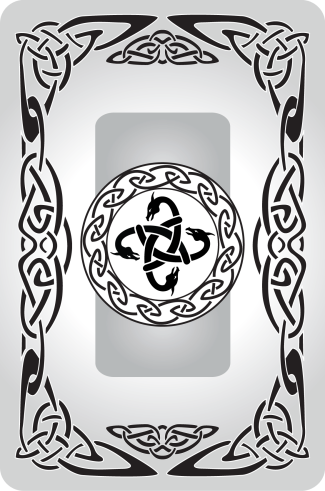 The back of the cards.

The Short Game, Plus 2- and 3-Player Rules

The rules also contain a variant for a shorter game and rules for 2-3 players.

In the shorter game, there are only 5 hands, the first four listed above, followed by a “ravenclaw round” in which the only trump is the Raven.

In the 2-player game, the 1s, 2s, and 3s are removed, and three hands are dealt, but the third hand may not be swapped.  There are no revealed bids.  Exact bids are worth 6 points.

Raven is a great trick taking card game, and we’ve loved our plays.  This takes the best part of Ninety Nine — the bidding system — and ramps up the tension through use of four Tichu-esque specialist cards and a more equitable scoring system.  To me, Raven is a clever design that stands out in a crowded genre.

Raven presents tough choices before the hand is even played: you’re often forced to give up good cards to get the bid you want.  And from there, the game gets even more interesting: each trick subtly reveals the bets made by other players.

The specialist cards really make the game.  Not only do they factor into how many tricks you can expect to take, they also often force the game from entering “autoplay mode” (my phrase for trick taking games in which the next card to play is obvious).  The specialists ramp up the tension, the very element that makes for a good trick taking game.

The scoring system works exceptionally well, and in many ways it distinguishes Raven from mediocre trick taking games.  Some trick taking games put too much of a premium on making bid, and Raven strikes a nice balance between points for taking tricks and points for making bid.  Games tend to be close: we saw no instances of one player running away wildly with the lead.

Gameplay is typically fast-paced.  We prefer the short variant, which comes in between 15 and 20 minutes.  Regardless of which version is played, teaching time is short too: I can explain this game to those familiar with trick takers in less than two or three minutes.

I had never played with cards from Drive Thru Cards before, and the print quality and card quality was nice.  The artwork on the specialist cards was attractive, and the game came with three clever player aids: one to remember the trump suit based on the round; one to help players remember the bid values of the suits (shown above); and one to remember the setup for each player count.

Overall, I was really impressed by Raven.  This took the bidding system I loved in Ninety Nine, plus the specialist cards I love in Tichu, and mashed them together with an improved scoring system that equally rewards capturing tricks and meeting your bid.  I play a lot of trick taking games, and this is one of my favorite ones of recent years.