Sunday was the best day yet for me at the Gathering.  I met several new people and tried several cool games and prototypes.  Here’s my summary of today’s experience, plus a quick overview of what I played.

What games are people playing?

The three most widely played games seem to be Terraforming Mars, Century: Spice Road (which I walked through yesterday), and NMBR 9 (which I also walked through yesterday).  You can generally look around the big room and see multiple copies of Terraforming Mars getting played.  The same goes for Century: Spice Road, which has been an enormous hit, with many people buying copies.  NMBR 9 seems to be a popular filler game.

Sagrada also seems popular, and I’ve notices a few people go for multiple plays.  I walk through it below.

Yamatai — the new game from Days of Wonder and designers Bruno Cathala and Marc Paquien — has also been hitting quite a few tables.  I haven’t gotten to try it yet, but Dale discussed it in a post earlier today.

Several escape-room-in-a-box products seem to be popular.  Space Cowboy’s Unlock! has been played by a few groups.  And I saw at least three groups play Exit: The Game – Secret Lab.

Plus, there are prototypes everywhere, and you could probably go the whole convention only playing prototypes.  There are rules about disclosing prototypes, but each designer/publisher can (rightfully) restrict what information leaves the convention.  I’ll give as many details as I can below.

There’s a two-way tossup right now for my favorite game of the convention, and Werewords is one of the contenders.  Ted Alspach and Bezier Games have extended their werewolf intellectual property into a word-based social deduction game.  I’ll be doing a full review in the next few weeks, but here’s a quick overview.

One player is the mayor, and he or she will select a word — the app gives you several choices — and then, during the main part of gameplay, answer questions by handing out yes/no/maybe tokens.  The mayor also has one of the other roles in the game.

I’ve played this four times, and I’m impressed.  The game is brilliant, an awesome mashup of a word game and a social deduction game.  The comparison to Insider is obvious, but I think this is substantially different and substantially better.  It is simply more fun and effective to have one player working for the team (the seer) and one working against it (the werewolf) than just one person taking on both roles (as in Insider).

Werewords is streamlined and intuitive, and the app makes a huge different in moving gameplay along.  I especially like that you can pick the difficulty of the word.

The game is expected out this summer, and you can preorder it from Bezier. 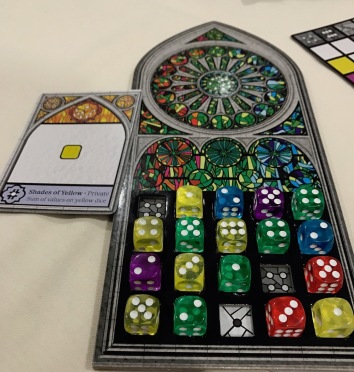 Sagrada is a cool dice placement game from Adrian Adamescu and Daryl Andrews.  I played with Larry Levy and James Miller, and we had a great time.  Players build beautiful stained glass windows by drafting dice.  The dice get placed on these cool player boards, and as you can see in the picture, there are restrictions about where they can be placed.  Some spaces require particular colors, others require particular numbers.  In either event, dice can’t be placed next to dice of the same color or pip count.

Based on the difficulty of your player board, you start the game with a number of tokens that can be used on tools to manipulate dice.

The game is a cool little puzzle mixed with dice drafting.  The artwork is beautiful, even if it does more closely resemble psychedelic artwork than a cathedral painting.  But the gameplay was simple and fast.

The game is shipping to Kickstarter backers soon.

Some Thoughts on Prototypes…

I’ve played several prototypes, and three of them have really stood out so far.

The first is Codenames Duet.  CGE and Vlaada Chvatil are still finalizing the design, but what I’ve seen so far is impressive.  This is a two-player cooperative version of Codenames, and it works exceptionally well.  Essentially, each player has a number of words to guess on their side, and there’s a timer to the game to keep players from just giving one-word clues.

It is surprisingly more tense than Codenames, and at least in the current form, it is quite challenging (which I like).  I played with CGE’s Jason Holt and Vlaada himself, and I had a great time.

Another prototype I played is tentatively titled “Middle Ages” and is being developed by Hans im Gluck.  I watched John Palagyi, Scott Alden, Lincoln Damerst, and Eric Martin play, and then me, Dale, Eric, and Alan How played.

The game is awesome, and when it is released at Essen, I predict it will be a big hit.  It is a card drafting game, and turns move very quickly.  The game is designed by Marc Andre of Splendor fame, and the game has a feel of some of his other titles. 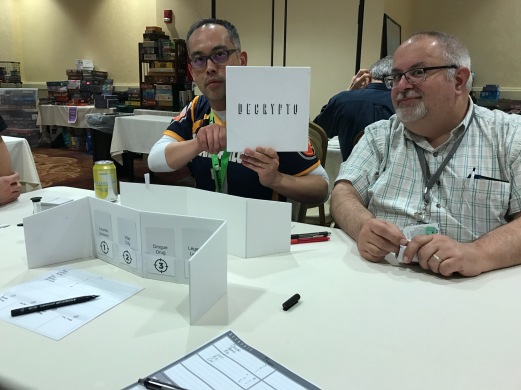 The night ended with playing Decrypto by Le Scorpion Masque.  This is another word-based deduction game that is really cool.  Between this, Werewords, and the Codenames lines, perhaps we’re living in the golden age of word games?

Each team has four words known to both team members but not the other side.  Each round, you get a card showing three of those words in a set order.  For example, you might get a card that says 3-1-2, which would mean the third, first, and second words on your screen  Your teammate then has to give three words or series of words that will lead you to say “3-1-2”.  But the other sides hears — and writes down — your clues, and before your partner can guess, they get a shot at guessing the number combination.  The first team to guess the other side’s combination a set number of times wins.  (Alternatively, the first team to mess up their own combination a set number of times loses.)

You have to be tricky about what clues you give.  In the first game, Dale and J.P. were able to deduce the word “Unicorn” after Adam and I gave the clues Dragon, Narwhal, and Elfenroads.  So then any future clue involving those words would probably be guessed by that team.  And even if they haven’t deduced the exact word, as long as they’re close, they can guess the number.  If they can nail down a couple of them, they can start going for the win.

It was a fascinating game and easy to learn.  I’m looking forward to getting a copy when it is published next year.